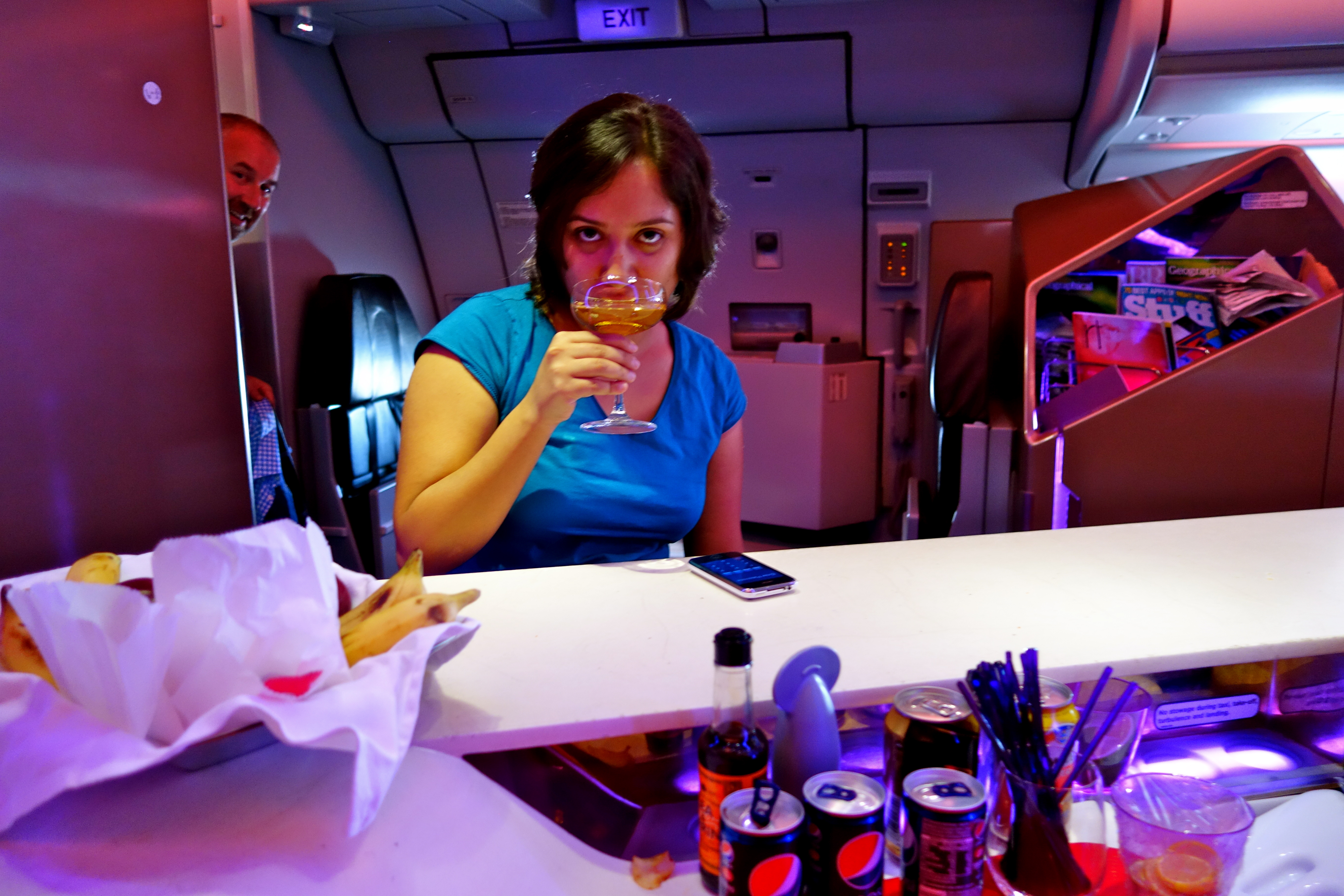 There are airlines that fly you from one part of the world to another. And then there is Virgin Atlantic. I consider myself one lucky soul to have journeyed from India via London to New York City on Virgin’s Upper Class.

After an exhausting week of tight deadlines, I wasn’t exactly looking forward to 17 hours of being cramped up in a plane. My already messed up sleep schedule was going to undergo a reversal of time zones. And my mind boggled with stories of how cumbersome entering the US as a single girl on a tourist visa with no fixed itinerary can be. Arriving at Delhi airport, I was on the verge of telling myself that I was over being a travel blogger.

Then she said it, the lady in red at the check-in counter, Ma’am, you’ve been upgraded to upper class! Oh you kind folks at Virgin Atlantic, the shooting star sends you a thousand wishes.

Now, I’ve flown business class before. I know full flat beds and gourmet meals and smiling air stewards. What I didn’t know was the difference in Richard Branson’s approach to flying. This wasn’t going to be just another journey.

What can make you feel more welcome than a glass of champagne even before the plane hits the skies? There I sat, stretching my feet, sipping the bubbly, scrolling through the movie selection, more relaxed than I had felt in days.

Warm welcome on board!

A private bar on board!

I could hardly believe my eyes when I saw a lounge bar, complete with dim soothing lights, bar stools, and fancy bottles, on board the plane, a few seats away from mine! Who cares if it was only late afternoon – you can’t say no to a cocktail at a bar like that when you’re 17,000 feet in the skies.

A bar in the skies.

An a-la-carte menu for meals

As a frequent flyer, you can hardly blame me for hating pre-packaged airline food, served in unappealing foil boxes with plastic cutlery. Imagine my joy when I received an in-flight a la carte menu I could choose from and make my own meal? Though the vegetarian selection had fewer options, my choice of a grilled veggies salad and cottage cheese curry, aesthetically served, was more than gratifying.

An appetizer of grilled veggies before a hearty meal.

After a hearty meal and a fair few drinks, I was ready to rest my heavy eyes. I was figuring out how to make the seat full flat, when an air hostess offered to “make my bed”. I felt the glee of a little kid as she flipped the seat into a cushioned full flat bed, covered it with a fluffy white mattress, laid a pillow, and tucked me into a cosy white blanket. I was no longer sure if I was on a flight or a fancy hotel.

My cosy bed in the skies.

I woke up to the aroma of freshly brewed peppermint tea, cookies, sandwiches and hot street snacks. High tea was being served, and I could feel London calling.

The Virgin Clubhouse at Heathrow Airport

I only had a two hour transit at Heathrow Airport in London, and some frequent flyers on Twitter warned me that I would have no time to check out the famous Virgin Clubhouse (upper class lounge) in the mad rush of changing flights. But, the transit security check went by quickly, and there I was, overawed by the sheer grandeur of not just an airport lounge. Creative seating spaces, a poolside lounge, an observation deck, a swanky bar, a library, pool tables, a spa, a beauty salon, a deli serving delicious bakery products, it had it all. Hell, it even had a rooftop bar! For once in my life, I wished I had a longer transit.

The only picture I could sneak in of the Virgin Clubhouse.

This flight made me feel like something of a celebrity! But truth be told, it was the little things that made a fancy flight experience perfect:

Afternoon flights: Unlike most international airlines with dreadful early morning flights, Virgin Atlantic flies from Delhi at 1 pm in the afternoon. That means you can spend the flight watching movies, eating, drinking and making merry, rather than trying to catch up on sleep.

Movie munchies: When you’re engrossed in a movie, the cabin crew surprises you with little touches like an ice cream!

Privacy and aisle access: Every seat (cabin) on Upper Class has a privacy screen and aisle access, so you don’t have to get along with a nosy co-passenger or feel guilty about constantly disturbing someone to use the restroom. And if you feel lonely, you have the bar area to socialize.

The cabin crew: The most friendly flight attendants I’ve come across in a long time. I guess they have to be nicer to upper class passengers, but there was something genuine in their interaction that I haven’t come across often while flying.

Good movie and a better meal. What more can a flyer ask for?

The night I reached New York (and had no trouble entering the country on my tourist visa, thank you very much), I felt rejuvenated, with only mild traces of jet lag. As though I hadn’t just taken a 17 hour flight across the globe, but experienced another world in the skies.

Note: I was hosted by Virgin Atlantic on my flight from New Delhi to New York. Lucky me!

Have you ever flown Virgin Atlantic? Is it on your wish list?