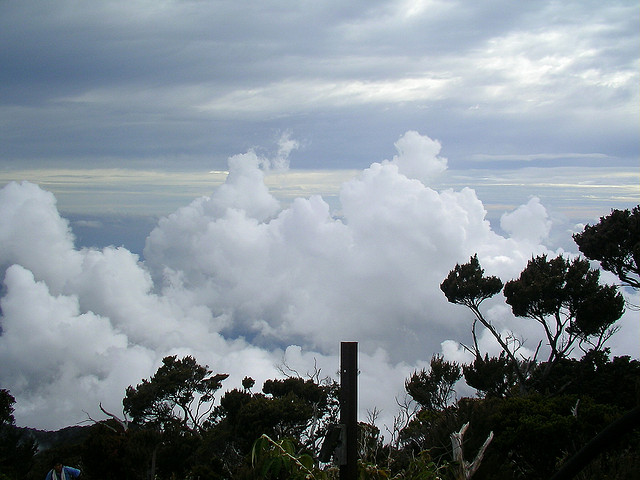 I wrote this story for Tourism Malaysia and Travel Wire Asia.

Few travel adventures in my life have come close to the experience of climbing the twentieth highest peak in Asia – Mount Kinabalu in Malaysia’s half of Borneo. It was exciting, daunting, exhilarating and surreal, in that order. It was where I turned 21.

After a month of light training on the steps of the 12 floors of our apartment, my brother & I flew to Borneo, and arrived at the Timpohon Gate, located 90 km from Kinabalu National Park. We didn’t know then, but this national park is reason enough to visit Eastern Malaysia; beaches, islands, wildlife, the region has it all. After a compulsory briefing, we were assigned our guide, a small-built lady called Yeta, who I would come to know and admire during the course of our climb. We were each handed a walking stick, which we looked ridiculously at first, and later thanked our stars for carrying.

A glimpse of Mount Kinabalu from the base.

The first day’s target was to climb 6 km horizontally and 1.3 km vertically. The initial stretch was relatively easy, alternating between flat clearings and small steps, amid tall trees and dense vegetation. The second half was more taxing, with steeply inclined rocks and steps, where shrubs and bushes gradually replaced the trees. The trick was to save as much energy as possible by finding alternative ways to climb the steps, using small rocks and rubble as stepping-stones, and by relying on the walking stick for support. The higher we ascended, the more scenic the views became, and we found ourselves shrouded in mist along many stretches. I would typically describe it as breathtaking, but I must reserve the term for the summit.

It is mandatory for all climbers aiming for the peak to spend the night at Laban Rata, the midway point, or at one of its subsidiary guesthouses, before resuming the climb early the next morning. We arrived at Laban Rata in good time, just before twilight, to catch an eloquent mountain sunset and tuck in for a few hours; on adventures like these, even some scanty hours of rest are a blessing to sore muscles. At 2 am the next morning, the entire guesthouse (housing about 20-25 climbers) started brimming with activity. Over the course of the night, the weather had become chilly, so much that even thick woolen gloves offered little much protection from the cold. Wrapped in all the clothes we had carried, my brother and I set out with our guide, determined to conquer the peak. After all, it was the beginning of a new year of life for me (I turned 21 at midnight), and I wanted to welcome it in style.

At Laban Rata, our halfway halt.

The dark of the night was lit by a trail of several small torchlights making their way up, visible every now and then through crevices and corners. If the first 6 km were challenging, the next 3 were almost terrifying! With our torches clutched between our teeth, we grabbed climbing ropes from stretch to stretch, trying to get a grip on the bare rock of the mountain. I hadn’t experienced such thrill, such adrenalin rush in all my twenty years. The dark though, admittedly made the terrain less daunting, a realization that would dawn on me later.

By about 6 am, after deciding to give up a few times, and after battling the wind and the rain for a good half hour, we conquered the last stretch with huge rocks and no ropes. That was it! Low Peak; 4095 m; the fourth highest in Southeast Asia; the 20th highest in all of Asia; the only that I might ever conquer; spectacular. We were above the clouds, almost touching the sky, and watching the most breathtaking sunrise of our lives. The round of the sun gradually emerged, it’s rays distinctively penetrating the air, a salute to all creation, a promise that nothing is significant enough, an assurance that this is life. My words really can’t do justice to that feeling of being at the top of the world, literally. It is here, on Mount Kinabalu’s peak, that I began my 21st year of life, and my endless thirst for adventure.

Last stretch of the ascent.

There, but not yet there.

The climb down wasn’t my favorite part at all. The 900 m we had climbed since the morning of the descent almost put my entire life into perspective. In the light of the sun, I could now see clearly the vertical terrain we had climbed, and that now lay for us to climb down. One slip was all it would’ve taken, to unite with creation again, somewhere up there. It was a numbing feeling. In restrospect, I don’t know how I made it back; perhaps a little determination, lots of good luck, and definitely a helping hand from our guide Yeta. Yeta came from a village at the foot of these mountains, and had been a guide for 12 years. She climbed this mountain, on an average, twice a week, so by rough calculations, she had done the trail 500 times! Phew.

Light breakfast, wobbling feet and 6 hours later, we made it back to our starting point, proud and tired. Life can be short, I know, but it can also be the single most intoxicating experience.

Your turn, what was your most adventurous birthday?