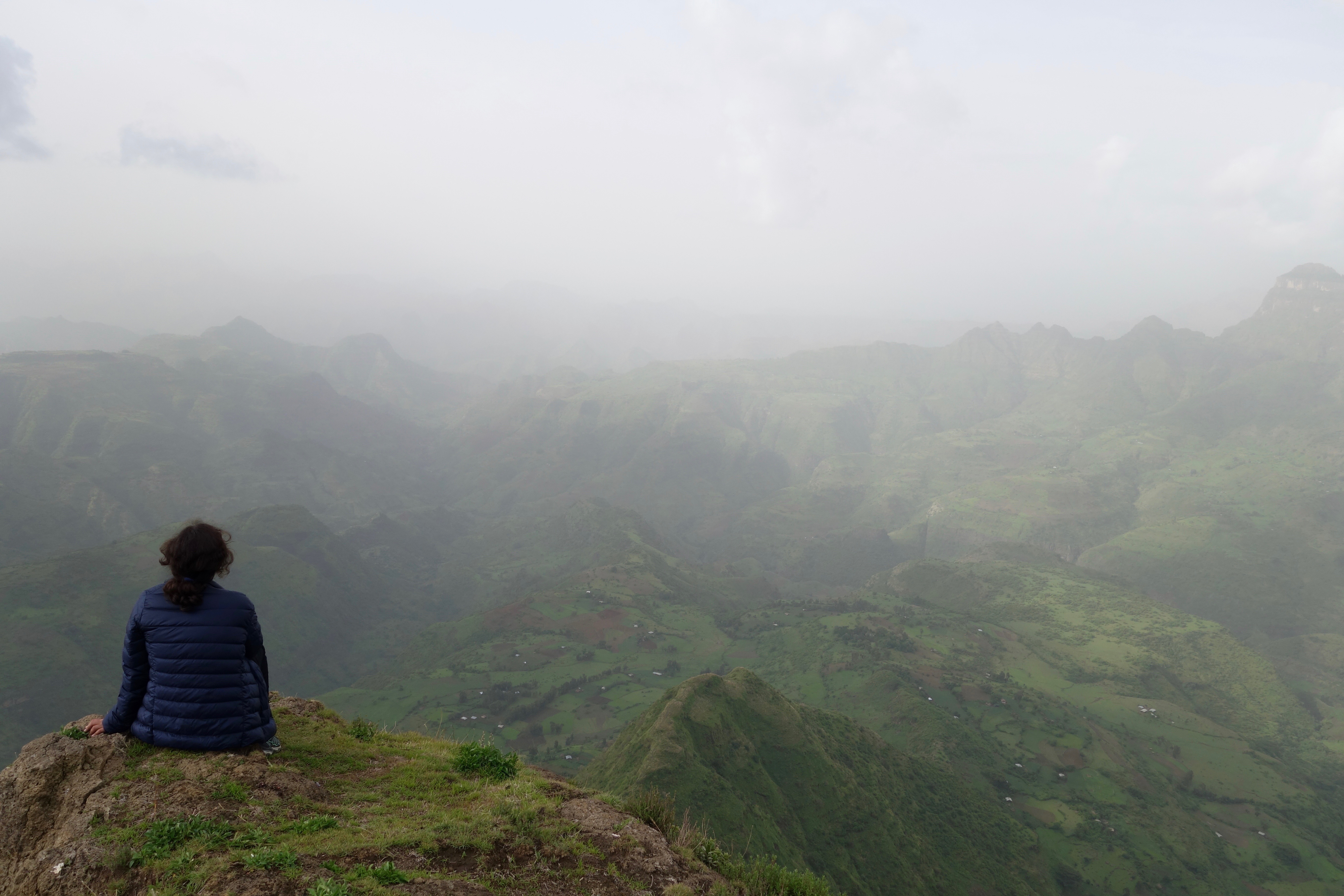 My first distinct memory of Ethiopia is standing on a cliff in the Simien Mountains, looking down at tiny highland villages dotting the valley on one side, vast green farm land on the other, volcanic mountains surrounding me, and thick-billed white-headed ravens flying above. I’m in the heart of Africa, I thought to myself as I watched the mist roll in; after dreaming about this part of the world for a long time, I’m finally here.

When I impulsively opted for a flight to Addis Ababa from Mauritius, I thought I was ready for East Africa after all the years I’ve spent travelling in India and Central America. And in some ways, I was. But even as I hiked in the vast, misty wilderness of the Simien Mountains and started appreciating the unique spirit of Addis Ababa, I failed to build a deep connection with the country and its people. I left Ethiopia after 3 weeks – earlier than I had anticipated – but I know I’ll go back someday, with more time, money and perhaps maturity, to rekindle the spark I felt in my initial days.

These are my first impressions, and why I felt challenged over the course of my travels:

A monk deep in prayers in an underground church in Lalibela.

Existential questions like who we are and where we come from, often plague the introspective amongst us. Ethiopia has some deep answers buried in its midst, and here, in the birthplace of mankind, I had the rare feeling that I’m travelling through time. In a 900-year-old underground church cut into a rock in Lalibela, I was lucky enough to witness a special ceremony with men in white robes chanting hypnotically and beating drums, as the rocks echoed their music. Mountain villages on the countryside near the Simiens felt stuck in time, with men and women wearing bright, flowing clothes, hanging out outside their earthy homes with their cattle.

A local shared with me the irony of Ethiopia being the place where the world began, and yet somehow, fell off the world map into obscurity. I’m glad it found its way onto my map.

Addis Ababa reminds me of India in the 90s.

A double rainbow on my way out of Addis!

Landing in Addis Ababa, the capital city, was a bit like travelling back to ‘urban’ India in the early 90s. Soviet-era cars ply as taxis, there is only one telecom operator in the country, and you see no known international brands anywhere! I quickly learnt that Ethiopia is the only country in Africa to have never been colonized, and the people, proud of their independence, aren’t too open to foreign influence. Except for a bit of infrastructure developed by China, things are rolling slowly, which means even Addis has the small town feeling that Indian cities once had.

Also read: Romania, You Can Fool the World With Your Smiles, But Not With Your Heart

Ethiopia might have the world’s finest cuisine for vegans (and any foodie).

A traditional fasting beyaynetu served on injera, made of steamed teff.

Confession: I chose to travel to Ethiopia because I’ve been in love with Ethiopian cuisine since I first tried it in New York City. I expected to eat well as a vegan, but imagine my delight when I learnt that their Orthodox Christianity beliefs have most locals eating fasting food (aka no animal products) for several parts of the year; the idea is similar to lent, where believers are expected to give up on food they relish, eat ‘simple’ meals, and feel the suffering of their fellows. That means I could walk into any restaurant – Ethiopian or otherwise – in the country and ask for fasting food, without having to explain that I don’t eat meat, seafood, dairy or eggs.

I still salivate at the thought of fasting beyaynetus (a spread of vegan dishes served on injera), shiro (pureed chickpeas served on injera) and firfir (injera fried with berbere); I even found fasting cupcakes and other bakery delights. It’s been my easiest and most delightful country as a vegan thus far!

It’s not a place for digital nomads or slow travel.

Accommodations are either too basic or too expensive, and wifi is rare.

My home, office and oasis in Addis Ababa.

It didn’t take me long to realize that (my kind of) slow travel was going to be difficult in Ethiopia. I had intended to spend several weeks on the countryside, getting a feel of the local culture while working on the go, but I found that accommodations are either too basic or too expensive (sometimes even the expensive ones are pretty basic), public transport connectivity is limited, private taxis are extremely expensive (150-200$ a day), and hitch-hiking is uncommon. And most importantly, for a digital nomad like me who makes her living on the go, wifi is rare and exorbitantly priced (16$ for 2GB). That meant I had to use Addis as a base, and leach on the wifi offered by big hotels in their coffee shops. On the bright side, that means people still talk to each other in cafes instead of staring into their screens 😉

It’s safe to travel solo if you keep your wits about you.

iPhones cost 3 times the regular price in Addis, and are common pickpocketing targets.

With newfound friends, Genetu and Indak.

If I’m completely honest, I was pretty darn scared the night I landed in Addis. In the course of my journey from the airport to my friend’s place, I heard atleast five different stories of how people (or their friends) had their iPhones flicked while walking or taking a cab at night in the city. Possessive of my own iPhone, I didn’t take it with me the first few times I ventured out! But I quickly realized that pickpocketing in Addis is about as common as it is in say, Delhi; you’ll be fine if you keep your wits about you.

Although I felt safe going solo into the Simiens and Lalibela, I found it hard to strike a genuine conversation with locals; almost every time a conversation ensued, it turned out to be an elaborate front to ask for money. Given the income disparity, it’s totally understandable, but after a while, I felt frustrated and put my guard up. I kept wondering if that’s how foreigners traveling in India feel too?

You need to be a mature traveller to truly soak in the beauty of Ethiopia.

While leaving, I felt like I’m not that traveller yet.

Soaking in the wild beauty of the Simien Mountains.

Due to my lack of research, I ended up spending far more money than I had anticipated, and ultimately decided to cut short my trip in East Africa (I’m spending the last leg in Zanzibar, Tanzania). The more I think about it, the more I feel like I haven’t matured enough as a traveller to take on East Africa – and by maturity, I mean, someone who’s learnt to travel deep enough in a different country to really understand its way of life. The next time I go back, I’ll try to find a more meaningful way to connect with the people, for that’s where the beauty of travel truly lies.

Where have you felt the most challenged on your travels?

Back in 2015, when I decided to turn vegan and eliminate all animal products from my diet and lifestyle as far as I could help it, I wondered how my travels in India would pan out.
I’ve been lucky enough to experience, collaborate with and stay in many unique abodes during the course of my travels, both in India and other parts of the world. But few come close to the vision and experience @cghearthswaswara in Karnataka 🌱 Here luxury coexists with nature, protecting it, blending into it, rather than trampling over it.
It took me a long time to question, understand and embrace body positivity.
I’ve been thinking a lot about how to evolve my travel blog in this new normal.
Hello from my incredible meditation abode @cghearthswaswara 👋🏼
I’m about to complete my 33rd revolution around the sun! 😲🌏

Back in 2015, when I decided to turn vegan and eliminate all animal products from my diet and lifestyle as far as I could help it, I wondered how my travels in India would pan out.
I’ve been lucky enough to experience, collaborate with and stay in many unique abodes during the course of my travels, both in India and other parts of the world. But few come close to the vision and experience @cghearthswaswara in Karnataka 🌱 Here luxury coexists with nature, protecting it, blending into it, rather than trampling over it.
It took me a long time to question, understand and embrace body positivity.
I’ve been thinking a lot about how to evolve my travel blog in this new normal.
Hello from my incredible meditation abode @cghearthswaswara 👋🏼
I’m about to complete my 33rd revolution around the sun! 😲🌏