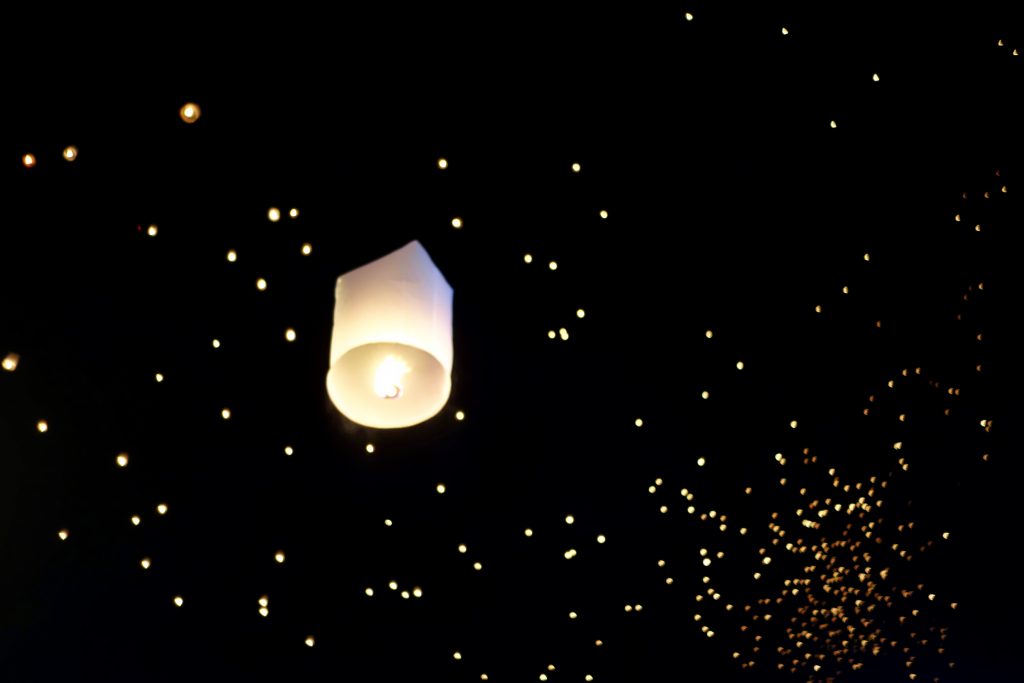 New Years eve Chiang Mai 2017: I found myself at the Chiang Mai lantern festival on 31st December as the clock announced New Year’s eve! In this post, I’ve penned down tips for Chiang Mai in December and Chiang Mai on New Years.

IMPORTANT – Update 2018: After learning about the harmful impact of the Chiang Mai lantern festival, I highly recommend that you don’t buy a sky lantern and release it into the sky. It causes air pollution, adds to the city’s growing waste problem and is a fire hazard.

I’ve also learnt that Yee Peng and the lantern release on New Year’s Eve in Chiang Mai are not traditional festivities – but devised for tourists. Please read this detailed post on “Why I don’t recommend celebrating the Lantern Festival in Chiang Mai” and make an informed decision.

I stood on a parapet watching in awe, surrounded by people as they cheered and counted down to the New Year. Almost everyone had lit their paper lanterns by now, and as the clock ticked to midnight and firecrackers went off in the sky, we released our lanterns with a feeling of joy that’s difficult to put into words.

As the lanterns drifted away into the sky, creating the illusion of a thousand twinkling stars, I felt like parts of my past, and all the fears and challenges of 2017, had drifted away too. A surreal feeling.

Behold, a glimpse of the magic of celebrating New Year’s Eve in Chiang Mai, Thailand:

In the past three years, I’ve rung in the New Year in the strangest of ways – in 2016, laying out alone under a canopy of trees in rural Maharashtra, trying to see the stars from the gaps in between; in 2015, falling asleep before midnight in Sri Lanka; in 2014, in the visa-on-arrival queue in Bangkok after my Dubai plans fell through!

So as I stood in a Buddhist temple, holding my first paper lantern (thanks to this post I stumbled upon), waiting to let it go (usually takes 3-4 minutes after you set alight the waxy thing below), I knew this is finally going to be a New Year’s Eve to remember.

Also see: My Most Memorable Sunrises, Sunsets and Night Skies of 2016

Legend has it that the first paper lantern was built and released by a Chinese military man in the third century, with a message asking for help against an enemy that had surrounded their platoon!

These days, in Thailand, many locals believe that releasing a lantern will release their worries and fears, while I’ve heard that for Buddhist monks, the release tends to get them closer to the path of enlightenment.

Also read: Lessons on the Art of Living, in Sri Lanka’s Hill Country

They say the Yee Peng Lantern Festival in Chiang Mai sees many more people and lanterns, but surrounded by the crowds at Tha Phae Gate, that was hard to believe!

As my lantern slowly drifted away into the sky, it made me feel like I was letting go… of the materialistic things I’ve been holding on to, ugly memories of the past and 2017 itself.

Then the sky filled with a thousand lanterns and wishes, making me forget that I usually can’t stand crowded, noisy places. As I gazed up at the lanterns, an indescribable feeling washed over me.

Video: The magic of New Year’s Eve in Chiang Mai!

I made a short video trying to capture that feeling, of watching thousands of lanterns drift away in the dark night sky. Wish you an enchanting 2018!

Update 2018: I decided to delete this video, for I no longer recommend celebrating the festival.

Where to celebrate: Tha Phae Gate in the old city of Chiang Mai is the centre of the celebrations. People start gathering from 7 pm onwards, till past midnight. If you arrive early, go to some of the nearby Buddhist temples to experience some relaxing Buddhist chanting.

Environmental impact of paper lanterns: The lanterns are primarily made of rice paper, and have a thin wire below on which is attached a small piece of wax, to be set alight to release the lantern. Hot air created by the flames pushes the lantern up in the air. The paper is biodegradable; the wire is not. According to the Guardian, sky lanterns have been banned in Vietnam.

Are you thinking of celebrating New Year’s Eve in Chiang Mai?