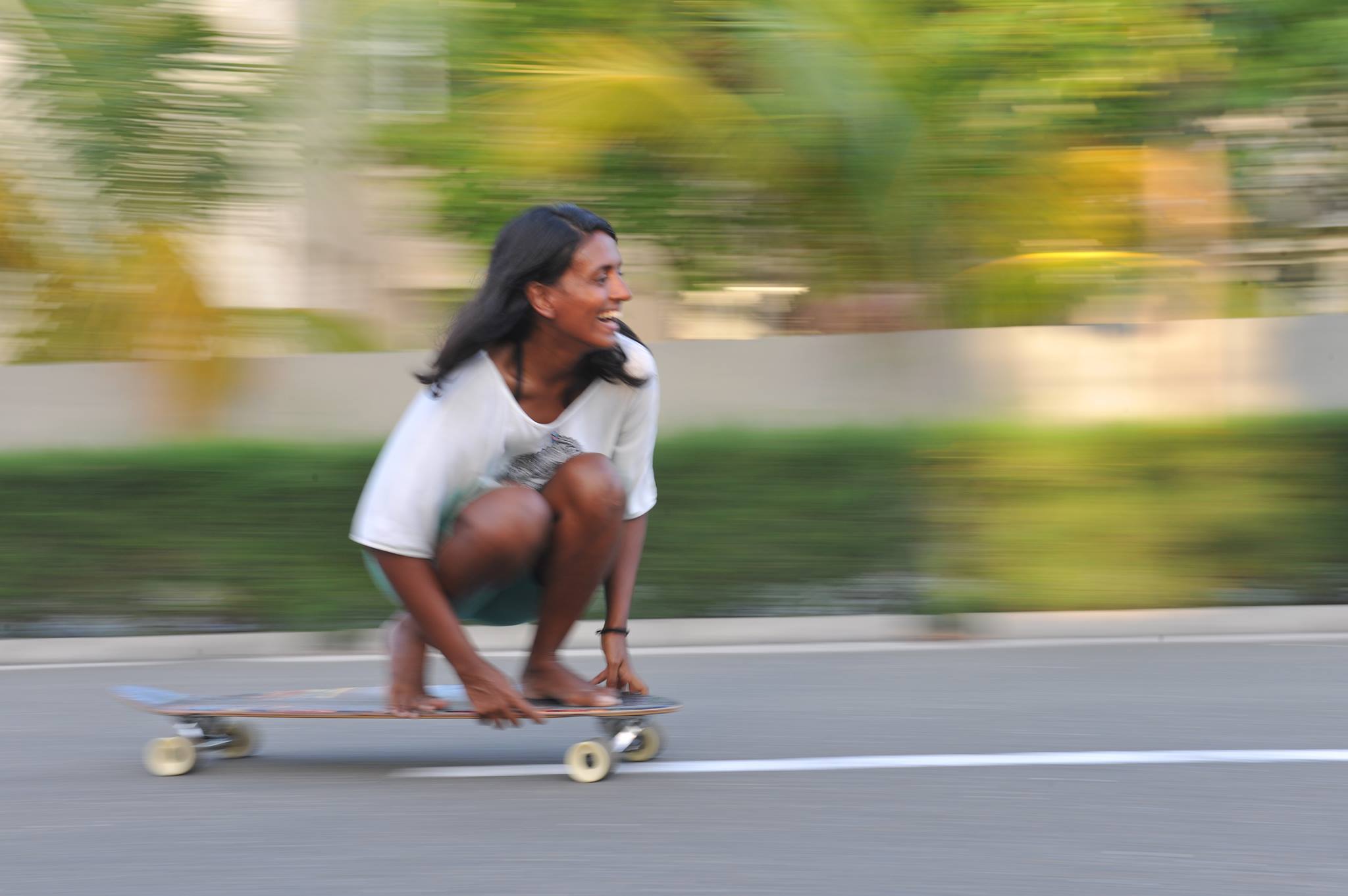 While living on a local island in the Maldives, I met Mariyam Niuma – the inspiring first female Maldives solo traveller and surf photographer.

When I first met Niuma (Mariyam Niuma), she was renting a small house on a local island in the Maldives, spending her days surfing in the warm waves of the Indian Ocean. As she spoke of her laidback life, I began yearning to live out my hideaway island dream too.

We were at the World Travel Writers Conference in the Maldives, where I was speaking on a travel panel about storytelling. We stole a few moments to chat about our recent adventures and the similar battles we had fought at home to chase our dream of travelling the world.

But I never truly understood her battles until I spent a couple of weeks living in a small guesthouse on Maalhos, a local Maldivian island, a few months later. Unlike “resort islands” – private islands occupied by a tourist resort – local islands offer an intimate glimpse into daily life in the Maldives.

It was on Maalhos that I realized that most Maldivian women, including young girls, are expected to fully cover up their bodies even under the hot tropical sun. That their ambitions are often limited to becoming teachers, though most of them only end up fulfilling the duties of a wife. That even though the pristine blue ocean is in their backyard, they are shy (and often not permitted) to join the boys and men to learn to swim, surf, snorkel or dive.

So I had to meet Niuma again – the first female solo traveller, couchsurfer and female surf photographer from the Maldives – over drinks in Male, speak to her about her unconventional life of travel and share her inspiring story with you:

Niuma’s love affair with the ocean began as a little kid, when on long ferry rides from Male to her father’s island village, she imagined herself as a mermaid!

She has travelled solo across Southeast Asia, crewed a sailboat from Malaysia to Thailand, taken surf lessons in Morocco, crossed 96 islands on foot in the Maldives and honed her surf photography skills to become Maldives’ first female surf photographer.

When I reached out to her for this story, she was sailing on a 45-foot catamaran on a two day adventure from the Maldives to India!

Her tryst with travel began in 2004, when she won return tickets to Colombo on Emirates. She was so stoked by the win that she decided to fight her fears and go solo to Sri Lanka. She loved it, and eventually saved enough money to move to Sri Lanka for college, where she began experimenting with couchsurfing on her travels – becoming the first couchsurfer from the Maldives!

Upon returning home, she scored short-term work gigs of six months to a year – with NGOs, environmental organisations and high-end resorts – and saved up what she earned to travel in between. She took courses in surfing and diving, and invested in professional gear for surf photography.

This paved the way for her to live at surf spots in Pondicherry, Morocco, Sri Lanka and the Maldives, where she would learn surfing in exchange for her work as a photographer – and gradually begin earning a living as a surf guide and surf photographer.

Also read: How I’m Funding My Adventures Around the World Through Travel Blogging

Try to get out of your comfort zone as much as possible. Try many things and fail many times. Try to identify your why. ~ Niuma

Back when she first travelled out of the Maldives, Niuma said she felt like she somehow attracted people who supported her dreams. But the more she travelled, the more she realised how different she was. Everyone she grew up with was getting married and having babies and doing ‘normal’ things.

Apart from the burden that society placed on her, being in the surf industry and working as a surf photographer and guide, came with many challenges. She didn’t feel accepted in the local community for a long time. But her work built her reputation, and gradually people warmed up to the idea of supporting a Maldivian woman who was making it on her own.

Also read: Why You Shouldn’t Put Off Your Travel Dreams

On fears/challenges and conquering them

I think it all comes down to our fears. After I moved out of home in 2011, I realised that I carried around a lot of fears – about relationships, failures, living on my own, society’s expectations – all which I had to face and let go. ~ Niuma

Niuma had been wanting to dive and surf since she was a kid, but it was only at age 28 that she learnt how to swim! She couldn’t let her eye glasses get in the way of her dream, so she saved up for a laser surgery.

She pushed her comfort zone to finally learn surfing at 32, despite the fear of getting injured in a foreign country as she travelled on her own. But going for a wave felt incredibly liberating to her, even if she got injured while surfing in Morocco and had to nurse herself back to health.

Niuma: “Why do you want a certain thing in life? I want a life of adventure because it makes me feel alive instead of just living a life where you get up to go to work and that’s it, or you go on a holiday once a year and that’s it.

There is a whole world out there, full of amazing experiences. Make connections, learn new skills on the internet (so many free resources), ask questions from people who are doing it. It doesn’t take a lot of money to follow your dream. You just need to put in a little effort and chase it proactively. Save up and start small. Your confidence will build for bigger things.

Make a list of things you want to do in life and tick them off one by one because one day you will wake up and wonder why you haven’t done anything with your life. Do something towards your dream today.”

Also read: Solo Travel: To Go or Not To Go?

Back in 2011, when I first began to travel solo, it felt like a lonely space. I wondered if I was the only one crazy enough to venture out on my own – especially as a 20-something Indian woman.

But over time, I’ve been lucky enough to cross paths with solo travellers from around the world, but especially from Asia. Yet in the online travel arena, non-white solo travellers continue to be a minority.

In this new monthly blog series, I hope to share with you inspiring stories of solo travellers from across Asia, especially women. Growing up in protective families and a conservative society, our battles are different, yet not impossible to fight.

Do you feel inspired by this Maldives solo traveller? Have you ever gone on a solo trip? Why or why not?

This post is part of my Solo Travellers Series – which aims to shed the spotlight on solo travellers from across Asia. Courageous souls who are challenging conventions in their own fierce ways yet typically underrepresented in the travel space.

If you’ve met inspiring solo travellers from Asia who I could consider featuring in this series, please connect us!

Other posts from the solo travel series

Meet the Courageous Indian Woman Travelling the World Solo – On a Wheelchair.

Thanks to Mariyam Niuma and Remya Padmadas for their inputs.