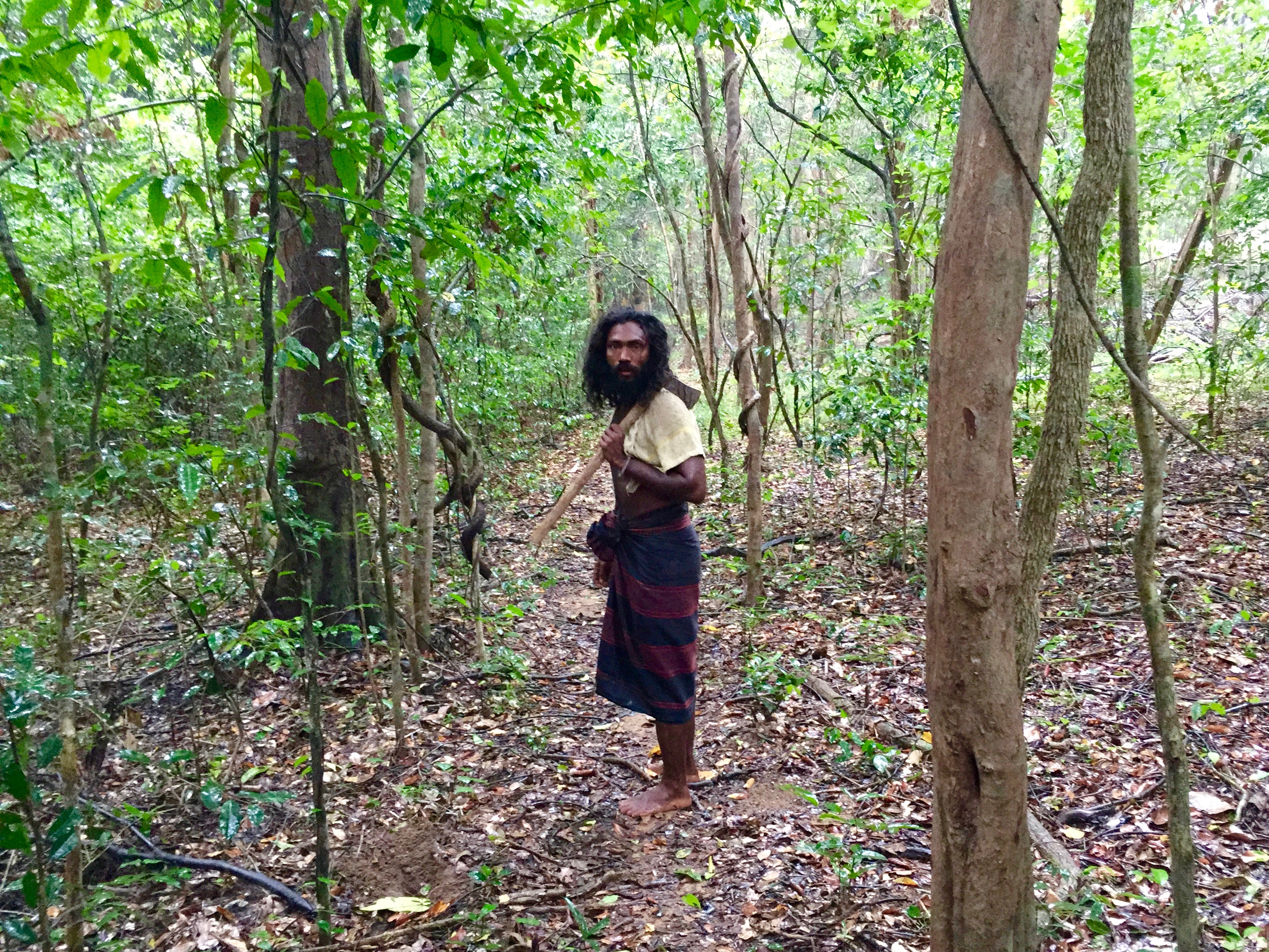 In Gal Oya National Park, a fascinating encounter with the Vedda tribe and the poachers turned conservationists at Gal Oya Lodge.

The first thing I noticed about him was the fresh blood stain on his shoulder rag. That must be from breakfast, our naturalist mused, not really joking.

Under an ominous grey morning sky, we tried keeping up with him as he scampered through overgrown wilderness, crossed a stream and scrambled up slippery rocks to the top of a hill with a natural cave.

This was home, he said in Sinhalese, and revealed his beetle-stained teeth in a wide smile. He was the son of the chief of the Vedda tribe – the last surviving indigenous forest dwellers of Sri Lanka.

Also read: Lessons on the Art of Living in Sri Lanka’s Hill Country

He casually flipped his black, curly hair and let them fall messily on his shoulders, almost forming a crown for his short, lean figure. He walked barefoot, wearing nothing but a loincloth around his waist and a worn-out axe resting hands-free on his shoulder rag.

And that’s the kitchen, he pointed vaguely to a rock, carelessly crushing betel nut in his palm.

Confused, I turned to our naturalist, who asked me to come closer, and had me stare down a precariously cut hole in the rock. Filled with wild honey, this is how the Veddas preserved meat.

Deep within the forests of Gal Oya National Park, the Vedda people lived for centuries, hunting wild animals yet living in harmony with nature.

Then a few decades ago, the government incentivised the Vedda men and women to move out of their caves to mud houses at the edge of the forest and send their children to tribal schools. In an attempt to support their traditional ways, the government gave them permission to hunt wild animals like they had always done – but only using traditional bows and arrows!

While some older Veddas continue to live in their cave homes, most younger ones grew up in caves but now live in mud houses. They send their kids to school, speak their own language but also fluent Sinhalese and have grown to enjoy rice and curry along with honey-cured meat.

What about wild elephants? I asked, for that’s what had compelled us to make the 4 hour journey. We took the only local bus from Kandy, and journeyed on broken roads towards the remote wilderness of Gal Oya National Park, near Sri Lanka’s east coast .

Turns out, the Veddas can feel a wild elephant’s presence for miles, even smell it the wind!

In a local paper, I would later read the unbelievable tale of a Sinhalese forest surveyer who had spent months in the 1970s tracking wild elephants with help from the Veddas. They always walked with the wind in their faces so the Veddas could sniff out any elephants approaching them and change direction accordingly.

As we were about to say goodbye, I asked our tribal friend if his people still play their traditional music. He nodded, then casually walked away into the forest.

Later that night, while having dinner at Gal Oya Lodge, an elderly Vedda silently entered with a flute. Apparently he had made it that very evening using local wood, on hearing of my curiosity about their folk music!

He sat in a corner and played soulful tunes passed down by his forefathers. Tunes they used to create harmony with wild animals.

In those moments, as his music flowed through my veins, I felt a strange sense of sadness about the erosion of man’s connection with nature. Indeed, the forest traditions of the Veddas will likely disappear with this generation. But as a city dweller who seeks modern comforts, who am I to judge?

The next day, we hopped on a boat safari on Senanayake Samudraya, Sri Lanka’s largest manmade lake in Gal Oya National Park.

When the lake split the forest, the native wild elephants taught themselves to swim from island to island in search of food!

Much to our amazement, we spotted two wild elephants on a tiny island on the far side of the lake. Presumably waiting for the post-rain water level to subside before continuing their island hopping.

We already saw how Gal Oya Lodge, our luxurious refuge in a private 20-acre forest, is bringing into the limelight the way of life of the Veddas.

But we’d later hear about their brilliant attempt at the conservation of wild Asian Elephants. The lodge hired some of the park’s most notorious poachers as their staff. Not only do they know the forests (and the movement of other poachers) better than anyone else, they also act as the park’s guardians since their living now depends on it.

Also read: What India (and the World) Can Learn from Sustainable Tourism in Kerala

Back at the lodge, as I took a cooling dip in the dramatic backdrop of an elephant-shaped peak, I was filled with a sense of fascination. What other secrets might the forests of Sri Lanka harbor?

How to get there

The nearest big city is Kandy. Take the local bus from Kandy to Ampara via Bibile to get there. We caught a bus at 11 am, but check the local timetable for updated timings.

Gal Oya eco lodge – built with locally sourced natural materials on the principles of responsible travel – is the only accommodation in the vicinity of Gal Oya National Park. They work closely with the local communities and on conservation issues. We absolutely loved our stay there and hope to go back someday.

Gal Oya is probably one of the world’s most unique national parks in that it can be explored on the water! The Gal Oya boat safari on the stunning Senanayake Samudra lake is a once-in-a-lifetime chance to witness wild elephants swimming from island to island. If you’re lucky, you might even spot a leopard, sloth bear or macaque in the forest.

Have you encountered indigenous ways of life on your travels?

Note: We were hosted on these adventures by Gal Oya Lodge. Lucky us!