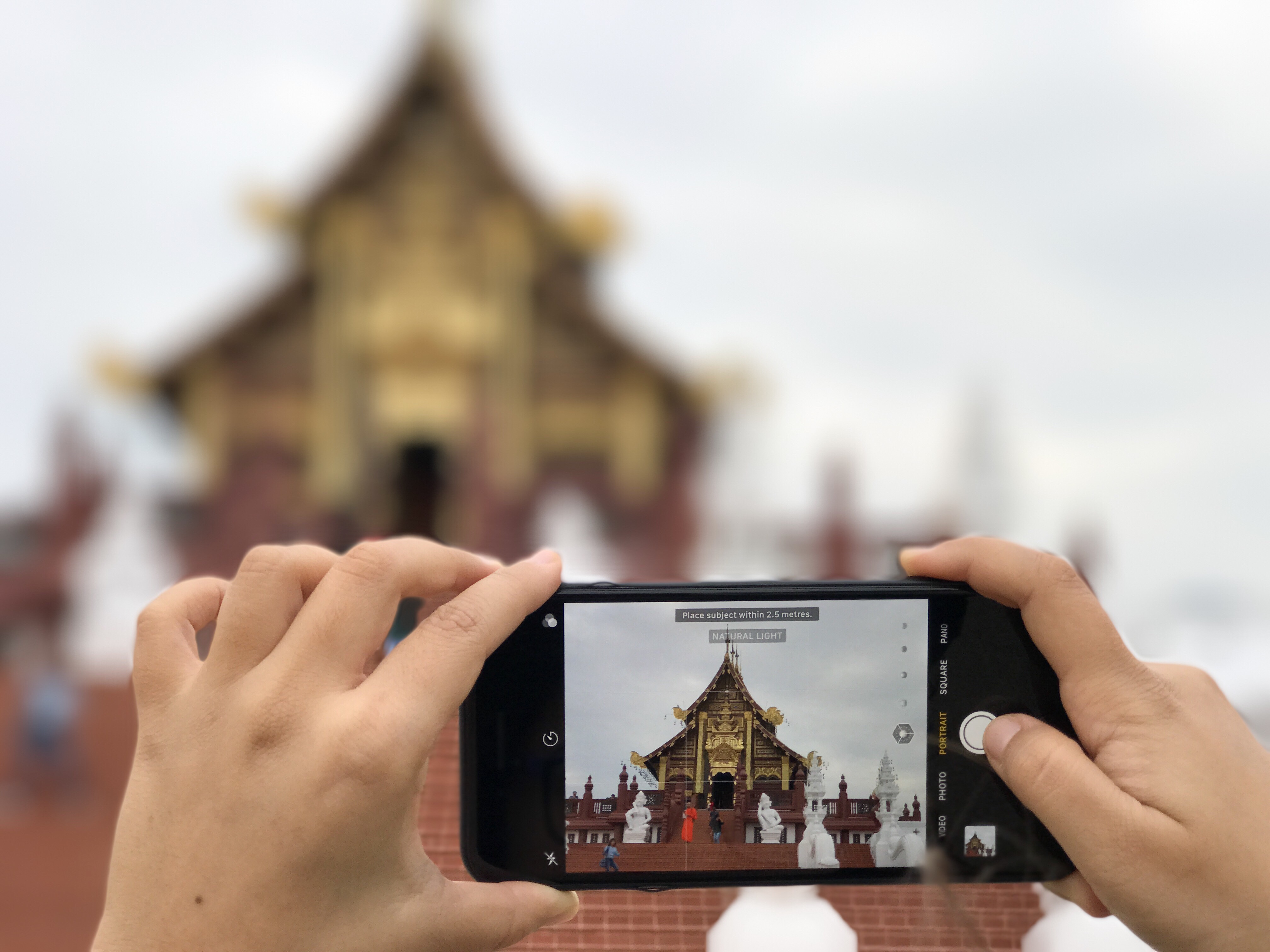 About this post: I spent an afternoon at the Wat Suan Dok Monk Chat in Chiang Mai, Thailand, learning about the Buddhist philosophy on life and detachment. In an attempt to go beyond Buddhist temples in Chiang Mai, the monk chat in Chiang Mai was not only an introduction to Buddhism but also a deeper glimpse into Wat Suan Dok and the life of monks who reside there – an offbeat Chiang Mai experience that I highly recommend!

Being constantly on the road, my perspectives about life and death are also constantly evolving.

In Honduras, among the Garifuna people, I learnt to view death as a celebration; in Uttarakhand, I experienced the joy of living away from man but close to nature. Autumn in New York let me view death through the lens of fall colors; Jordan helped me rediscover our original nomadic way of life.

So I suppose I walked in through the open wooden doors of Wat Suan Dok – a Buddhist temple in Chiang Mai, Northern Thailand – looking for a theological perspective on existential questions about life and death. Every afternoon, the university housed at Wat Suan Dok welcomes curious travellers for a “Monk Chat” in Chiang Mai – to interact with Buddhist monks for a short while, who in turn, get a chance to practice their English.

A monk at the Royal Park Rajapruek in Chiang Mai.

The monks I chatted with, most of them novices and not yet committed to a lifetime of monkhood, were a mixed bunch. One had grown up in Chiang Mai , another on the surrounding countryside, one in Nepal – who happily chatted in Hindi, another in neighboring Laos. Most of them seemed to be in their late twenties or early thirties, and had been asked by their family to study Buddhism.

My mind flooded with questions as I sat there, among the orange-robed monks of Wat Suan Dok. But the day before the Monk Chat in Chiang Mai, I also asked my readers – over on Instagram – if you had any burning questions you wanted me to ask them.

Here are all the pearls of wisdom I gathered from my hour-long conversation with the monks:

Does our ambition disconnect us from living in the moment?

After brief pleasantries with the four monks, I delved right in. As someone who often struggles with the fire of ambition within, I was relieved to hear the answer.

According to the monks, our ambition keeps us on our path, pushing us towards our goals. But the key is to not let those ambitions consume us. How? Don’t make yourself or other people miserable in the process. Detach yourself from the end goal, and focus on the happiness that the journey gives you. It’s okay if you don’t achieve something in this lifetime.

Many Buddhist monks and nuns for instance, aspire to attain the roles of scholars, and ultimately enlightenment. But the only way to inch forward towards those life-consuming goals is to not become obsessed with them.

A contemplative monk at a Buddhist retreat in Chiang Mai.

How do I accept circumstances I can’t control? (my biggest takeaway from the Monk Chat Chiang Mai)

One word – gratitude. We need to dwell on the good things in our past and present, and be thankful for them. When we realise how much we have to be thankful for, circumstances beyond our control become easier to accept.

Speaking of his own life, one monk shared how he often fretted in his late teenage years about getting married, finding a good wife and raising his children. But after he followed his parents’ will and began studying Buddhism, he had a change of heart. Everyday, he began to dwell on the things he was grateful for and the more he did that, the less he fretted about the future.

What is your biggest fear?

As we spoke about living more in the present and dwelling less on the future, I wondered what about the future he feared, if anything.

Loss of people close to him, he confessed, perhaps like the rest of us. Such sentiments transcend philosophy, religion, language and borders, and make us all human.

Worshippers at a giant Buddha statue in Chiang Mai.

How can I begin the journey of finding my purpose on earth?

If you’ve been reading my blog (and especially my rants) for a while, you probably know I’m often plagued by existential questions about my nomadic journey’s purpose. So this was a pertinent question… and deep within, I think I already knew the answer.

Many Buddhists believe that our purpose on earth is to alleviate the suffering of others. Monks aspire to this through their teachings and prayers, but as regular people, you and I can do our little bit too.

How? Be respectful towards the people we interact with daily – the house help, security guards, drivers, cleaners, servers; it’s just a twist of fate that they have much less privileged lives than us. Contribute to organisations that you believe are truly making a difference – either with your money, or with your time and skills.

What about the suffering of animals? Do you believe in veganism?

The devout vegan I’m turning into, I had to ask 😉

But like most Buddhist monasteries and nunneries I’ve spent time visiting, the answer remained the same (and to me, unconvincing). Since monks rely on other people for donations, they accept everything given to them.

Unconvincing, because in most rural parts of the world, meat is more expensive to buy – and comes at the cost and suffering of an animal. History books have said that Buddha introduced the concept of vegetarianism in India, but it appears that his message was somehow lost in Buddhism’s spread to other parts of Asia.

Also read: Why I Turned Vegan – and What it Means For My Travel Lifestyle

Hiking in Chiang Mai leads to places like this <3

Is it fate or free will that controls our life?

A heavy question, but I found the answer to be a near epiphany!

As per Buddhist teachings, how we’ve lived our lives upto today create our present and future circumstances. So our current choices determine our future fate.

Even though I’m acquainted with the concept of karma through Hinduism, I always felt it a bit off that our deeds in our past life, of which there is no scientific proof yet, determine our circumstances in our current life. But even if we assume that we are put on earth and into our current circumstances by fate, I would like to believe that we can mould our future by our present actions and thoughts.

Also see: In Photos: The Countryside of Northern Thailand

There are so many ugly things happening around the world. Should I feel guilty about having a good life?

This question was sort of lost in translation. But from what I gathered, it helps to detach ourselves from both the good and the ugly things, and focus on ways we can make a difference.

Entrance to an old Buddhist temple in Chiang Mai.

Why are we scared of death?

Every time I hear about the death of someone young, who only lived half a life, I think of my own mortality and it scares me. So I decided to question why.

The monks suggest that we are familiar with life; we think about it all the time and we know what to expect, so we do not fear it. But death is unfamiliar. We drive away thoughts of it, we discourage discussions about it. And the idea of anything unfamiliar is scary.

We need to begin training our minds about death by dwelling upon it everyday. We can think of it as the beginning of another life, not the end of this one. Or we can think of it as a great mystery. But as long we keep thinking about it, we’ll find it easier to accept when it knocks on our door.

What are your burning questions about life, death and detachment? What would you ask at the Monk Chat Chiang Mai?

Where to Find Droolworthy Vegan Food in Chiang Mai

Where to Stay in Thailand: Unique Lodges, Boutique Hotels and B&Bs Beyond the Beaten Path.