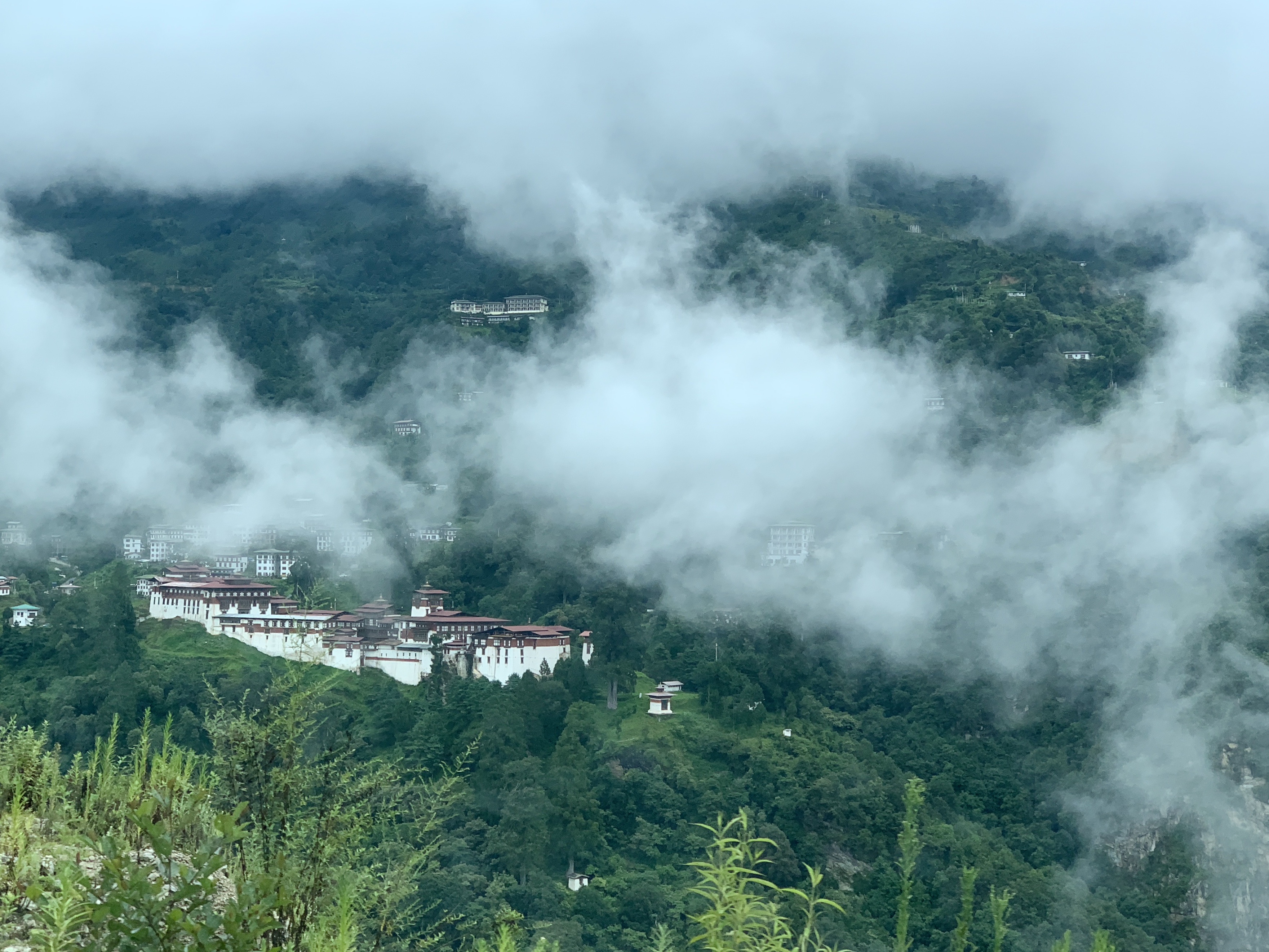 The Bhutan happiness index has intrigued me for a long time. So I tried to figure out what happiness means to its people.

Is this indescribable feeling happiness? I wondered as my partner and I hiked through the blue pine forests of Bhutan’s Haa Valley. Up gentle hills we walked, alive with the scent of rain from the night before. Prayer flags fluttered in the wind. White and pink wildflowers dotted the landscape.

I had landed up in Bhutan last autumn to speak about my book at the Mountain Echoes Literary Festival. And found myself immediately drawn to the old world charm, neighbourhood forests, mountains, traditional architecture, people, food and slow life of the capital city Thimphu.

Perhaps like everyone else, I’ve been intrigued and fascinated by the idea of Bhutan’s Gross National Happiness. Is Bhutan really the happiest country in the world, I found myself wondering. Will I be able to glean the secret to happiness while I’m there?

Over nearly a month of traversing the magical beauty of Bhutan, I ended up meeting local writers, entrepreneurs, travellers, farmers, thinkers and dreamers. Some were fleeting encounters, some easy friendships. To some, I couldn’t help but pose the question, what is happiness anyway?

As we stay home and introspect life during this global lockdown, I’m finding solace in their answers:

I was in complete awe of Sonam Pelden – a Forbes 30 under 30 tech entrepreneur – as she spoke about Bhutan’s evolving digital landscape at Mountain Echoes. I felt her enthusiasm for the digital world back when I worked in Singapore, but perhaps I’ve lost some of it to cynicism along the way.

Chatting with her though, I first learnt how Bhutan actually calculates its Gross National Happiness Index (GNH). Unlike popular perception, the GNH is not a literal measure of happiness or even emotional contentment. It assesses changes in 33 indicators through surveys with randomly selected households. Parameters include psychological well-being, education, health, governance, ecological resilience and standard of living. This ultimately gives a glimpse of whether people are moving from the “unhappy” end of the spectrum towards the “deeply happy” end. But more than that, it helps create a development road-map targeting low-performing parameters.

Sonam says candidly, “The narrative put forth by popular media propagates the notion of a naïve blissful nation – albeit enticing – where tribes of smiling people are constantly gripped in song and dance. This is a dangerous half-fiction which needs to be fought on all fronts. It incubates anti-intellectualism and a sense of entitlement, and perhaps even more troublesomely, manages to distort how Bhutanese people perceive themselves. There is so much more than smiling and dancing to Gross National Happiness – and we need to push that forward!”

Personally for her, “the pursuit of happiness means the pursuit of usefulness. Ultimately being useful and having a purpose in life – i.e adding value to my community and to myself makes me feel more fulfilled, more alive – all the things we associate happiness with.”

On the other hand, “being happy implies permanence – it implies you have completed all your prerequisites and now you get to sit atop your giant pile of happy forever. You have retired from the everyday roller coaster of emotions to simply revel in your happiness.

And this is why I have a problem with Bhutan being dubbed as the happiest place on earth.”

Happiness is a mindset

“I’m too smart to be sitting at home,” Tashi said, only half joking. She aced her studies, but life had different plans for her. Back in the early 90s, much like in India, women in Bhutan were expected to marry early, as per the wishes of their parents.

But that didn’t stop her from becoming an entrepreneur. She refurbished her 80-year-old house in the remote Ura village of Bumthang Valley and opened it up to travellers seeking a taste of rural life. That’s how we met.

As a passionate and forward-thinking farmer, she was chosen among a handful to travel to Austria and learn from organic farmers across the country! When she returned, they even helped her build a stone oven to practice bread making – the only one of its kind in all of Bhutan.

In her cosy kitchen, we gathered one night to drink homemade ara – a fermented (and potent) local rice brew. Chatting about life in Bumthang and her adventures in Austria, I couldn’t help but wonder what she made of happiness.

“To me, happiness is something we set our minds to. No matter how hard life gets, it is about being able to take it easy, think in positive ways, and just feel satisfied with what we have,” she explained.

Indeed, it’s easy to complain about the cards we’ve been dealt by life. But perhaps the only way to pursue happiness is to choose how we play the hand.

Happiness is seeking inspiration on the road

At the Mountain Echoes festival, I was delighted to share the stage with Tshering Denkar – Bhutan’s first solo female traveller and travel blogger. Her passion to get off the beaten track in Bhutan, hitchhike to remote parts of the country, connect with indigenous communities and bring their stories to the world is infectious.

We ended up hiking in the forests of Thimphu together. And that’s when I learnt that she was invited to meet His Majesty The Fifth King of Bhutan after he read her blog! He commended her for her fearless travels and curiosity about her own land. Indeed, her blog inspired us to travel all the way to Haa Valley. And her stories of the remote eastern corners of Bhutan make me long to return to the country.

As a fellow traveller, I think I get it. Being on the road often makes me feel close to the illusive, inexplicable feeling of happiness.

Also read: Meet the Courageous Indian Woman Who Travels the World Solo – On a Wheelchair!

Happiness is an inside job

As a vegan traveller, I was amazed to learn that Bhutan has no slaughterhouses! Consciously harming sentient beings is considered out of line with the Buddhist principle of compassion. Ironically though, Bhutan imports meat from India…

The quest to understand Bhutan’s complex relationship with animals led me to Yangso. The pioneer of Bhutan’s small but passionate vegan movement and founder of the country’s first vegan club. Through her, I discovered vegan-friendly local brands and connected with other Bhutanese vegans. We ended up hosting a meetup in Thimphu and swapped stories of vegan, eco-friendly and minimalist living. Her passionate advocacy for animal rights in a country whose national dish is ema datshi (cheese and chillies), left me inspired. So I had to ask Yangso what happiness meant to her.

“Happiness to me is an inside job. I maybe in the most peaceful and happiest country in the world, but to me happiness is a state of mind. It is embracing the present moment. It is acceptance. It is patience. It is knowing that my existence matters,” she said.

That inside job is not always easy. But I know for a fact that to the billions of animals suffering out there, her existence matters. And hopefully, her patience will pay off.

Also read: On Life and Contentment: A Conversation With Buddhist Monks in Thailand

Happiness is giving back

At the end of our panel, Denkar, Pem C (the founder of Bhutan’s first lifestyle magazine) and I had the great honour of being invited to chat with Her Majesty the Royal Queen Mother Ashi Dorji Wangmo Wangchuck. I would only later learn how rare that honour was!

For someone who inspires so much awe and respect among the Bhutanese, I was surprised to hear her open up about her youthful adventures before she embarked on a different journey as one of the Queens to the visionary Fourth King of Bhutan. I didn’t get the opportunity to ask her about happiness, but her eyes lit up as she spoke about her foundation, Tarayana.

She travelled across Bhutan, to far-flung villages, trying to grasp the challenges of rural living. And set up the Tarayana Foundation to support sustainable development and vocational livelihoods on the remote countryside. Green technologies are at the core of these projects – including micro hydro power projects in off-grid villages, bio sand water filtration, dry composting toilets and solar dryers for food preservation.

It sounds to me like happiness might just be about making a difference in the lives of those less privileged than us, in whatever way we can.

What do you think of the Bhutan happiness index? What does happiness mean to you?