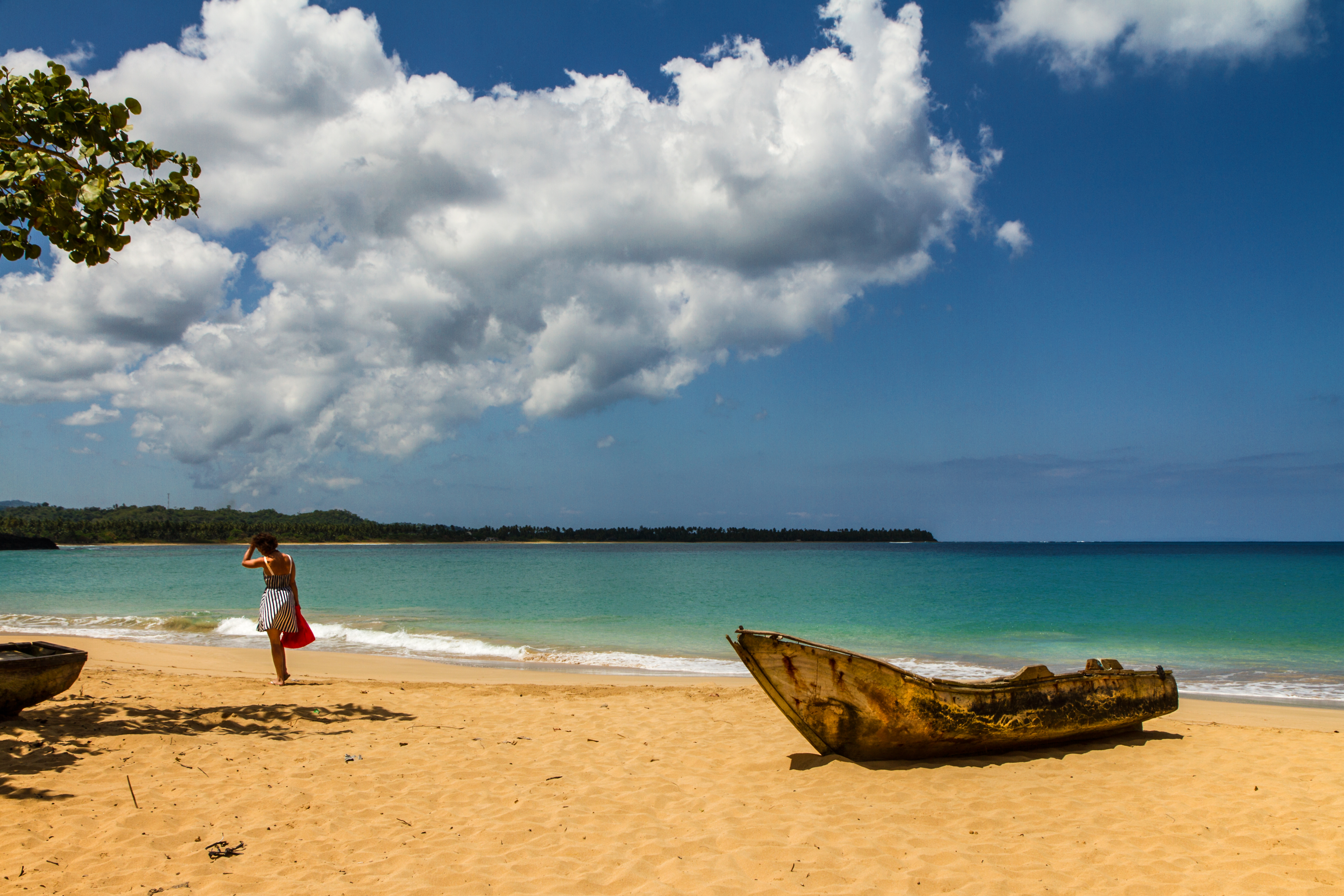 Porque viajas sola? Why do you travel alone?

Some questions don’t change even on the other side of the globe.

I was sitting in a cave under a waterfall, beer in hand, in the Dominican Republic – a Caribbean nation that hadn’t been on my radar until I found a cheap flight and two unplanned weeks in New York.

I was sitting in a cave under a waterfall, beer in hand, with Juanin, a newfound friend who had quit his job in a golf resort to become an independent guide – leading curious travellers to secret waterfalls and pristine villages near the north coast, one of which he grew up in.

I wanted to tell Juanin that I travel alone because if I didn’t, I probably wouldn’t be sitting with him in a cave under a waterfall, beer in hand, chatting like long lost friends.

The dreamy blues of the Dominican Republic.

Even for an introvert like me, solo travel lends itself to unexpected friendships all the time. And so it was in the Dominican Republic:

Una vida: You have one life.

When the folks at my sweet abode in Tubagua introduced me to a local guide, I told him I wanted to do what the locals did for fun. So we rode his motorbike on bumpy roads, through vast meadows and sleepy villages, stopped at a small shop to pick up beer, and parked the bike in the backyard of a family that earns its livelihood making yoghurt and cheese – politely declining their invite to stay for lunch. We hiked to the end of the village, to find pristine waterfalls and three natural swimming pools all to ourselves.

By the water, we sat for hours, drinking beer, warming up after jumping several times into the pools from different cliffs – talking about everything from our personal choices to stay independent and do work we truly love, to the Dominican Republic’s complex relationship with Haiti, to its secret nightlife where young women seem to enjoy making a quick buck from keeping older expats company.

Juanin suggested heading back into the water and waded in with our beers, into a (secret) cave under the waterfall! That’s when the solo travel conversation happened, and we clinked our beers to one conclusion: Una vida – One life! Choose how you want to live it, and don’t judge others for their choices.

Also read: Get Busy Living or Get Busy Dying

Cheering to life with Juanin.

Sounds of the sea.

I clearly remember that sunny October afternoon. I was walking to a surf beach in the southern region of Barahona, when a young boy started following me. I was wary, held my bag close and hurried my pace. He continued closely behind, so finally I broke the tense air (in my head anyway) and asked him which way the beach was. He pointed to his mouth and ear, indicating he couldn’t speak or hear – and continued following me.

I wasn’t sure what was going on, so I decided to turn back and go to the beach another time. But seeing me turn, he pointed to the left curve ahead and insisted I go on.

We reached the beach, and I picked a spot to sit and watch fishermen make futile attempts with makeshift fishing rods. He spent a long time walking on the shore, as though searching for something. When he came back, he was holding a precious blue Larimar stone in his hand – found only here in the Dominican Republic! He gave it to me, and suggested that I should wear it around my neck…

I asked him to sit next to me and together we watched the waves crash against the shore. The crashing sounds wouldn’t let me think, but if they did, I’d ask the universe why it was so unkind as to not to let him hear its beauty.

Also read: What Seychelles’ Most Famous Musician Taught Me About Dreams

The world works in mysterious ways.

In the remote Valle Nuevo National Park in the heart of the Dominican Republic, I hiked down the mountain to its only village – El Castillo, home to 70 families. Locals here live off potato farming and jam making, and lead isolated but laid back lives among gorgeous mountain vistas – so much that no one seemed to notice (or be bothered by) my pointless wandering around.

Except one young lady, who responded to my smile with an invitation to join her and her daughters as they picked blackberries off the hillside. She invited me into her humble one-room house, where the pans were boiling with blackberry jam!

Much of our conversation was lost in translation, but I did gather that she sustained her family with a small jam-making business – which she bottled and sent off to the capital city, to be enjoyed by people who’s lives she didn’t have a clue about. With the kids looking hungry for lunch, I thanked her for her kindness and stepped out, but she came chasing behind with a bottle of hot blackberry jam – fresh out of the pots – pouring out Spanish instructions to let it cool before eating.

It’s never about how much money you have, it’s always about how big your heart is. Mine felt overwhelmed in that moment.

Also read: Fear of Missing Out

I travel because Google can’t capture the feeling of being welcomed into someone else’s world.

I made the long journey to the southwest region of the Dominican Republic, with dreams of exploring curious lakes, pristine beaches and a part of the country far off the tourist circuit. Only to realize that poor public transport connectivity and little tourist infrastructure meant sky high costs.

I related my woes to Nino, a part-time driver who came to fetch me to my home by the sea. Two days later, on his day off, he showed up in the morning with his motorbike – ready to drive me to Laguna de Ovideo, a gorgeous saltwater lake and the home of migratory flamingoes, 50 km away – at a very nominal cost. It was the first time he’d be venturing that far on his bike.

Flying through the wind, we rode along the dreamy blue coast, winding hills and meadows covered with windmills, to reach Oviedo. On a boat in the lake, we saw hundreds of flamingoes standing in the water, flying, catching fish! We heard that when the seasons change, they’ll make the long journey to Florida – no maps needed.

I want to be a bird in my next life, so I need no compass and no planes. But for this life, serendipitous bike rides will suffice.

Also read: You Can Shake The Sand From Your Shoes But Not From Your Soul

Have you made unexpected friends on your recent travels? Share your stories.

I’ll be sharing recommendations for unique eco lodges across the Caribbean soon. Subscribe to my monthly newsletter (or to individual posts on the top of the right column) so you don’t miss it.

PS: Big thank you to everyone who answered my first ever reader survey! The winners of the lucky draw are M.A.Razzaq Siddiqui and iamblackwildflower.