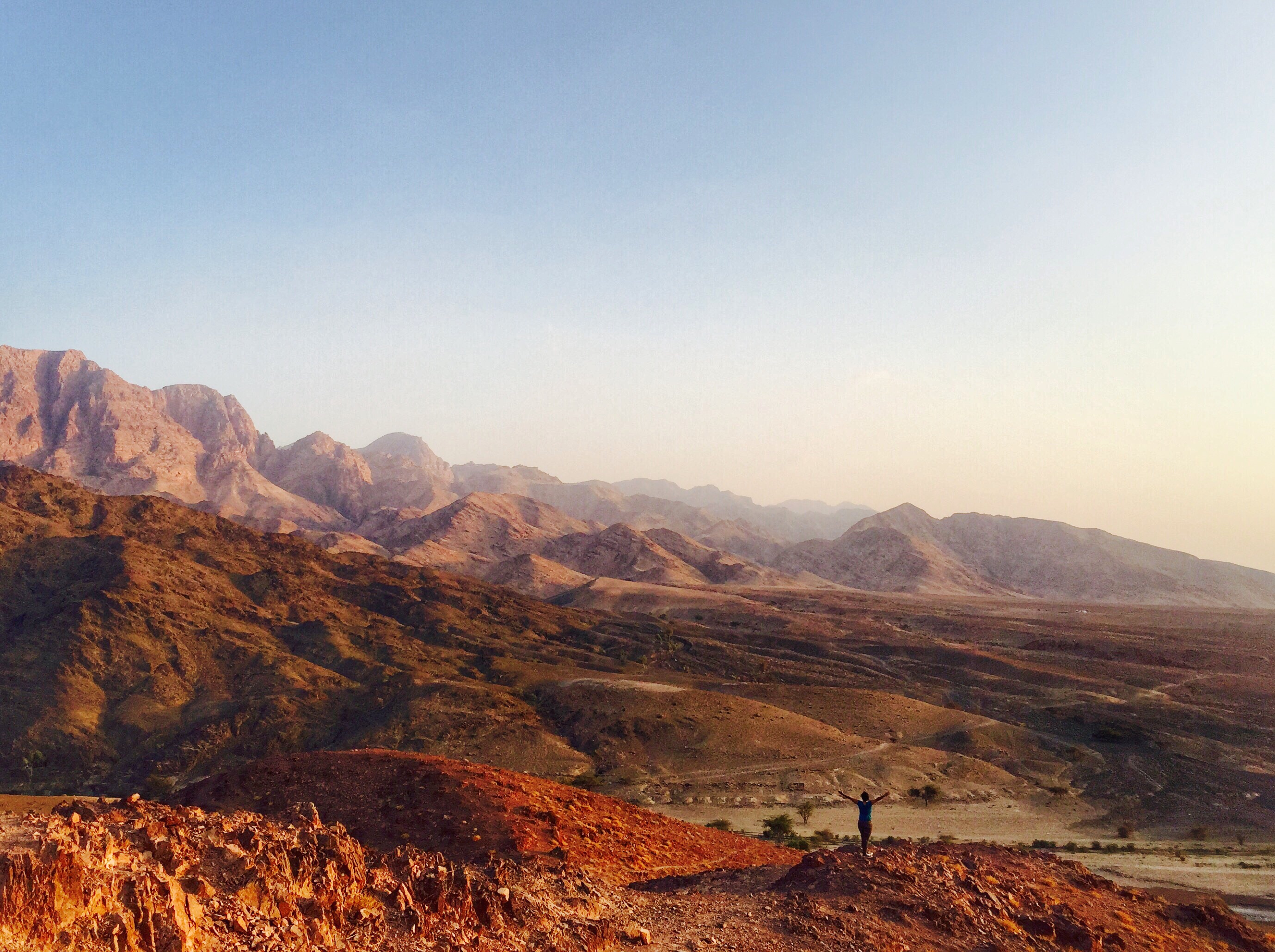 Under a million stars in the pitch-black sky and the occasional cry of the desert fox, I let the cool breeze lull me to sleep. Surrounding me are the stark, barren, make-your-eyes-sore mountains of Wadi Finan, and in the distance, a community of Bedouins have pitched their tents. The constellations above me are their compass, a half-dry stream their source of water, and nomadism the only way of life they know.

The stark mountains of Wadi Finan.

It took us four sweaty hours in the old car of our Jordanian friend from the mountains of Orjan, then a bumpy four-wheel drive to arrive here. We left the last traces of civilization behind when we turned off the Dead Sea highway that connects the country from north to south, and were left awestruck by the lonely desert landscapes that these nomads choose to call home.

Why would anyone choose to live here? That was the only thought swirling in my mind when we entered the earthy Feynan Ecolodge – an off-the-grid lodge managed and run entirely by the Bedouin people who live in this community.

Feynan Ecolodge, tucked away in the barren hills. Photo via Feynan.

That first evening, with the sun on our backs, we hiked up one of the mountains to watch it set below the horizon. Every few minutes, the mountains changed color as the angle of the sun dropped, and the almost dry riverbed glistened with their reflection. The mountains echoed with the sounds of kids playing and the hissing of kettles, ours included, for endless rounds of sweet tea – what the Bedouins cheekily call their alcohol! As the red ball of fire sank, the soulful cry of the Muezzin’s call to prayer rang out from the mosque. Everything felt surreal.

That first night, our Bedouin friends taught us how they track directions based on the constellations in the sky. With the position of Orion and Polaris, we found Mecca and the direction of prayer. The constellations that make up the sun signs in astronomy columns lay spread out above us! For hours, we watched the Milky Way and the endless sky with our naked eye, and spotted stars that were undergoing supernova – the death of an aging star with a bright explosion millions of years ago. The sky is the only roof we need, they told us, so I decided to ditch my cosy room and sleep a deep, dreamy sleep on the roof of the lodge.

Sleeping under the stars at Feynan Ecolodge.

In the silence of the hot days, we often caught a glimpse of a lone small truck surveying the area – a family returning with their belongings from another part of the desert, to set up their tents here for the season. Even though people live simply, with no electricity, scarce water and only seasonal access to local produce, some things about their remote and untouched way of life are changing. The government has set up a school in the desert, so many Bedouin families now choose to move locations only within a short distance of the school. A few cell phones have been bought for convenience (with a communal charging point at the mosque), jeans and t-shirts are used interchangeably with the traditional attire by the younger generation, and thanks to Feynan Ecolodge, employment other than herding cattle has been found. At the moving market that comes to the next town, everything from cattle to cell phones can be traded.

The mosque of Wadi Finan at sunset.

When we visit a Bedouin family in their airy tent, it feels like a sequence from Lawrence of Arabia. We sit in the large communal space reserved for guests, decked up with carpets and mattresses, and chat and drink endless rounds of tea. We watch mother and son knead dough on the ground, light a bonfire, and bake delicious Arbood bread in its ashes! We hear stories of how socializing still forms the core of life here – how guests can show up without any qualms, even in the middle of the night, how one must cough outside the tent before being invited in so as not to invade privacy, and how anyone can stay with the Bedouin hosts for three days without being asked their intention of visit. We learn that men in the older generations still have multiple wives and tens of children, but their sons profess to monogamy and fewer children. Unfortunately, women still can’t work alongside men – even at the ecolodge, where they are given employment in the form of candle and leather making – but I have no doubt that too shall change in the coming years.

With Suleiman and our new Bedouin friend at his home.

Tents pitched by the Bedouin people in Wadi Finan.

A Bedouin lady bakes bread in the ashes of a fire.

We spend our days hiking in the desert, feeling immense joy at the rare sight of a fluttering bird, letting unexpected streams of water cool our heels, marveling at rocks shaped over centuries of wind erosion, following shepherds with their scores of cattle. On a particularly hot and treacherous hike through Wadi Ghwayr, we wade through multiple streams without spotting a man or animal for hours, but end up at the most gorgeous waterfall within a canyon! Turns out, our joy is not much different from that of the first Bedouin man who decided to call this place home decades ago – legend has it that he ran in exhilaration whenever he spotted a man or bird or any living thing in the mountains.

Cooling off in a canyon at Wadi Ghuweir!

Sunset in the desert.

In discovering joy in the smallest things we take for granted, in magnificent sunsets and magical nights, in a world that revolves around tea and conversation, in a life where nothing is constant and every material possession tradable… how could I ever ask why here?

Practical info: Feynan Ecolodge is a community-run, solar-powered lodge in the stark desert of Wadi Finan (2-3 hours drive from Amman), and perhaps the closest you can get to real Bedouin culture in Jordan. I highly recommend visiting a Bedouin family for closer interaction and learning their art of bread or coffee making, hiking to Wadi Ghwayr, and sleeping on the rooftop under the stars.

What are your impressions of Bedouin life in Jordan? Have you met nomadic people on your travels?