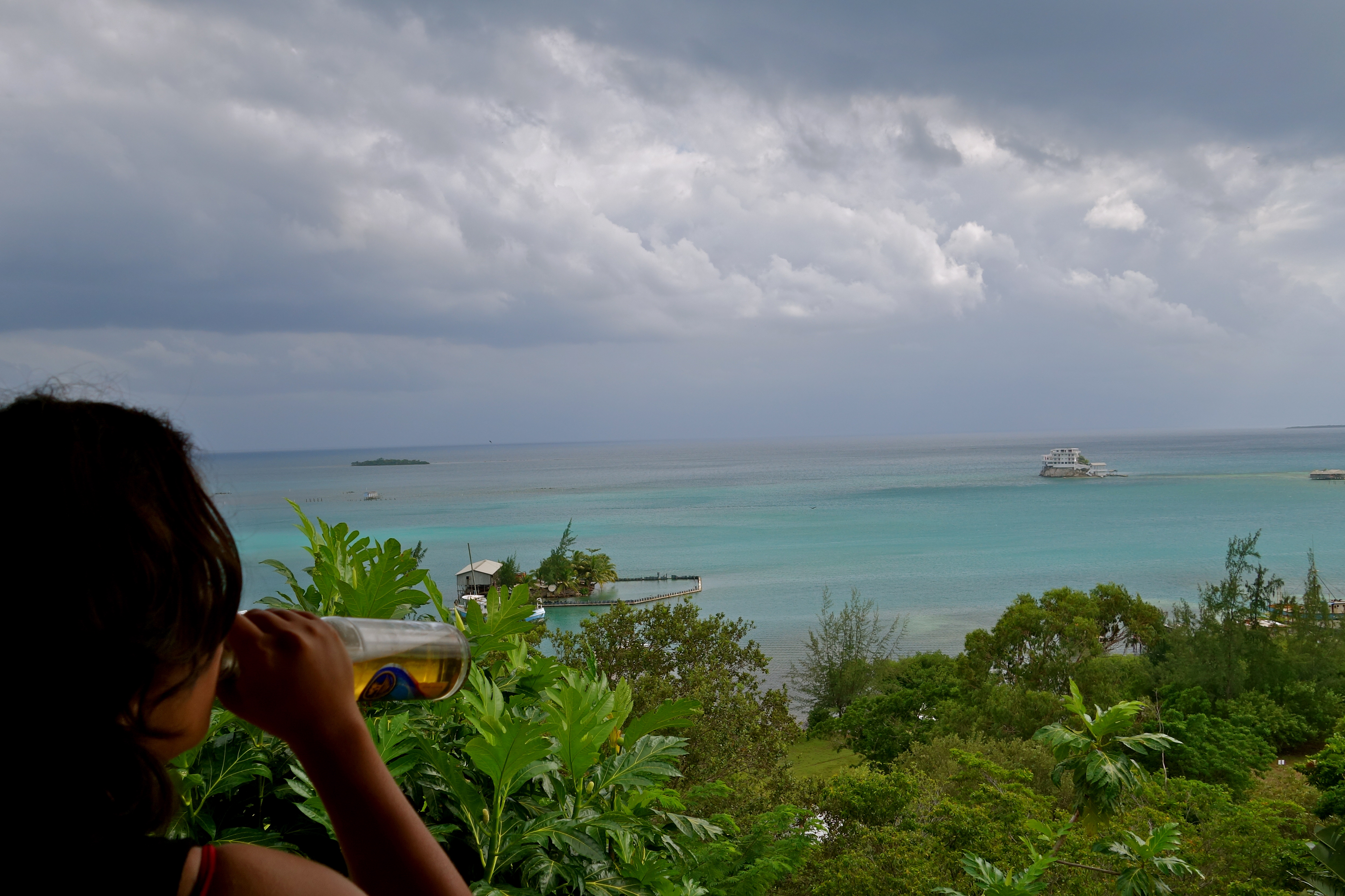 I had to pinch myself as my tiny 20-seater plane with an open cockpit, circled a lush mountainous island surrounded by the deep blue Atlantic Ocean. It looked a little like Isla Sonora from the Jurassic Park movies. The plane descended sharply as the hillocks parted to reveal a tiny airstrip, which ended just a few feet away from the ocean. The airport was only connected to the rest of the island by boat.

Oral, like the toothbrush – our host at La Giralda introduced himself and led us to his boat. His face was tanned from years in the sun, body muscular from years of rowing, demeanour laid back from his island upbringing.

A rainbow welcomes us to Guanaja. Notice the pilot deplaning the kids!

That there were no streets on the island we knew, but that the capital town of Guanaja was built on stilts on the water, we didn’t. Called Bonacca, it was originally two islands, connected by a boardwalk that was gradually (manually) filled with rocks and sands to expand the town. From a distance, we could see people rowing their fishing boats in its bylanes. The Venice of the Caribbean?

Read: Honduras: We Travel to Realize Everyone is Wrong About Other Countries

The town of Bonacca, built on stilts!

The by-lanes of Bonacca town.

Along a tranquil bay in the ocean, we arrived at La Giralda. It was once the home of a Caribbean family – and what a home it was. A beach villa, aesthetically built with local pinewood, an infinity pool and the infinite Atlantic Ocean in its front yard! Four more villas, each with its own quirks, were built far apart, to host world-weary travellers like us who wanted to experience what might be the Caribbean’s best kept secret.

Over coconut rum, Oral regaled us with stories of island living. Word got around so fast among this closely-knit island community that if we started walking from one end of Bonacca, people on the other end would already know us before we got there. Hurricane Mitch hit the island for 3 long days in 1998, and the locals all gathered in a few homes and drank, because being content was the only way to die. In the end, no one died, even though the entire forest, the two major hotels, most houses and schools, and tourism on the island (it was once a secret haunt for Hollywood celebrities) were totally destroyed. Every islander had a Mitch story; Oral himself had held on to a tree on the leeward side of the mountain for an entire day so as not to be swept away by the growling wind.

Even now, amid the pristine beauty and slow-paced island life, a shipwreck here and a bare slope there, were stark reminders of nature’s fury all those years ago. Life on the island was split in two parts – before Mitch and after Mitch.

The little red dot on the left of the hill is La Giralda. In front, a wreckage from Hurricane Mitch.

Our Villa Almirante at La Giralda.

Swimming in the infinity pool at La Giralda.

For five days, we woke up to humming birds fluttering in the balcony of our Villa Almirante, attempting to count the shades of blue in the ocean beyond.

With Oral, we snorkeled off Michael’s Rock into the world’s second biggest coral reef, spotting octopus, lion-fish and a mind boggling variety of colors in the underwater world. Kayaking and Standup Paddle boarding in the stormy ocean, we felt like sailors out to explore uninhabited islands.

Oral chilling with a beer near Michael’s Rock.

SUPing in the Atlantic Ocean!

Across the coast from La Giralda, we met a small German community who had made the island their home. The first of them had arrived in the early 90s and inexplicably decided to stay. The others had followed. Far away from civilization, we sat drinking German beer, eating spatzle, and listening to The Scorpions!

By the time we hit the local bar at Bonacca, our faces were tanned from the sun and muscles sore from kayaking. Guzzling beer, I wondered what if I burnt my return ticket, bought a little piece of land, and never left this paradise; would the islanders accept me as one of their own?

Just then, more beers arrived on our table instead of the bill we had asked for – the locals on the next table had bought us drinks and sent us an invitation for a party! Just like that, I had my answer.

The local bar in Bonacca.

A taste of Caribbean living.

On which island have you left behind a part of you?

Note: I was hosted by La Giralda in Guanaja. It was impossible not to fall in love!

A Song from Seychelles

God’s Own “Island” by the Backwaters of Kerala