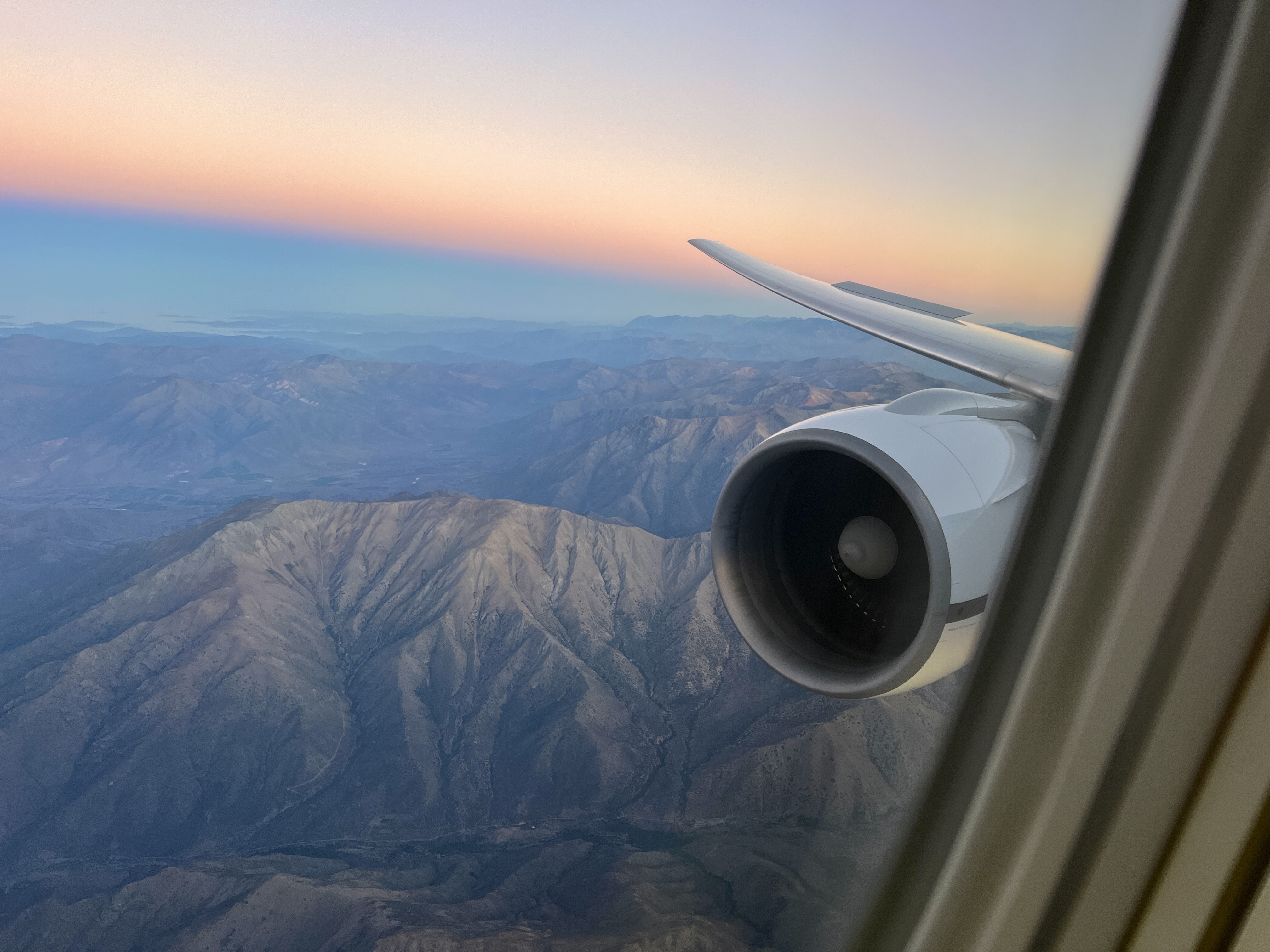 I groggily opened my eyes after 8 straight hours of sleep, confused about my whereabouts. As I shifted in my seat and unintentionally touched a button, the screen in front of me turned on. A tiny plane charted its course across an animated globe, slowly zooming into South America, settling just a little north of Antarctica in Chile!

In a few minutes, the first rays of sunlight penetrated the darkness outside my window, revealing layers of dramatic, snow-dusted, desolate mountains – possibly the Andes of the Atacama Desert. As we began our descent, a sea of clouds hung below us, with stunning glimpses of lakes and hills bathed in the pink hues of sunrise.

As we touched down, it suddenly hit me that I was really on my way to one of the world’s remotest islands – Isla Robinson Crusoe (originally called Mas a Tierra – “Closer to earth”), 700 kilometers off the coast of Chile, home to only 800+ people!

When Lenovo first reached out to me via The Better India about their #WorkforHumankind project, I never imagined I’d really be on my way to Chile a couple of months later.

As part of the project, Lenovo has set up a smart technology hub to offer (relatively) fast internet access to the otherwise isolated island community. The technology would simultaneously support Island Conservation‘s work to protect endangered species on the island.

I furiously googled the island but found little about it online. All I know is that in the 1700s, it was home to a stranded sailor whose life is believed to have inspired the Robinson Crusoe novel.

Once shortlisted for the role, I had to undergo a psychometric test and interview to see if I could handle living on an island so remote!

And finally here I am, typing this while in quarantine in Valparaiso, just half an hour from where the Chilean poet Pablo Neruda once lived.

Also read: What I Learnt Volunteering on a Remote Island in Cuba

Travelling internationally during a pandemic

If I’m completely honest, the idea of travelling alone to the other side of the globe after such a long hiatus was nerve-racking.

While navigating the world on an Indian passport has always been challenging, doing so during a pandemic, with vague travel and vaccine restrictions, was next level crazy!

And in the midst of a climate crisis, I constantly questioned whether it was worth the emissions of such a long journey.

I was given the option of a few different airlines flying via Europe to Santiago, but my choice of KLM was easy. I not only love their flying experience but also appreciate that they remain one of the most sustainability-minded airlines in the skies.

Since I last flew with them in 2019, they’ve continued to remain in the top 3 on the Dow Jones Airlines Sustainability Index. All their flights out of Amsterdam, including mine, now use a small percentage of Sustainable Aviation Fuel (SAF), which is hopefully the future of all aviation.

As per my Climate Action Plan (more on that soon), I’ll be calculating and offsetting emissions for all flights I choose to take this year, especially this long one to Chile. Lenovo also has plans to offset the overall environmental impact of our project.

Oh, and I was pleasantly surprised to find a bamboo toothbrush in my in-flight amenities kit – probably a first for an international airline! There’s still a way to go to reduce single-use plastic on board, but I have a feeling they’ll be among the first to get close to zero waste.

Also read: Shop at These Zero Waste Stores in India to Cut Your Plastic Footprint

Travelling to Chile on an Indian passport

Good news: Since 2019, Chile allows Indian passport holders with a valid US visa to enter the country visa-free. With my US visa, I breezed through immigration, stamped in for 90 days!

It’s mandatory to be vaccinated for Covid-19 with two doses (and after six months, a booster dose) to enter Chile.

Vaccines not taken in Chile must be validated, after which a Mobility Pass is issued for use across Chile. This can take upto 30 days. My Covishield (Oxford AstraZeneca) vaccine was validated in 3-4 days though.

My pre-departure RTPCR test – to be taken 72 hours before flying – was the stuff of nightmares! I had given my sample at the Metropolis lab in Goa before leaving for Mumbai, and 6 hours before departure, still didn’t receive my results. The lab guy eventually stopped answering my calls.

In panic, we made a mad dash to the international airport in Mumbai, where makeshift labs offer rapid antigen (results in 1-2 hours) and “rapid” RTPCR tests (results in upto 2 hours). I gave my samples for both, then heard from someone that only a few airlines accept these. What a shame it would be to miss the journey of a lifetime because of a delayed test result.

Ultimately, the Metropolis customer care connected me with someone in Panjim – a kind soul who was on her way out from work, but after some begging, decided to stay on and help me out. My sample had already been processed (negative) and only the report needed to be prepared. I received it 4 hours before flying; PHEW!

Lesson learnt: If flying internationally, do tests at two labs before departure, so atleast one arrives on time.

48 hours before flying to Chile, an affidavit must be filled with the results of the RTPCR test and a copy of the travel insurance.

The affidavit was the first thing to be checked when I landed at Chile airport.

Testing and quarantine on arrival

Although immigration at Chile airport was a breeze, it took almost two hours with long queues, health document checks and a (rather brutal) RTPCR test at the airport.

Official restrictions in Chile need incoming travellers to quarantine only until the results of the test, but our Work for Humankind team has to be in strict quarantine for almost 9 days – partly in Valparaiso, and partly on the island – and undergo constant testing. Which is fair since we’ll be travelling to such a remote island with only 800 odd people!

In some ways, this feels like I’m restarting my digital nomad life after a two year hiatus. Thanks to Lenovo, I’m now travelling with the super light and handy Lenovo Tab P11 Pro – which doubles as a tablet and laptop, and works with a finger, pen or keyboard! I haven’t used an Android phone in a long time, but I’m excited to try out the Motorola Edge 20 Pro – with 5x zoom and 30 hours battery life.

In other ways, it feels like a new era of travel – one in which I only accept assignments that can truly be transformative, not just for me but also for environmental conservation and the local community.

If all goes to plan – and the weather permits our small, low-flying plane to take off and embark on the turbulent 700km journey – I’ll arrive on Isla Robinson Crusoe over the weekend. Four more days in quarantine, then I promise to share glimpses of my island life here on the blog and on Instagram (especially stories!), as well as on Twitter and Facebook.

See you from the other side?

*Note: I’m travelling to Isla Robinson Crusoe in partnership with Lenovo and Island Conservation. Lucky me!

PS: I’m hiring! The Social Media Assistant position in my team is vacant again, and I’m looking for someone passionate about sustainability and social media to fill it.

If that’s you, see details here.

Turning 34 in Quarantine in the Middle of the Pacific Ocean