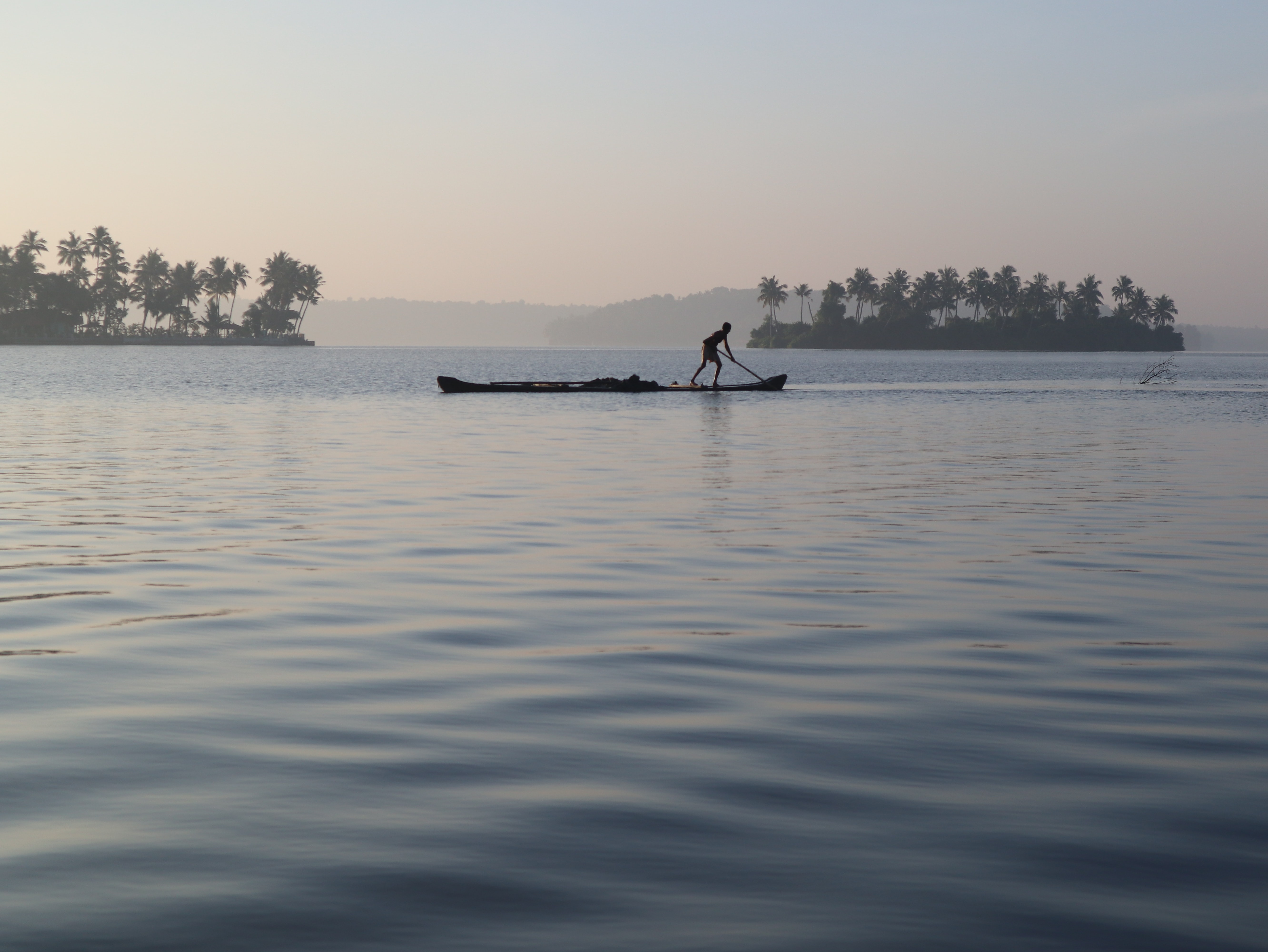 Away from the crowds of South Kerala, pristine moments and things to do in Kasaragod in North Kerala. Featured image: Marieke Weller (Unsplash).

I landed up in Kasaragod on my quest to discover Kerala beyond the beaten path. As I swam in the Kasaragod backwaters (they are that clean!), kayaked amid pristine mangroves and learnt how terribly skilled I am at rowing a round coracle boat, I quickly fell in love.

If you make your way to North Kerala – and you absolutely SHOULD – set aside a few days for some unique things to do in Kasaragod to re-establish your connection with nature:

Even though it was some eight years ago, on my first solo trip to Kerala, I still vividly remember that magical sunset. A boat maneuvered the pristine Kasaragod backwaters and deposited us on a sandy strip of land. On one side, the waves of the Arabian Sea roared. On the other, the backwaters gently flowed. We walked along, splashing in the waves, dipping our feet in the warm water.

And just as a the sun was about to sink below the horizon, we stood at what felt like the edge of the world. The Arabian Sea hugged the backwaters.

Turns out, the estuary on the Kasaragod backwaters is actually man-made. It was created by rice farmers who hoped to channel out the excess monsoon water from their fields into the Arabian Sea. But as nature would have it, the water level rose several times more during high tide, claiming the entirety of their paddies.

Also read: What India (and the World) Can Learn from Sustainable Tourism in Kerala

Mangroves are nature’s bridge between land forests and aquatic ecosystems. These trees and shrubs grow in salty terrain. They serve as breeding and feeding grounds for marine life, recycle nutrients and help prevent soil erosion. They tend to provide protection to coastal communities against cyclones and tsunamis. And are estimated to absorb more CO2 than most forests!

But most of all, they are some of earth’s most unique creations. With their roots above water, they’re a sight to behold and a paradise for birdwatching. As you kayak among the mangroves of Kasaragod, notice the beautifully meditative feeling of silently drifting along.

Unfortunately, 40% of mangrove forests on India’s west coast have fallen prey to urbanisation and shrimp farming. Something to dwell upon as you row.

Row a coracle boat under the moonlit sky

I’ll never get over my fascination with those round coracle boats. Traditionally made of interwoven bamboo, used by fishermen in southern India. They look easy enough to row, but each time I try my hand at one, I go round and round in circles!

And so it was on the Padanna backwaters of Kasaragod. Under a half moon and a fairly dark sky shimmering with stars, I rowed a coracle boat as little fish jumped around me, shining in the moonlight. What a feeling!

Also read: Offbeat Kerala: 11 Travel Experiences to Inspire the Artist in You

Catch a Theyyam performance in the land where it was born

Although the ancient storytelling artform of Theyyam can be witnessed across Kerala now, it was here that it began some 1000+ years ago (some say in the neolithic times!). Through extravagant face art, costumes and headgear coupled with awe-inspiring ritual dance, theyyam evokes the tribal spirits of the ancestors that once called this land home.

Every winter, the temples and some homes of Kasaragod come alive with the awe-inspiring Theyyam ritual. The practice is passed down from elders in each family – and many artists begin learning in their pre-teen days to perfect the act.

Swim in the Kasaragod backwaters

Sounds like no big deal. But the Kasaragod backwaters are perhaps the only ones in Kerala clean enough (and devoid of houseboats) for a refreshing dip. The sand below is soft and solitude is a given. Look up to see soaring eagles or keen kingfishers eyeing their prey. Hear the rustling of the palms. After all, it’s these little joys that live in on our travel memories.

Also read: What the Kumaoni Folk of Uttarakhand Taught Me About Life

Until I arrived at Oyster Opera, I only saw houseboats when I imagined Kerala’s backwaters. But this eco-friendly retreat, set up by the visionary Gul Mohamed, added a new dimension to the backwaters for me.

On this stunning island, surrounded by the breezy waters and swaying palms, local materials have been used to recreate traditional architecture with creature comforts. Think laterite stone huts, red tiled roofs, even a floating thatched hut. Feast your eyes and tastebuds on incredible local food – easily catered for vegan travellers. Then get ready for some hammock, swimming or beach bumming time!

Also read: Awe-Inspiring Uttarakhand Homestays to Tune Out of Life and Tune Into the Mountains

People often claim that North Kerala has some of the best beaches. Though the beaches in Kasaragod might not make my favorites, I wouldn’t pass up the chance to have high tea surrounded by palm trees. As the Arabian Sea gushes nearby and the backwaters serenade me.

Luckily, many of Kasaragod’s beaches are still deserted. Unknown to the beer-drinking, loud music-playing herds of tourists. Which is why I’ll refrain from naming them here. So when you land up on one, you can feel like a cast-away too!

Have you discovered any unique things to do in Kasaragod?

Moonlit Cycling, Poetry and Other Meaningful Things to do in Fort Kochi