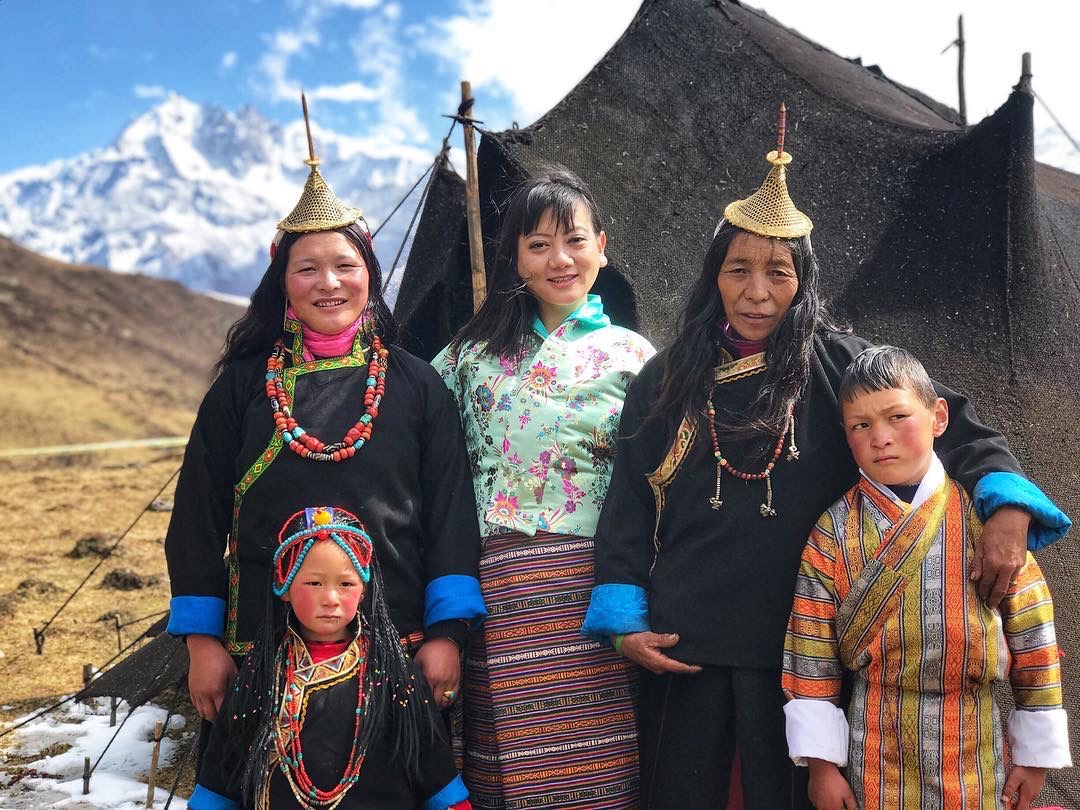 I was in awe of Tshering Denkar even before I met her.

I first read her travel blog – Denkar’s Getaway – after receiving an invitation to share the stage with her at the Mountain Echoes Literary Festival in Bhutan. She had spent the past couple of years travelling solo across the length and breath of her own country. Hiking, hitch-hiking and living with indigenous communities in remote mountain hamlets!

Travelling is never about the labels. But being Bhutan’s first solo female traveller and the first Bhutanese blogger in the travel space is a pretty big deal.

I mean, scan through global travel writing archives – or even articles about travelling in Bhutan – and tell me how many voices of intrepid female South Asian travellers can you find?

In Thimphu, I finally met Denkar – full of energy, excitement and humor – and despite being an introvert myself, we immediately connected through our mutual love for the road. Her travel stories eventually led us to Haa Valley and plans to explore the remote eastern provinces someday.

While hiking with Denkar in the mountains of Thimphu, I learnt how the King of Bhutan reads her travel blog and even invited her to meet him! He encouraged her to keep exploring the wonders of Bhutan, and inspire more Bhutanese people to explore their own country.

Also read: Inspiring Women I Met in Bhutan and What Happiness Means to Them

Prior to becoming a full time traveller, I was teaching in a prison in Thailand. One day, an inmate asked me, “Teacher, how is the world outside?” ~ Denkar

Denkar’s journey towards becoming a travel blogger and vlogger started in the most unlikely of places – a prison.

She travelled to Thailand to volunteer as an English teacher, and ended up staying longer to pursue further studies. While volunteering, she got the opportunity to teach at a prison in the Phitsanulok province in northern Thailand.

One day, an inmate asked her a question that would compel her to re-evaluate her life choices. How is the world outside? she wanted to know.

Denkar says she was haunted by that question, and slowly began to cherish the things she had always taken for granted. The freedom to be outdoors, explore, travel, meet new people and have interesting experiences.

She ended up backpacking across Southeast Asia, then decided to explore her own home country, Bhutan! For the past two years, she’s been travelling solo, living with locals across the many dzongkhags (districts) of Bhutan.

Also read: From panic to positive living: The pandemic in Bhutan by Denkar

Dance to your own music and let the world blend into your tune. ~ Denkar

She bade goodbye to apprehensive friends as she boarded a local bus to Phobjika valley – alone, with a one way ticket! She was on a tight budget, and had made up her mind to hitchhike and couch surf if she needed to.

As the bus winded along the gorgeous green mountains, she felt herself connecting with the wanderer within. She quickly made new friends, felt determined to chart her own path and ended up staying longer than planned.

And she hasn’t looked back since. Phobjika became the first of many, many solo travel adventures across Bhutan. Seeking refuge wherever she found it, connecting with locals and going deeper wherever she went.

My greatest achievement is that people understand what I do now! ~ Denkar

Like most South Asian parents, Denkar’s were worried about her financial well-being. The idea of spending hours behind a laptop at home or being paid to travel is still pretty alien in this part of the world.

Denkar’s father wanted her to work as a civil servant after she returned to Bhutan with a masters degree from Thailand. But she knew she wanted to do something different. She never saw herself fitting into a traditional work environment.

So she set out to prove that she could make a living from travel blogging / vlogging. She’d be the first of her kind in Bhutan!

And she did it. Her primary source of income is content writing. She also partners with like-minded brands on her travels.

She says her parents are now obsessed with her travel stories and offbeat adventures across the country!

Social stereotypes and hitchhiking in Bhutan

Denkar has hitchhiked to the remotest of villages in Bhutan on trucks and boleros! As in the rest of the world, hitch-hiking is considered a big NO for Bhutanese woman.

But when Denkar began fighting the social stereotype and putting her faith in strangers, she learnt that hitchhiking in Bhutan is safe as long as you keep your wits about you. She has hitched rides with mountain porters, truck drivers and students. Some bought her lunch. Some shared their deepest secrets with her. Many probably drew inspiration from her fearless ways.

Explore Panbang in one of Bhutan’s most remote districts​

Until a couple of decades ago, little was known about Panbang in Bhutan’s Zhemgang Dzongkhag, close to Manas National Park in India. Despite some recent development, the locals still live in thatched bamboo and grass roof houses, believe in shamans and drink tongba (fermented millet brew)!

Trek to Nuptsonapata in Haa Valley

Denkar says one of her all-time favorite treks in Bhutan was to Nuptsonapata in Haa Valley. Arduous though it was, it was filled with lush mountains, wildflowers, rare white poppies, an encounter with nomadic shepherds and an emerald lake!

Also read: 15 Responsible Travel Tips to Change the Way You Experience the World

Meeting the King of Bhutan as the first Bhutanese blogger / vlogger!

Besides being recognized as Bhutan’s first travel blogger, Denkar says being invited to meet the King of Bhutan in 2019 was her life’s greatest honor.

“We need to breathe Bhutan,” he told her. He spoke about the beauty of Bhutan and the need for Bhutanese people to explore more of their own country. Denkar says it was then that it really struck her. Her journey as a blogger could make a difference in the way her own people (along with those outside) saw Bhutan.

She pledged to the King that she would travel far and beyond to bring fascinating stories about Bhutan to the world.

Also read: “I Love Spiti”: A Campaign to Save Spiti Valley from Single-Use Plastic

Advice for women who want to follow their solo travel dreams

Denkar: “I believe if you travel solo far and long enough, you will meet your true self. My only advice is stop being a couch potato, wishing ‘if only’ your life was like that of someone you follow online.

If you feel you want to go out there and experience the world, do what it takes. Make the emotional commitment, carve your own path, get ready for some sacrifices and prove to yourself and those around you that you can do it.

Go be the author of your own story.”

How did you find the courage to take your first solo trip? Or what’s stopping you? Do you follow any Bhutanese blogger?

This post is part of my Solo Travellers Series – which aims to shed the spotlight on solo travellers from across Asia. Courageous souls who are challenging conventions in their own fierce ways yet typically underrepresented in the travel space.

If you’ve met inspiring solo travellers from Asia who I could consider featuring in this series, please connect us!

Other posts from the solo travel series

Meet the Courageous Indian Woman Travelling the World Solo – On a Wheelchair.

Meet the First Solo Female Traveller from the Maldives

Thanks to Tshering Denkar and Remya Padmadas for their inputs.