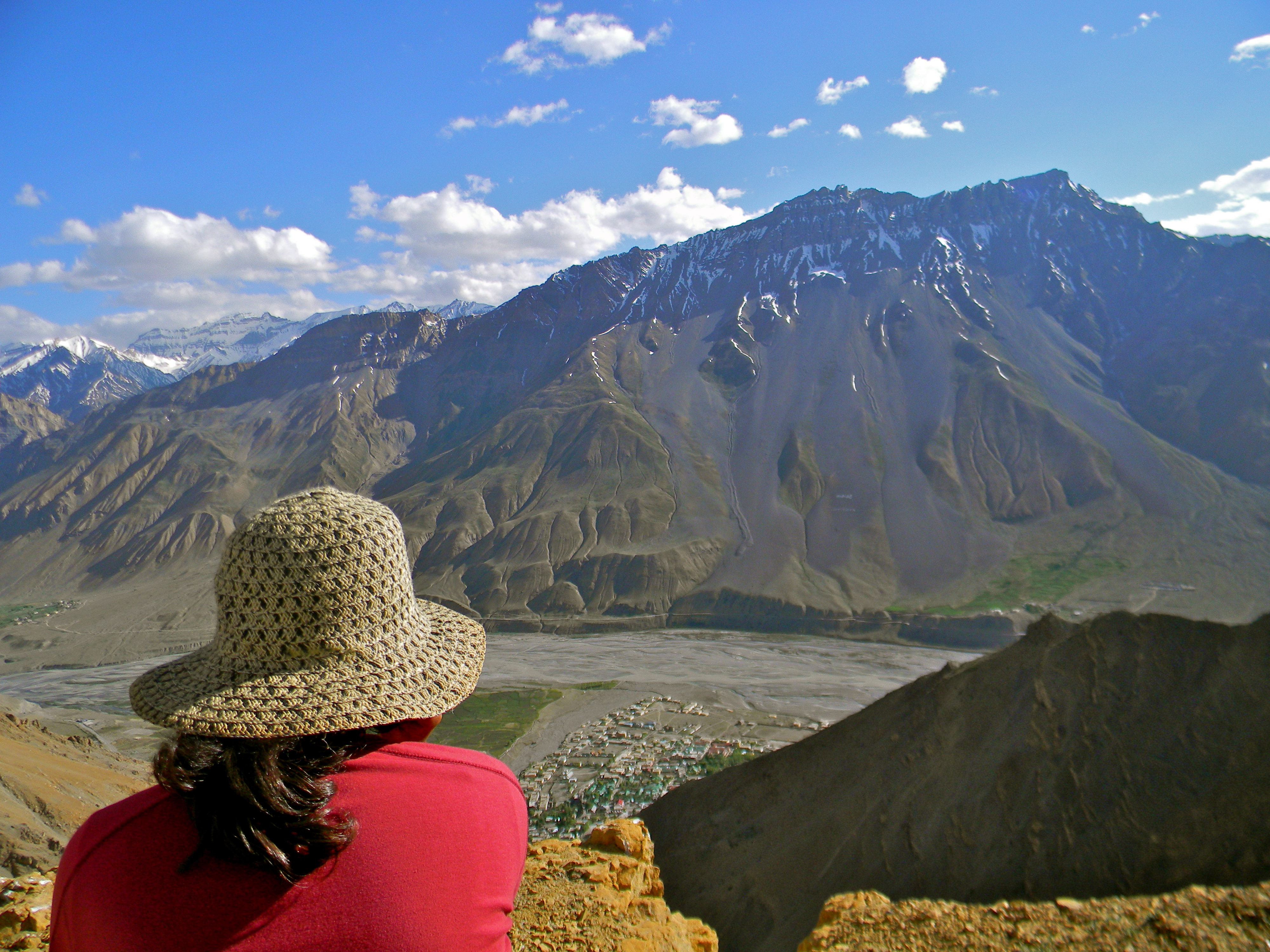 Climb with me to the mountains on the roof of the world. I’ll walk you by gushing rivers. I’ll show you curious summits staring starry skies. I’ll float you to the depths of ancient seas. I’ll take you to the world’s highest inhabited villages. I’ll enchant you with blue streams in deep gorges.

Won’t you come with me on a journey through Spiti, the most breathtaking valley in the north of India?

This is literally breath-taking. As an alternative to the long uphill walk from the village of Kibber to Chichum, the locals built an ingenious ropeway between two mountain peaks, over a deep gorge. The small open box on the pulley is used to transport men, cattle and raw materials, has no weight limits, and can’t be kind to your shoulders, though if you’re lucky, you’ll find someone on the other end to pull your ropes. The ropeway was built 5 years ago, and it has never yet collapsed.

This local engineering feat is worth a ride for the stunning views of the gorge below and the intimidating aura of the surrounding peaks.

The 1.5 hour uphill trek from Dhankar Monastery along the Spiti River to the Dhankar Lake, affords some gorgeous views of the village below and the monastery in the distance. Dhankar Lake is a picture of serenity, peace and calm, and could make anyone feel introspective. Expect a clear expanse of water dotted with fish-generated ripples, a backdrop of snow-capped mountains, and herds of yak or yaks-bred-with-cows.

It’s easy to rent a car or hitch-hike up to Key Monastery, but the real beauty is in hiking up from Key village, through the narrow, pebbly mountain path carved out by locals, and watching the monastery appear bit-by-bit, perched precariously atop a small hill.

You don’t have to be a bird-watcher or a biology-enthusiast to fall in love with the little village of Langhza. It’s easy to forget about civilization on its isolated slopes, and all you need to do is look up at the clear blue skies for thrilling glimpses of hawks, eagles and vultures. You could spot these elusive birds in other parts of Spiti too, but the landscape of Langhza ups that thrill by a few notches.

5. Highest inhabited village in the Himalayas.

Imagine living at an altitude of 4,513 metres, in a neighborhood of 13 households, and a 6-hour hike away from the nearest signs of civilization. That’s life for you at Komic, the highest inhabited village of the Himalayas, and perhaps the world. Its landscape will leave you in awe.

6. Full moon by the Spiti River.

Ebbs and flows, the Spiti River.

Ditch the bustling market of Kaza (Spiti’s capital), walk along the dry river bed that separates old Kaza from new Kaza, and make your way down to the Spiti River. You can feel its intensity only at its shore; mountain perspectives are such that from an altitude, water merely appears to trickle in the river. Sunset is not a specialty here, because the setting sun hides behind the mountains, leaving the sky a pink-red-orange color. A full moon at the shore, on the other hand, is bound to make your night and tease you with mountain shadows and water reflections. Concentrate on the sky, and you’ll see atleast a dozen shooting stars too.

Green is the happiest color sometimes.

Pin Valley is an oasis of green in the cold mountain desert region. After being surrounded by the brown bareness of the Himalayas in Spiti, Pin Valley is a breath of fresh air that you didn’t know you missed; think trees and waterfalls. And if you think Spitians are friendly, get ready to be blown away by the hospitality of the mountain folks living in Pin Valley. You’ll leave convinced that this was how we were intended to lead life on earth.

The new temple built for the mummy of Giu. Photo credit: Richard Weil.

Spiti is full of legends, and the mummy of Giu is perhaps the only one that you can testify to. It is said that during a drought in Tibet, several lamas were mummified. During the Chinese occupation of Tibet, most of these mummies were destroyed. However, in the earthquake of 1975, one of these mummies washed up in the Spiti River and was rescued by the Indian government. It was housed in Giu, where during a digging accident, a spade hit the mummy’s head and it started to bleed! You can still see hair growing on the mummy’s head, and spooky as it might sound, it is one of those things you have to see to believe.

10) Fukchung, a village of meditating nuns.

Meditation caves for nuns in Fukchung.

Spiti is known for some of the oldest monasteries and schools of Tibetan Buddhism. Fukchung village is a collection of stone caves, where nuns from the Nyingmapa school of Buddhism go for long-term retreats. They typically spend 3 years in a stone cave, meditating from morning to night, and not seeing or speaking to a human soul. It’s an intense experience, to walk along the caves, imagining the conviction of the nuns meditating inside them.

Which part of the Indian Himalayas do you love most?