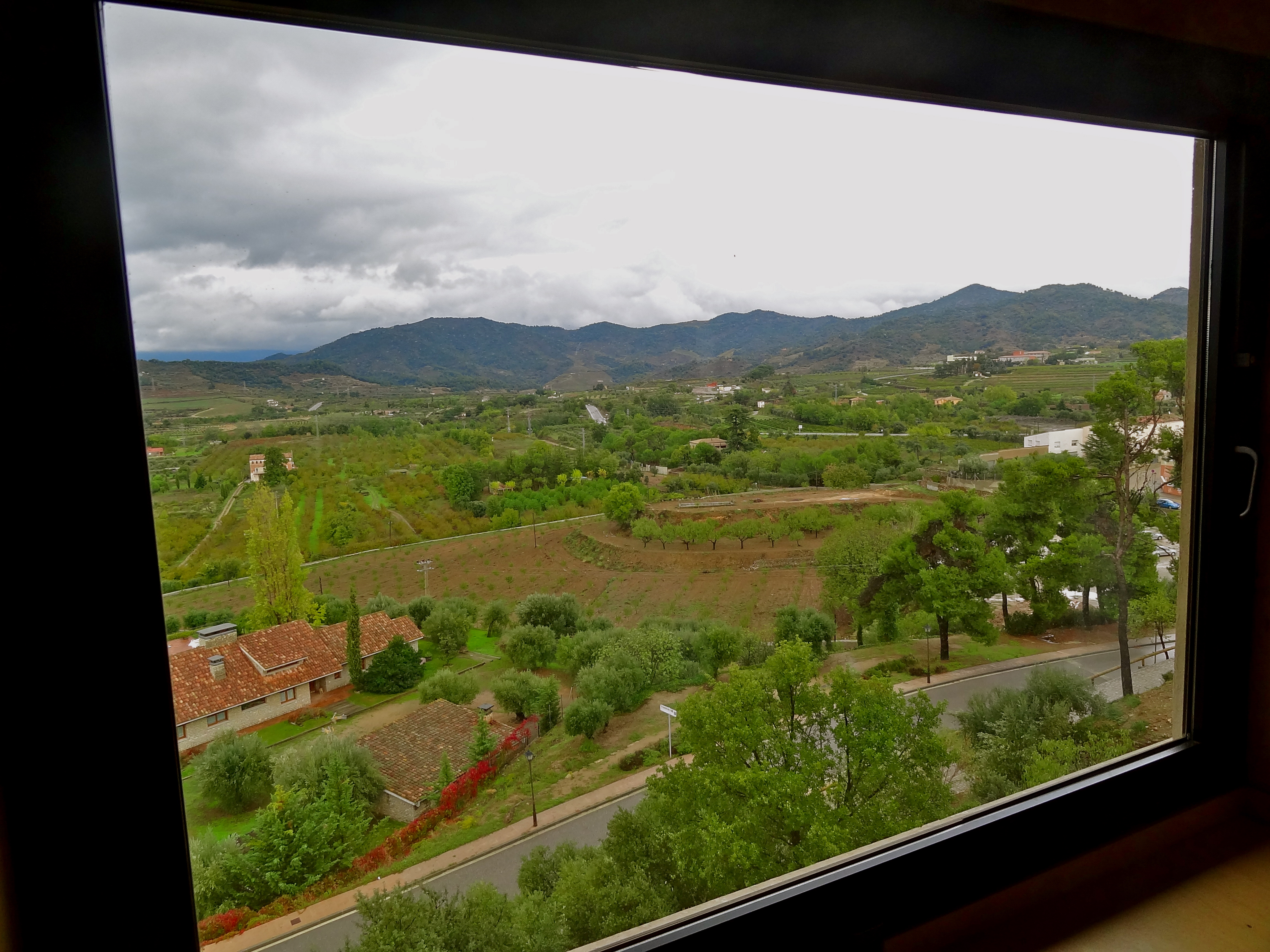 In vino veritas. In wine there is truth. And on the Spanish countryside, truth of a different kind; one that lays bare a love affair I never knew existed.

My romantic tryst with wine starts on a rainy morning, on the Cister route in the province of Tarragona, an hour’s drive from Barcelona. We drive alongside lush green valleys, partly covered in mist, as a bleak sun shines over the surrounding hills, promising to warm up an unexpectedly cold day. As the rain slows to a drizzle, we stop next to a stretch of carefully manicured vineyards and let the aroma of the grapes intoxicate us. We are in the premises of the Santa María de Poblet monastery, and as we’ll soon learn, these vineyards produce black wine, a darker version of red; there are hours to wait before we can try it.

Driving along the wine country of Spain

As we enter the Gothic aisles of this 12th century monastery, our guide Paco of Argos Tarragona (Twitter: @ArgosTarragona), instructs us in his usual light-hearted demeanor to not flash photographs if and when we come across the few monks who still live here; they are part of the monument, he tells us, but not monuments themselves. We traverse Spain’s medieval history, stopping by abandoned chapels, admiring the intricacy of its Romanesque architecture, and imagining life in its rustic walls up until the 1800s, when it was sacked during the war. We hear stories of the self-imposed hardship in which the monks lived, and marvel when Paco mentions that each monk was allowed 2 litres of black wine a day, to keep warm! They slept on straw beds, in rooms with glassless windows and no form of heating, through the harshest of winters. The wine kept them centrally heated, Paco says, which when I tweet, the Twitter folk lament being born in the wrong era!

Walking along the gothic aisles of the El Poblet monastery.

By noon, we land ourselves in Priorat, a sleepy small town on the Catalonian countryside, at the base of the Mont Sant mountain. In an 18th century restaurant called Hostal Sport (Twitter: @HostalSport), we are welcomed by Martha, the owner, who gives us a pictorial peek into the three generations of her family that gave travellers a taste of Priorat’s wine and olive oil, right here among these walls. She herself grew up on Priorat’s countryside, and went on to become the marketing head of Mango in Madrid, before the country roads led her back home. I’ll witness many such stories of wine-makers in Spain’s wine regions, stories that will make me look at wine as more than just a lifestyle – as life itself.

We sample the reds and whites grown and produced within the region, and as a wine novice, I judge them more by the taste and the ease with which they can be palleted, than by their aromas, acidity and texture; wine connoisseurs, please look away!

At the Falset Castle, which documents the history of Priorat’s wine regions, we watch films of wine-makers whose family-owned vineyards date back to over two thousand years. Their passionate love affair with wine stirs up feelings of nostalgia in me, as I reminisce of a time when farmers were as passionate about their produce as craftsmen are of their art. We hear how the region suffered during the economic crisis that has plagued most of Spain, which initially led to many wine-makers giving up on their wines, but gradually became the reason why Priorat has excelled as an agro-tourism destination. This is where city-weary travellers from Barcelona find recluse, amid the gorgeous countryside, the lush vineyards, and the wines of Priorat. Indeed, Mauricio Wiesenthal, a Spanish writer, said of this region,

When someone arrives in the Priorat region and gets lost on the country roads, inhaling the sharp aroma of the vineyards, they have the impression that nothing has changed for two thousand years in that remote Mediterranean land. They find bread, olives and wine; there is a magic stone everywhere.

After a long lunch and lots of wine ourselves, we find solace in an old brick-walled fireplace amid Martha’s vineyards, and a cup of hot chocolate comforts us in the backdrop of the incessant pitter-patter. Truth be told, the monks were right; no fireplace or hot chocolate can match the “central heating” of wine, especially wine born out of a two thousand year old love affair.

My trip to Tarragona, El Poblet and Priorat was in partnership with the Tourism Office of Spain, Turkish Airlines and the UNESCO World Heritage Cities of Spain.

Have you ever had an unexpected love affair on your travels?

See more of my pictures from Tarragona.

Read more stories on my month-long trip to Spain.