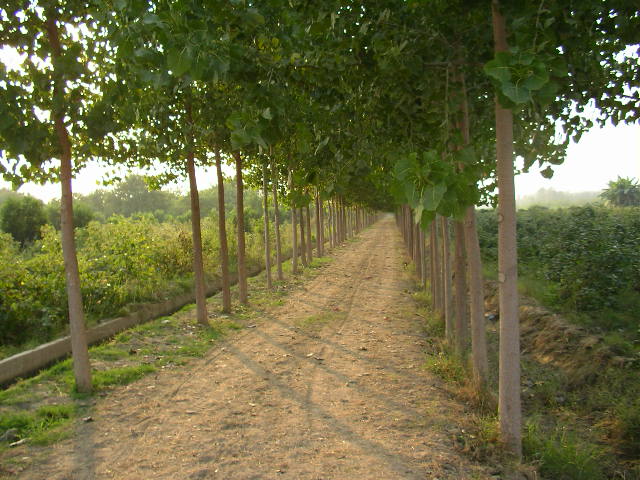 This article was originally published in The Hindu.

As a kid, I’ve often heard my grandmother talk about growing up in our native Punjab. I pictured little boys and girls running across big fields, plucking sour fruits and wild flowers, returning home at noon to the aroma of curries made with veggies fresh off the farm and paranthas laden with home-made white butter. I never imagined waking up to these images someday, given how they seemed only to be romanticized in the memories of people I knew.

In a desperate attempt to break the monotony of Delhi’s city life, we’ve impulsively decided to board a train to Abohar, a small town in Ferozepur district of Punjab, a town that Google could tell us almost nothing about. Eight hours and a short drive later, I’ve found myself in the midst of a 400-acre fruit farm. I now sit by a gurgling stream, watching the first rays of sunrise through the white, thin barks of Eucalyptus trees. I extend my hand towards what look like snowflakes dotted on dark green shrubs, only they don’t melt at my touch. I am in the most fertile cotton belt of the country and November happens to be the plucking season.

The smell of fresh earth mixed with oxygen-laden air reminds me of A.R. Rahman; this must be the aroma of our soil he refers to in his music. Just like in my grandmother’s stories, a whiff of freshly cooked aloo parathas and homemade butter floats in the air as we approach the farmhouse we are staying at. Our host Kishan, from the nearby pind (a village in the native Punjabi), ensures that we have a hearty breakfast. Heftily built with a thick Punjabi accent, he was a little intimidating at first, but breaking the ice came naturally to him. After greeting us at the Abohar train station, he immediately offered that we drive his jeep to the farm, which, for the sake of survival, our half-asleep selves politely declined!

As we busily devour the yummy parathas, Kishan rolls his long moustache and invites us to dinner at his own house in the pind. We’ve all heard stories of Punjabi hospitality, but to experience it first hand is different altogether.

We walk along a narrow clearing with tall Eucalyptus trees on either side, past ripening guavas, brown fields of Basmati rice, bitter gourds hiding away in their roped enclosures, water chestnuts growing out of mucky green ponds, and women in saris expertly plucking cotton off the shrubs. I am tempted by the half-ripe kinnows that glow with an orange-green tinge atop short trees. Kishan, as though reading my mind, plucks a few and tosses them towards me, only to smile as he sees me cringe at their tanginess.

That night, we make our way to Kishan’s house in the pind. I have been to villages in other parts of India, but Punjab is different. Kishan’s house might be very basic, but it is soothingly airy and spacious, much more than the cramped little flats of Delhi that I’ve grown used to. Kishan offers the men drinks, while the women pass around a bottle of Coke, and conversation begins to flow at a homely pace. He talks about life in the pind, the future of his two sons, his romantic encounter with his wife in Jammu, and captivating tales about his extended family.

A few drinks later, Kishan’s wife, who had slipped away into the kitchen after exchanging a brief greeting with us, announces dinner. Laid on the table are saagand baingan ki sabzi, made from veggies fresh off the farm, and an assortment of other vegetables and lentils. In less than five minutes, we have forgotten our city manners; we are licking our fingers, sharing our plates, gossiping about people we barely know, and laughing at a friend who can barely understand Kishan’s alcohol-tinged Punjabi accent. While my friends struggle with the language, I am glad for bits of it I’ve subconsciously picked up while living in a Punjabi household, perhaps my only surviving Punjabi trait.

Evening turns to night, and as we part ways, Kishan offers to accompany us to the Indo-Pak border at Sadqi the next afternoon, with some homemade lassi for the way. He also promises to invite along his friend who lives close to the border and would make a good guide for all our questions. A single weekend in Punjab has convinced me that we, city-people, have much to learn about egalitarianism from our counterparts in rural India.

I suddenly understand what my grandmother meant when she said that living in Punjab is like being part of one big family, and I long to live in the world she grew up in.