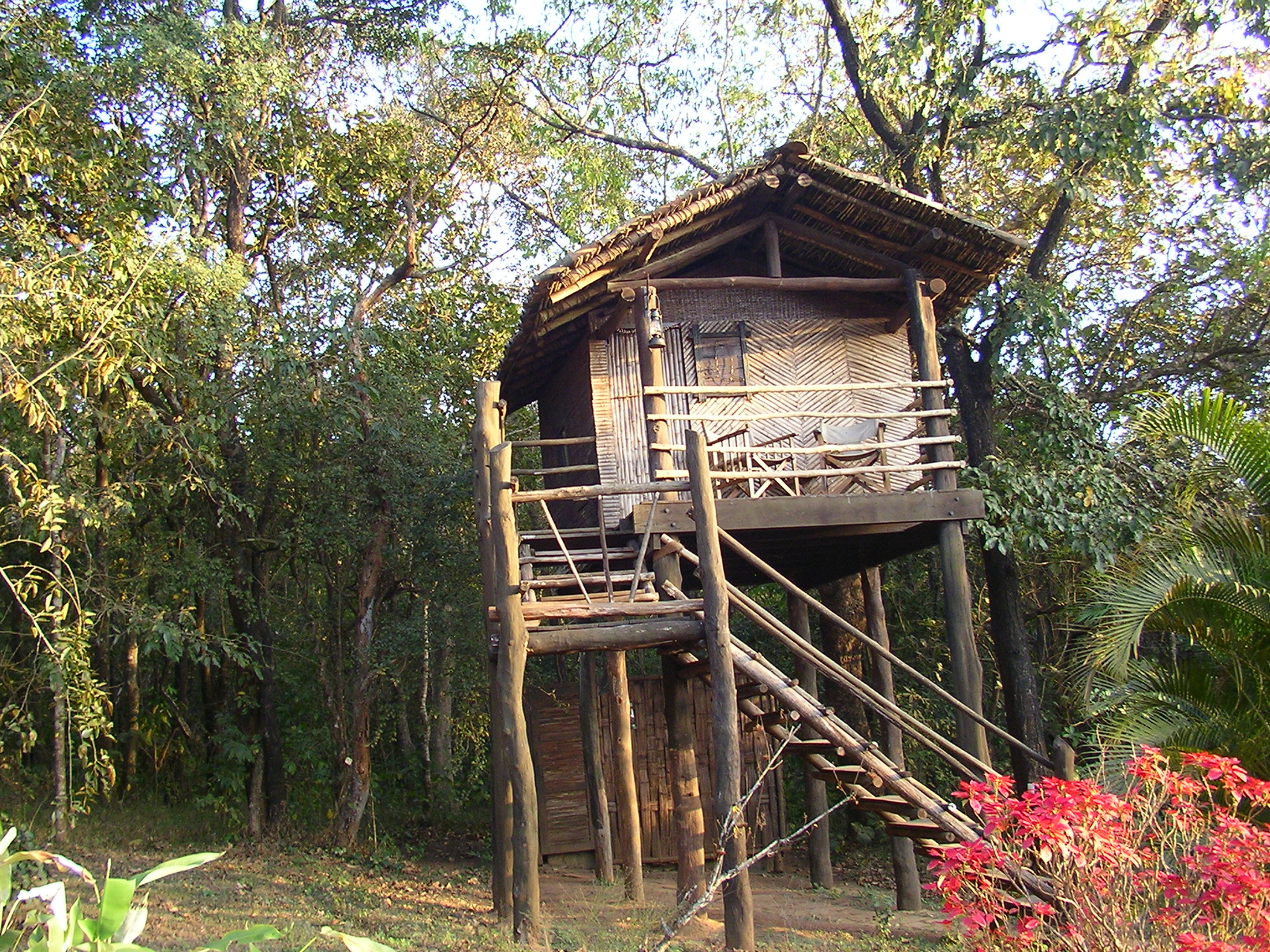 My choice of travel accommodation has slowly transformed from anything-cheap-goes in my student days, to pampering value-for-money hotels / resorts during my short-lived corporate life, to anything offbeat that offers a chance to interact with the local people since India Untravelled happened i.e. now. With several of the latter under my belt since I moved back to India almost 9 months ago, I’ve decided to highlight, review & convince you to experiment with such off-the-beaten-track living in this weekly Sleeping Spotlight.

In the true spirit of traversing the roads less travelled, I decided to turn 24 (in February 2012, finally accepting my entry into adulthood) amid the wilderness of the Western Ghaats. And such charming wilderness it was. Maneuvering a long dirt track in the dark to find The Hermitage, with no directional signs, and broken electric fences between us & the jungle. Lanterns, torches, moonlight & a billion stars in place of electricity. A cozy tree house aka The Machan raised on stilts at the edge of the forest. Deer calls past midnight. No phone or internet connectivity. An open-air bathroom with lots of sunshine, the trees playfully shedding leaves in the water, the occasional spotting of tadpoles in the bathing area. Bats flying into the twilight. Heavy footsteps of a bison along a clearing through the forest. Fascinating stories of forest-life from the host family, who have lived in this wilderness for the last 32 years!

The Machan at The Hermitage.

David & Morvarid’s is one of those stories that you have to see to believe, and when you do, you never stop wondering. As derived from multiple sources, including their loyal driver, their daughter & they themselves, the story starts in the early 1980s, when the two, young as they were, very much in love with each other & the outdoors, and with a certain disdain for the ways of the cities, negotiated with the forest department and bought a little piece of land, literally in the middle of nowhere in the forest, that could only be accessed by a jeep / scooter through a long dirt road. They cleared a minimal number of trees, planted small rows of garden vegetables, built themselves a little shed, and accepted the forest as their home. As they would soon realize, for 3 months each monsoon, the dirt road would flood, completely cutting them off from the mainland. With the help of the tribal village folks at walking distance from their settlement, Morvarid learnt to identify edible bamboo shoots & wild mushrooms in the forest, much like Into the Wild. Only they lived to tell the tale.

David, owner & host at The Hermitage.

Katrina, their daughter, went to boarding school and then to Australia to study the environment (no surprises there, who wouldn’t fall in love with these forests after being born in their midst?), and in the meantime, the parents decided to build a machan to invite travellers. No phone connectivity meant Katrina would take bookings in Australia, and relay them to the couple each night when they drove to what they fondly called ‘phone hill’, the closest point where their mobile phone caught signal! They got their first phone in 2003, a landline that caught a signal reflected off the hill, and an unreliable one at that. Dial-up internet caught up a few years later, but at speeds that will probably drive you & me out of our heads.

Hiking along the Western Ghaats.

Getting There: The most convenient airport is Goa, from where you can take a taxi or bus (which runs only in the morning and takes almost half a day to reach). The nearest train station is at Belgaum. The Hermitage is located in the forest near the sleepy village of Khanapur, and about 40 minutes from the main town of Belgaum.

Where to Stay: The Machan, a tree house raised on stilts. The Kadaba, a a typical village house made in traditional style. The Gota, a relatively modern cottage and the only one with electricity. I would personally recommend The Machan.

Activities: Short hikes up the Western Ghaats, offering panoramic views of the valley below and not half as tiring as the steep Himalayan hikes. Bird-watching. Forest walks. Tribal village walk. Do-nothing.

Responsible Travel: David’s love for the wild has culminated in many initiatives to save the forests of the Western Ghaats. The family organically grows its own vegetables on the surrounding land. No electricity (except in one cottage) to maintain the natural environment of the forest for the wildlife it harbors.

Good to know: No mobile connectivity or internet. No electricity. Home-cooked food. Good for anyone looking for a real escape from daily life, forest enthusiasts, bird lovers, stargazing opportunists.

Have you been to The Hermitage? Or any such wilderness getaways?