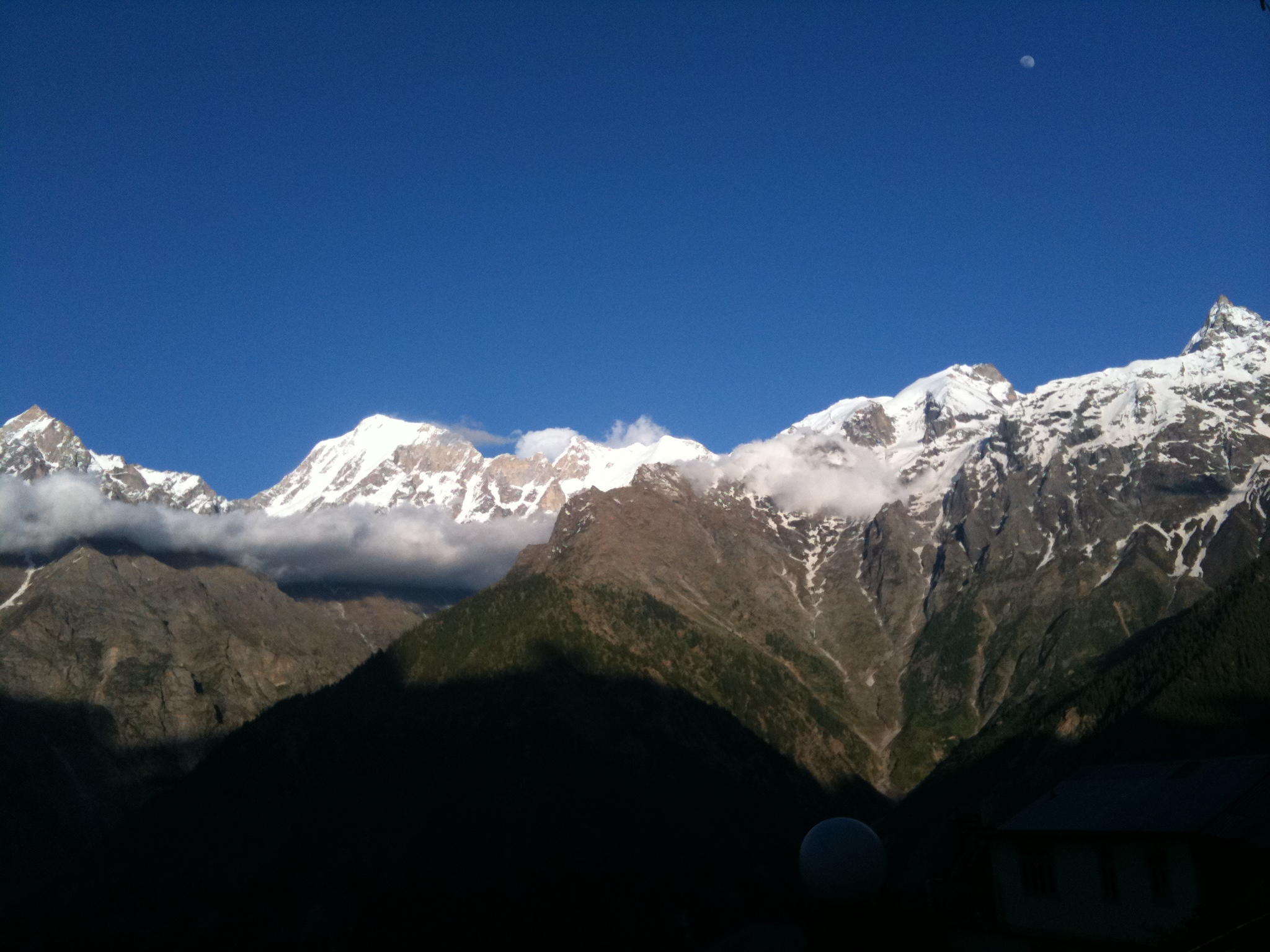 The drive from Shimla to Reckong Peo to Kaza is exhilarating but not for the faint-hearted. A once-in-a-lifetime experience!

I’m en route to Spiti and going through a “sometimes the journey is as beautiful as the destination” moment. The drive from Shimla to Reckong Peo to Kaza – with a stopover at Kalpa – easily claims Himachal Pradesh to be the most beautiful state in India for a mountain lover.

I watch the mighty Himalayas blanketed in Cedar trees for the first quarter of the journey. The landscape transforms to pine trees, until the mountains gradually become bare.

I catch a glimpse of the River Satluj flowing below in a stream of clear white water. It gradually reduces to a blue-green trickle in the mountains. Then it meets the dam under construction in the Rampur district and changes to a disheartening brown.

The winding road from Rampur to Kinnaur has been dug from the base of the mountains, leaving their rocky protrusions untouched. I’m stunned as I drive under these protrusions. It’s as though the Himalayas are watching over me.

I’m overjoyed being surrounded by the grandeur of the Himalayas on all sides, and unprepared for the snowy guest appearance of Mount Kinnaur Kailash.

My driver friend from Spiti tells me that once every year, residents of all villages at the base of Mount Kailash undertake a 3-day camping expedition up to Mount Kailash. It’s one of the many facets of the Himalayas they worship.

I spend the evening at an often-dismissed transit town – Kalpa. It takes my breath away as I watch the sun go down on the peak of Mount Kailash.

Kalpa reminds me of Chamonix, the French gateway to the Alps. It has its own little market, a Buddhist monastery and a temple dedicated to the local deities. The more developed town of Rekong Peo is just a half hour drive away. I think it’s the perfect place to indulge in the Himalayan majesty without the crowds of Shimla and Mussoorie.

FAQs about your journey from Reckong Peo to Kaza

Distance Between Reckong Peo and Kaza

The distance between Reckong Peo and Kaza is 210kms approximately. While the road conditions might not be great, BRO is doing a great job in maintaining and building the roads.

How to go from Shimla to Kaza via Reckong Peo

It’s possible to take a bus or taxi to reach Kaza, although some bravehearts do it on their bike. But note that the roads are not for the faint-hearted!

How is the road condition from Reckong Peo to Kaza?

As with many mountain roads across India, the journey from Reckong Peo to Kaza is stunning, but with several patches where you might want to hold your breath and hope to survive. Some precarious, narrow turns take you over cliffs with sheer drops. Sometimes it feels like the bare mountains might crack any time and land on your car. Luckily, as compared to the terribly broken road from Manali to Kaza, the road from Reckong Peo to Kaza is pretty well maintained (or at least it was at the time of writing this article).

How to reach Kaza by bus?

There are usually two buses leaving from Reckong Peo to Kaza, but at times they just run one, which leaves at 7 am in the morning. The bus tickets are usually around INR 300 – 350. The bus reaches Kaza by 6pm, unless there’s a road block or landslide. If you are traveling on a budget, this is the best option to reach Kaza from Reckong Peo.

How to reach Kaza by taxi

The journey from Reckong Peo to Kaza by taxi takes around 7-8 hours, but don’t trust that promise; the mountains often have their own plans! With the privilege of private transport, you might also want to stop at some scenic places and soak in some of those amazing views. The price for a taxi is usually INR 4500 – 6000, depending on the season.

Would you dare to do the journey from Shimla via Reckong Peo to Kaza?

I Love Spiti: A Campaign to Save Spiti Valley from Single Use Plastic

10 Offbeat Things to do in Spiti Valley

Komic Monastery: The Legend of Moving Monasteries in Spiti

Hitchhiking on my First Solo Trip to Spiti Valley

An Unexpected Introduction to Spiti Travel

How Volunteering in Spiti Led Me to an Unexpected Friendship