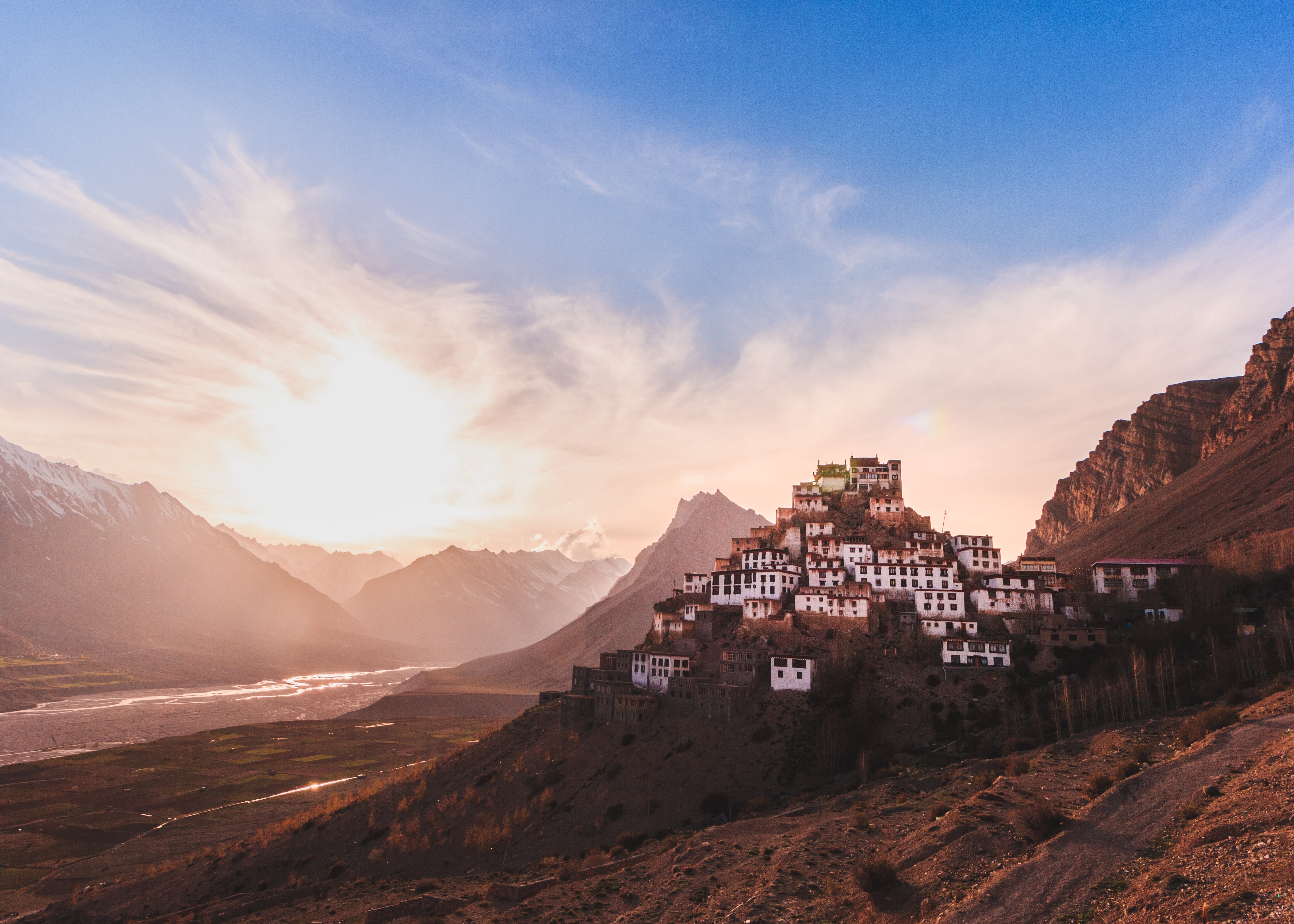 Spiti travel on your mind? A quick introduction to what awaits in this incredible part of the world.

My first tryst with Spiti, Ladakh’s lesser-known cousin, was an act of online serendipity. I stumbled upon Spiti Ecosphere, a social enterprise pioneering sustainable tourism in the Trans-Himalayan region of India. As it called out to me, I impulsively decided to take a sabbatical from work to volunteer travel in this cold mountain desert.

Nothing I read online could have prepared me for the 20-hour breathtaking, back-breaking journey from Shimla. We winded up along roads dug from the base of the mountains, with rocks hanging above our four-wheel drive, creating the illusion that the Himalayas were watching over us.

Also read: I Love Spiti: A Campaign to Save Spiti Valley from Single Use Plastic

I’m fascinated as Tenzing describes a mystery mountain close to his hometown in Spiti. It changes color every time you go back, he says, convincingly. He’s my first local friend, and the expert driver who we’ve entrusted with our lives, up the precarious mountain roads from Shimla to Spiti.

Meanwhile, we’ve been stuck in a landslide for almost 5 hours now, watching men relentlessly battle a piece of the mountain on the road. A part of me is glad; it has bought me 5 extra hours of Tenzing’s stories.

The little wrinkles on his tanned forehead hardly give away his 40 years, and his gregarious nature is my first introduction to the mountain folks in Spiti. Deep down, I hope that my Spiti travel adventures can lead me to his mystery mountain someday!

As I step out of the jeep in Kaza, Spiti’s capital, I see the sun gradually sinking behind the mountains in the distance, coloring their snow-capped peaks a bright orange. The sky is streaked with yellow light as the ball of fire disappears, leaving behind a dark outline of the mountains against the moonless sky. The only sound I can hear is the river gushing below. Welcome to Spiti, I think to myself.

I look around me to soak in the dramatic change in landscape, from dense greens on the mountain slopes until Kalpa, to the brown and bare hills that surround me on all sides in Kaza. The only vegetation that can survive Spiti’s extreme climate are barley and peas, making Ecosphere’s greenhouse initiatives invaluable to Spiti’s population.

At a height of 3,800 meters (12467 feet, or well over 2 miles), it takes me a day to acclimatize to the thin air in the region. Walking uphill at a steady pace leaves me gasping for air each time. It takes me another few days to figure the optimal layers of clothes to wear. The sunrays are penetrating enough to burn my skin, but the moment I step in the shade, I’m cold.

Also read: 10 Offbeat Things to do in Spiti Valley

The many faces of Spiti travel

I soon discover that Spiti is a purely Buddhist society, with some of the oldest Tibetan monasteries in the region. I acquaint myself with local traditions, the most common one being that you always walk, bike and drive clockwise around manestones (stone structures with carved stones on their surface) for good omen.

My volunteer work with Spiti Ecosphere in Kaza gives me ample time to explore this little town. It is the closest I can get to civilization, as we know it, in Spiti. Kaza’s old bazaar surprises me with its choice of cuisines, ranging from local dishes to western food, and even wood-fired pizzas (at a restaurant called Sachin Kunga Nimpo).

A string of little stalls sell local handicrafts, and daily essentials like sunhats and sunglasses. An ingenious entrepreneur called Amit has also set up a cyber cafe by tapping upon the army satellite connection. Internet access at 3,800 meters is a commendable feat and despite its tortoise speed, allows me to keep in touch with the online world.

My first weekend of Spiti travel takes me to what is known to be the highest continuously inhabited village in the Himalayas. I’m pleasantly surprised to see that the hills at altitudes higher than Kaza are much greener, thanks to a more adaptive terrain.

On our way up, we stop at Langzha, a beautiful little village home to a dozen houses and a little school. I spend a few minutes sitting atop the roof of a house, and lose myself in the striking combination of green, brown and white mountains. Mountain kids play on neighboring rooftops, and I begin to wonder what life must be like growing up in a region so aloof from the rest of the world.

In retrospect, I could’ve held that thought until I reached Komic, the highest of the villages in Spiti. It is a 6-hour hike from any visible signs of civilization at Kaza, and houses a population of merely 84 people in 13 households. If you discount the occasional sightings of the Blue Sheep, Red Fox, Tibetan Wolf, and the much elusive Snow Leopard, that is.

Komic’s landscape leaves me at a loss for words. How I can even begin to describe being so close to the majestic Himalayas, that you can feel the cold winds on their leeward slopes, see the crevices in their aging rocks, and measure the proximity of their peaks to the clear blue sky?

I later understand that the majority of Komic’s population derives its conviction to live at such an altitude from being in the vicinity of one of the highest monasteries in the Himalayas where monks live and pray. Komic monastery, with its colorful shades of red and orange, is the center of legends that have trickled down for decades, making it a symbol of great reverence and hope in the region.

In the neighborhood of Komic is a small sign announcing the tiny village of Hikkim, seeing which my friends excitedly dig out envelopes from their pockets. Hikkim is believed to have the highest functional post office in the world – though I hear the postman would rather be left in peace 😉

On subsequent trips from Kaza, I discover the blue-green lake of Dhankar that can make anyone introspective, the 900-something-year-old monastery of Tabo, the ingenious vertigo-inducing mountain ropeway of Chichum connected two peaks over a deep gorge, the soothingly green valley of Pin complete with trees and waterfalls, and the mummy of Giu, which as legend has it, still bleeds when pricked and grows hair on its mummified skin. Oh the wonders of Spiti travel!

In my short stint in Spiti, I’ve subconsciously developed a close bond with this golden land. I’ve become accustomed to the extreme weather, the infinite hospitality of the locals, and even the lack of communication with the world outside.

Spiti has taught me the immediate need to care for its fragile ecology, so it can be preserved in a way such that 10 years from now, travelers will be able to appreciate its raw beauty the way I did.

As I’m driven down the dirt road to Manali, I bid goodbye through the car window to the mist-covered white peaks and their brown brothers and sisters. I’m carrying a part of Spiti with me since, a little desert in my heart. I’ll be back soon, I assure myself.

Also read: How We Can Embrace Sustainable Tourism in India

Travel can be organized via Ecosphere. All Ecosphere trips are carbon neutral and also offer volunteer travel options.

Spiti’s ecology is as fragile as it is beautiful. During my volunteering stint, I picked up a few tips on being a responsible traveler in the region.

Carry as little plastic & non-biodegradable things as possible, and dispose off what you carry only in Kaza, where recycling initiatives are in place. Carry all toxic waste such as batteries, back with you.

Use biodegradable soaps and detergents

Especially if you visit or camp near water bodies.

Order local Spitian dishes, buy local raw materials for cooking instead of packaged foods, and remember that water is a scarce resource.

It’s the only way to ensure that we do not deplete the valley of its cultural and natural heritage.

What are you most excited about for your Spiti travel adventures?

An edited version of this article appeared on Offbeat Travel