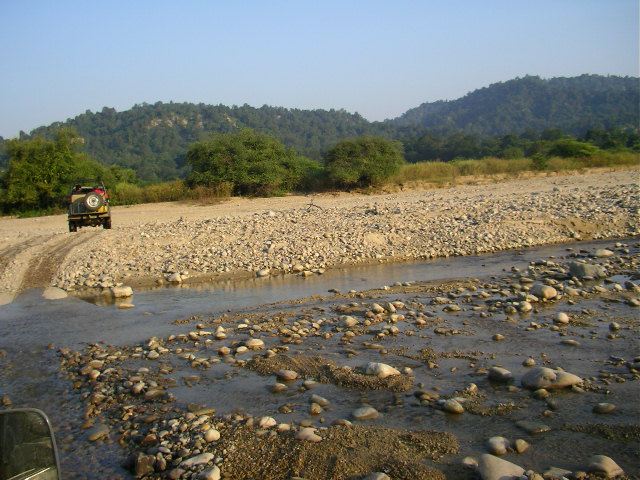 Beyond the tiger chase, a glimpse into the life of other Jim Corbett animals.

As our jeep manoeuvres through the broken forest trail, a gale of wind blows off the hood of my jacket and whispers in my ear. Suddenly, I’ve forgotten that I’m cold and sleepy at an hour when even the sun is tucked in. I’ve been to Jim Corbett National Park before, but only on a tiger chase. Today, I want to unearth the mysteries of its wilderness.

The fading moon creates an eerie atmosphere in the backdrop of bare trees. I anticipate the creatures of the jungle to be half asleep. But with my eyes riveted on their territory, I spot a pair of vultures courting on a treetop, a flock of ducks playing with a cow, a polygamous muster with one peacock and nine peahens on the hunt for food and two jackals suspiciously trying to cut across the fence to an elephant’s shed. As Airtel would say, Har ek friend zaroori hota hai.

The first rays of sunlight promise to actualize our tiger dreams. Our jeep jerks to a stop. A fresh set of pugmarks belonging to a tigress and her cub mark the sand to our right. A chill crawls through my spine as I imagine the big cat deliberately creating those pugmarks to mock us lesser mortals. Without realizing it, we have entrusted our lives to Santosh, our driver and guide, who is now telling us brave stories of being in a tiger chase in this very spot.

My eyes follow four men walking in the distance. Two roads diverge in the woods, and they take the one less travelled by, reminding me of Robert Frost. They are heading to a zone of the national park that is officially closed to visitors, to inspect the post-monsoon re-laying of the road. A bulky man walks behind them. His long bushy moustache is enough to scare one of us, but for the creatures of the jungle, he is carrying a rifle which he looks ready to use at the slightest hint of danger to the men he must protect. It is a wonder how these creatures have adapted to the screeching sounds of a jeep, yet flee at the first sign of a walking human.

Our own man sets the engine roaring. For the next three hours, I let myself be fascinated by the magnificent Jim Corbett animals. The bright colours of the Kingfisher, the green camouflage of the Chestnut Bee-eater, the if-looks-could-kill expression of the Eagle, and the unrelenting pecking of the Woodpecker. A Sambar Deer almost has me leaping off my feet, with its suspicious, nervous movement towards a water hole. Only five minutes ago, Santosh described the Sambar Deer as the jungle’s most naïve prey. When it spots a tiger, it moves closer to it to verify that it really is a tiger, eliminating any chances of an escape!

It is mid-day now. The tigers are playing catch me if you can with us, reigniting our hopes with new pugmarks each time we are close to giving up. To my untrained eye, these pugmarks all look the same, except for marginal differences in size. It’s hard to imagine that a tiger census could count Corbett’s 164 tigers, entirely by analysing pugmarks. Wouldn’t that be amongst the world’s most bizarre jobs? Santosh tells us that forest authorities are fixing cameras along waterholes now, to make the census easier and more accurate. That’s a footage that could make a National Geographic documentary, I think to myself.

As the sunlight starts to dim, I sink back into my seat and prep myself to say goodbye to the wilderness and Jim Corbett animals. My subconscious self is carrying the image of mighty Khalif, that Santosh has painted in my head in his no-nonsense demeanour. Khalif is Corbett’s largest tiger, a handsome fellow with bright stripes and a glowing skin, dramatically described as longer than our jeep. You have to be really lucky to get closer to him than those elusive pugmarks, but you have to be luckier to unravel the secrets that his abode reveals to a chosen few.

This post was originally written for and published in the Hindustan Times.

Sarmoli, Uttarakhand: Where Locals Run Marathons and Their Own Instagram Channel

Responsible Travel Tips for Authentic Meaningful Experiences on the Road