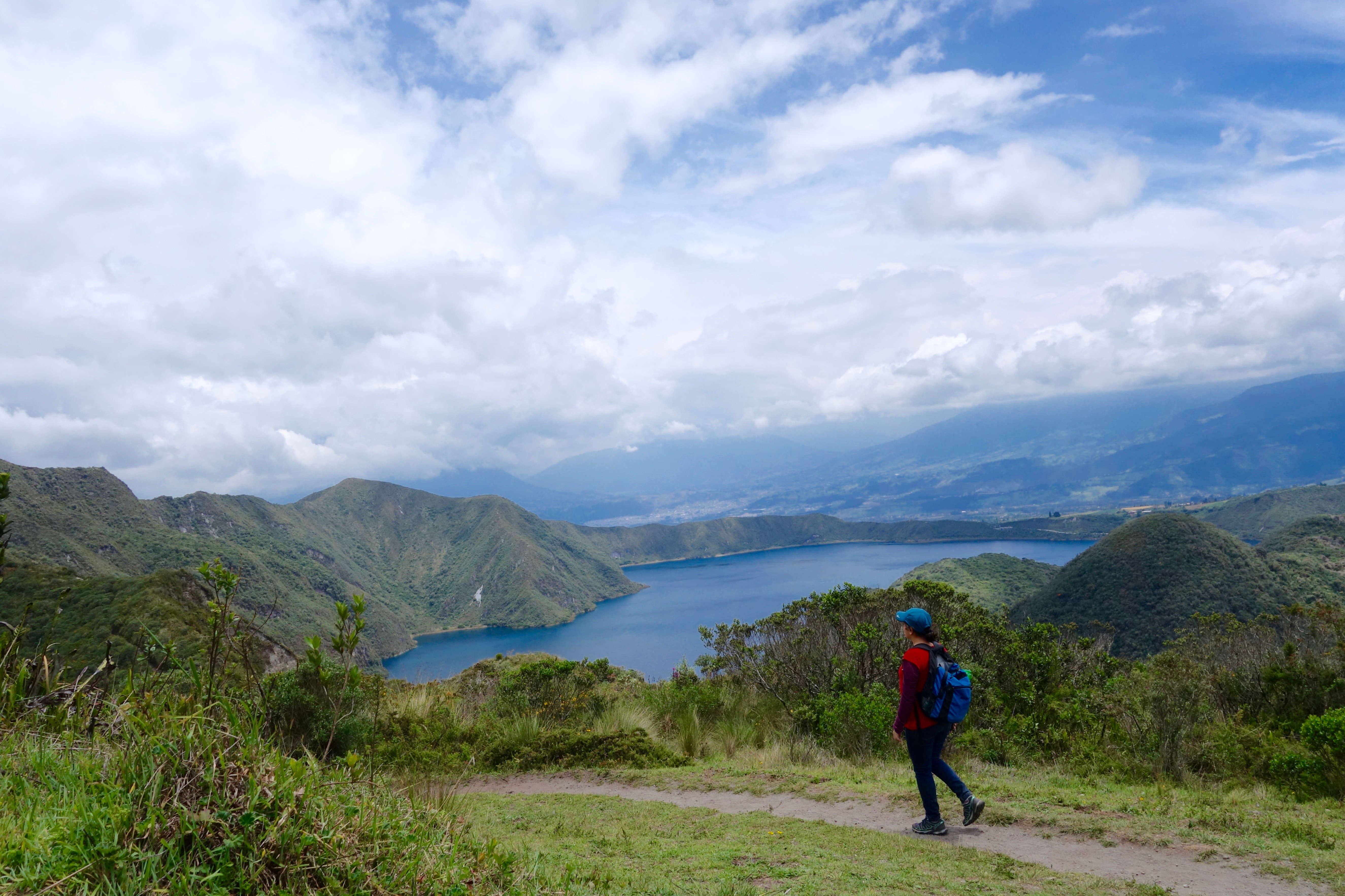 My tryst with Ecuador started even before I boarded my flight from New York to Quito two weeks ago.

I think it was 2014 and I was off on my first trip to Central America (Guatemala) then. The elderly Ecuadorian gentleman sitting next to me on the flight, wearing a black hat above his ponytail, smiled warmly as I tried to practice my rusty Spanish with him. When we got off in Miami to change flights, he waited in the departure area to hug me goodbye. Ecuador is your kind of place, he said, as we parted.

I had no plans of visiting Ecuador then, and quickly forgot about him, his kind eyes and his wrinkled smile.

Until I nervously boarded my flight two weeks ago – my first time in South America, alone, a newbie vegan.

I saw him, again and again, in elderly men, wearing black hats with long ponytails, with an understated elegance, on the cobbled streets of Quito and in indigenous Andean villages. And his words sort of sum up my first impressions of the country:

The first thing that strikes you in Quito: How can any capital city be so beautiful?

My neighborhood in Guapulo, Quito.

On that first night in Quito, my taxi from the airport drove through clouds that had engulfed the cobbled winding streets. I woke up to a view of the lush, green, forested Cumbaya valley – an old basilica and colorful slate roof houses surrounded by the imposing Andes – from my Airbnb window. Lying on a hammock in my artistic, bohemian neighborhood of Guapulo, I saw laid back locals walk up and down the narrow, colorful, graffiti-filled streets, going about their lives as the imposing mountains watched over them.

Sure, at busy times of the day, the streets can get crowded with cars and people – as in any big capital city. But walk a little, take the stairs and find a quiet corner in a park, and it’ll be just you and the mountains – unlike any big capital city I’ve been to.

Also read: Honduras: We Travel to Realize Everyone is Wrong About Other Countries

The Andes are a treat for solitude seekers and solo travellers.

I was delighted and surprised on my first hike along the crater of Cuicocha Lake – not just because a prehistoric volcanic eruption created two big uninhabitable islands in the middle of its gorgeous blue waters, almost akin to the visual depiction of paradise – but also because here I was, all by myself, at 3,000 meters altitude, hiking for 5 hours, without a guide, feeling totally safe! That was the beginning of an intimate love affair with the Andes, one that continues on long solo hikes in Central Ecuador.

In Quito, it so happened that my Airbnb host was traveling and I had her apartment to myself; though a little restless about having to figure out the city entirely on my own, I never once felt unsafe – not in taxis and not while walking after dark. I didn’t even come across a single tout at the bus stop.

I have heard about people getting robbed in downtown Quito. But to me, the locals have been nothing but honest, friendly and curious about India. I hope it stays that way!

Also read: Solo Travel: To Go or Not To Go?

If you do your research, being vegan in Ecuador can be healthy and delicious; think quinoa!

Happiness is a quinoa burger in Ecuador!

My friends laughed and recommended fruit juice when I mentioned vegan and Ecuador in the same sentence (I’m looking at you, Zara and Ashray :p). So imagine my delight when I found an all vegan Ecuadorian resto in Quito – and my first meal was choclo soup, lentil croquettes, steamed vegetable tamales and a juice of quinoa and oatmeal!

I went on to discover that in indigenous Quichua communities, a large part of the diet is traditionally vegan – and perhaps the origin of trendy health food in the urban world. With my host family at Loma Wasi village, I typically ate soups of quinoa, corn and amaranth, with popcorn (quirky, I know) and a mash of sweet potato, broccoli, radish and home grown veggies with rice, rounded off with fresh lemongrass or chamomile tea with leaves from the front yard.

While eating out, I’m avoiding local, hole-in-the-wall kind of places because the smell of meat is just too overpowering. But in expat-friendly towns like Cotacachi, Otavalo and Baños, I’ve found plenty of vegan-friendly restos serving both local food and other cuisines with local ingredients – think quinoa! A little bit of research goes a long way towards finding a delicious vegan meal.

The indigenous Andean way of life in Ecuador is my vision for the world (and particularly, India).

With my Quichua host family in Tunibamba village.

I spent a week living with an indigenous Quichua family in the small community of Tunibamba, tucked away between Imbabura and Cotacachi volcanoes. What struck me most was the way they embraced economic development and urban comforts while keeping their traditional way of life – in other parts of the world, like in my Mayan village in Guatemala, it’s almost always a tradeoff.

With expat-influences in the nearby town of Cotacachi, the indigenous people have easy access to good supermarkets and varied cuisines. Yet agriculture continues as it always has; my host family grow most of the vegetables and plants they need for their consumption, and trade any extras at the Sunday market for things they don’t grow. They keep their traditional attire (flowery hand-embroidered white tops, long skirts, and beaded, layered necklaces for women), their faith in shamans and dream interpretations, and a diet – partially vegan – that leads to older generations being extremely fit even in their late 90s. Walking in Cotacachi, I once spotted an elderly Quichua woman in her traditional dress looking up something on an iPad!

I also learnt that these communities lean towards matriarchy, and in a world where women are looked upon as victims, it fascinated me to no end. This experience deserves a post of its own.

There’s more to Ecuador than the Galápagos Islands.

Volcano Tungurahua erupting on a hike near Baños!

I saw so many people flying out to the Galapagos Islands directly from Quito airport. That means missing out on the incredible Ecuadorean Andes – active and inactive volcanoes, indigenous communities and their way of life, crater lakes, impressive hiking trails, cloud forests, and even the world’s tallest mountain Chimboraza (not Everest if you measure it by distance from the earth’s centre)! And the forests, wildlife and tribal way of life in the Amazon, and the coast with its black sand beaches and desert-like geography. My wishlist has grown everyday and in every conversation since I’ve gotten here.

I’m so in love with the Andes that I don’t know if I’ll make it to the Galápagos. But I hope to get to know some Amazonian tribes in as authentic a way as possible, and perhaps offer myself up for some traditional Shamanic healing.

Look out for soon on the blog:

Subscribe to my monthly newsletter (or to individual posts on the top of the right column) so you don’t miss any of my posts.

My Book – A National Bestseller in India!


I guess we all know that our planet is in trouble.

How do you learn to think unconventionally in a so

Help me out folks. How do you let the ugly politic

"There is freedom waiting for you,
On the breezes

Is it a good idea to travel / promote travel in In

The latest on my blog: “The Ultimate Guide to Su