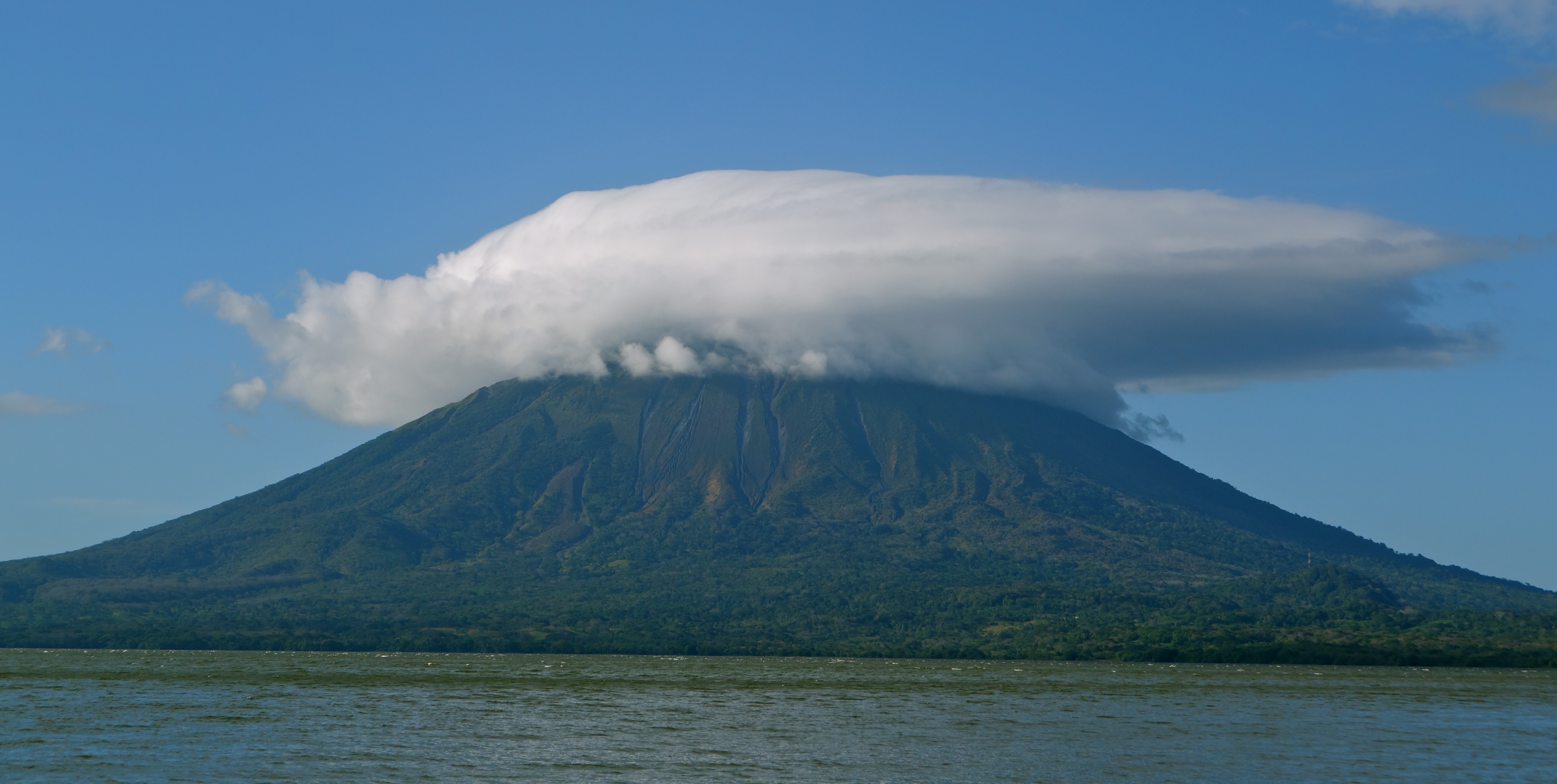 I lay in a lounge chair on the breezy deck of a slow ferry, as it traversed the choppy waters of the vast Lake Nicaragua. Every few hours, we stopped at remote islands to drop off essential supplies and a few passengers. We had ourselves photographed by island dwellers who came with their families to enjoy this rare incursion in their lives and catch a glimpse of the outside world!

It was hard to resist the charm of the Solentiname islands we passed by, but when we finally arrived in Ometepe ten hours later, I knew it had been worth the journey.

First glimpse of Ometepe from the ferry.

The eruption of two volcanoes rising from the expansive Lake Nicaragua created two circular land masses joined by a narrow strip of land – and this island of two mountains was christened as “Ometepe” from the ancient Nahuiti language.

For a blissful week, we lived in the shadow of Volcano Concepcion and Volcano Maderas, on an organic farm called Finca Montania Sagrada, run by a group of Europeans. Like many expats in Central America, our hosts had packed up their lives in search of an affordable tropical paradise, and fallen in love with Ometepe’s magnificent backdrop and earthy way of life.

Our balcony at Finca Montania Sagrada.

Indeed, after weeks of traveling through undeveloped Garifuna villages in the Caribbean and remote settlements by the River San Juan, Ometepe was a balm for my weariness.  Lying on a hammock, the strong winds swayed me till I fell into a deep slumber in the backdrop of mist-laden volcanoes. By night, tens of shooting stars fell from the night sky, temporarily filling the holes in my soul.

When the outdoors called, we kayaked in the pristine ecosystem of River Istian, rowing through mangroves and marshlands filled with yellow-bellied flycatchers and sea eagles, eagerly looking for the elusive caymans. Against the rough waters and howling wind, we rowed into the most magnificent sunset in the backdrop of the halo-covered Volcano Concepcion. We mountain-biked along dirt roads, past rolling meadows, grazing cattle and sleepy village homes, never once comprehending how life just went on amid such surreal beauty.

Rowing on Lake Nicaragua in a magnificent backdrop.

A white bellied sea eagle keenly looking out for prey.

Midway through my stay in Ometepe, a rare longing for India caught me after 4 months of being away – 4 months of subsisting on rice and beans, and conversing in broken Spanish. As the magical realism surrounding Ometepe would have it, I ran into a German guy who spoke Hindi, and heard about an organic vegetarian cafe on the island that served a delicious Indian dal curry.

On a scorching afternoon, we set out on a long bicycle ride to look for this Cafe Campestre. Sweating and hopelessly lost, a local stopped to ask if we needed help. We asked for directions, he nodded and told us to follow him. For countless, long, winding kilometers, we rode behind him. Our destination finally loomed into view, and while we dreamt of the flavors that awaited us, I was surprised to see him turn his bike and ride back towards where we came from.

Donde vas? I yelled. Where are you going?

A mi casa, he replied.

It turned out he was heading home when he met us, in another direction than our cafe. I was baffled. Why didn’t he just tell us the way?

Porque las callas no tienen nombres aqui, he yelled as he rode away.

Because the streets have no name.

Cycling into the sunset.

Have you witnessed unexpected kindness on your travels?