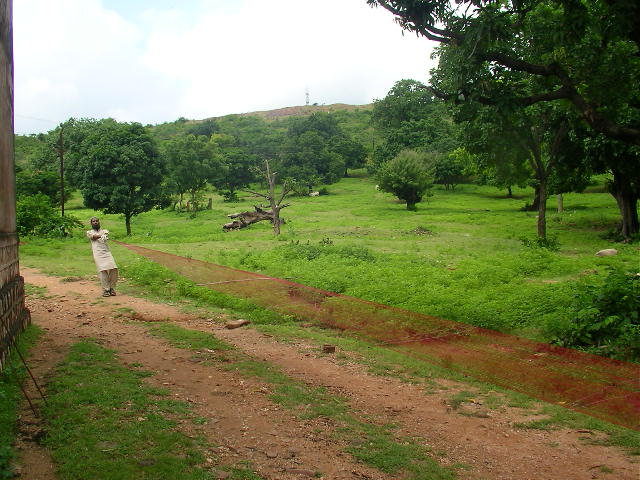 As we drive into the heart of India, dubbed Madhya Pradesh, I awake my sleepy self to the sight of the Betwa River, a beautiful expanse of clear water vigorously flowing through a dam. I am suddenly kicked about venturing into an India that is far off the tourist circuit; Spiti & Hegdenagar feel like a long time ago.

My notion that this landlocked state will be devoid of much greenery is dispelled ten minutes past the Uttar Pradesh border. We cross large plots of land growing their own wilderness, and Pranpur, a little village just south of Jhansi, throws us a cozy green welcome. I immediately delight in the absence of crowds, and the pace of passers-by. Unlike other rural parts of India I’ve been to, however, the locals do not seem inquisitive about seeing us walk their streets. That is not to say that they are not welcoming; each time we try to peep inside a village hut, we get invited in and offered tea & food.

Men sort layers of Chanderi Silk in open air in the fields of Pranpur.

As we stroll through the two-ish kilometer squares of Pranpur, my friend from the village points to me the three communities that inhabit it. Baboo-da, a 60-something frail man represents the potters; their women make mud utensils (which they use for cooking) and small figurines of gods & goddesses, while the men make bigger festive murals. When I ask him why men don’t make utensils, he smiles broadly to reveal his three teeth, and shyly says it’s the women’s forte.

Potter Bhaiya Lal displays the mud mural he has made for the upcoming Dusherra celebrations.

Baboo-da’s wife displays her mud utensil and Ganesha figurine. She proudly claims that the food made on mud utensils tastes much better!

We walk past a traditional step well, locally called a baoli, where kids splash about in the water. The lack of excitement to see foreign faces is affirmed by the children, who don’t watch us curiously or wave to us. Their indifference makes me wonder whether they’ve ever met people from outside of their little village, because it couldn’t possibly be the other end of the spectrum; I see no non-local faces during my weekend visit.

A traditional step well (baoli), made such that people can step down to the surface of the water to fill their buckets.

A little deeper into the village, I constantly hear clicketty-clack sounds. I can sneak a peak into each household we cross, through its open doors, and soon realize that the sounds belong to the looms of the weavers. I meet men and women, young and old, weaving Chanderi Silk saris in different styles, colors and designs. Randhir Kohli, revered as a master of weaving, invites me to try my hand at the loom. His experienced hands make the intricate work seem so easy that my clumsiness surprises me!

Perhaps if Pranpur was in another country, it would’ve been a hotspot for the talent it homes within its narrow borders. But India is peculiar that way; people (women) all over the country are heavy buyers of Chanderi Silk saris, an expensive variety of the traditional Indian costume, but few know that it is weaved & loomed in the forgotten village of Pranpur, where weavers are barely compensated for the days that go into the making of a single sari. I was guilty of that ignorance until a month ago.

The last of the village communities has reduced to two households; that of metal craftsmen. The head of the household greets us with a warm smile, but the sadness in his eyes reflects the state of his business. I look closely at his finished ornaments and instantly draw a parallel to some antiques I’ve seen in a museum in the nearby town of Chanderi. I wonder if his work will be admired only long after our generation is gone…

Pranpur gives me my first insight into an India that rejoices in its crafts. Hopefully some day, when the middlemen are all gone, I’ll be able to use the word “thrive” instead.

This post was featured on Britannica & Travel Another India.