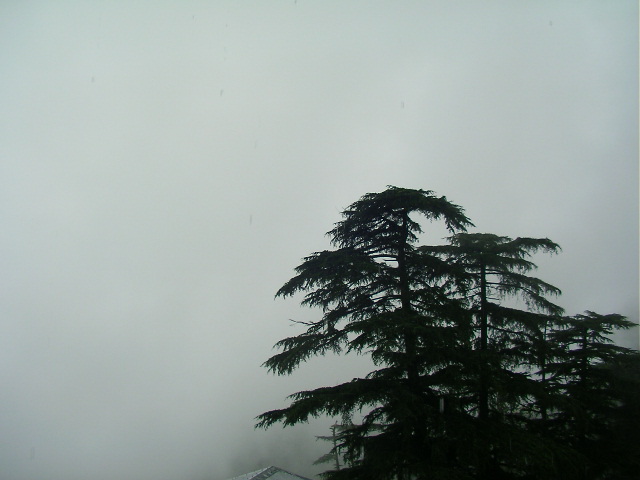 Mcleodganj is perhaps every backpacker’s rite of passage to India. Except that it is so unlike India, I feel I’ve skipped a few legalities, missed a few stamps on my passport, and entered a world I was taught is forbidden.

I see a foreign face around every corner, interspersed with men and women robed in red & orange, lending a tranquil vibe to the chaos on the narrow streets. I am fascinated by the small stalls & shops selling colorful bric-a-brac, little memorabilia from Tibet that has been reproduced elsewhere in India or Nepal. The side walls are covered with graffiti about Tibet, a reminder of the refugee lives of the people in Dharamsala. This has to be the only hill station in India where no shop-owners are shouting to sell their goods, nor touting foreign travelers; I can feel a spirit of acceptance among the people, or maybe a disguised form of dejection.

I wonder if in 1959, when His Holiness the Dalai Lama found shelter in Dharamsala from China’s occupation of Tibet, anyone would’ve thought that Tibet will sustain its magnanimous culture and continue the much-needed propagation of the teachings of Tibetan Buddhism. I’m given to hear that Mcleodganj is much more akin to Tibet than present day Tibet itself, a thought that makes me proud of India for physically & financially supporting a culture that could’ve been long dead.

I allow myself to be distracted, first by the typically-Tibetan handicrafts, and then by the alternate cafe culture that has housed itself in Mcleodganj. There are rooftop gardens, Italian joints, organic food cafes, and of course, authentic Tibetan food dhabas. I am amused to see the cafes being frequented by monks & nuns, but gradually become so accustomed to their presence that everywhere I go, my eyes subconsciously search for the deep red colors.

Evening view from a rooftop cafe.

In my head, I had formed a strong association with Dharamsala while in Spiti; everyone I met in the mountain desert had some roots in this relatively lower-lying valley. The spiritual similarities now surface themselves, though the mountains that were bare brown in the Spitian background have now been painted a lush green. I stroll behind some lamas, past blue tents selling knick knacks that remind me of the Tibetan market in Mussoorie, and resist an elderly lady scooping fresh momos from her high stool just outside the monastery.

In the alley that leads to both the monastery and HH Dalai Lama’s house, the first signs of security surprise me. I miss the innate trust of the people of Spiti, but things are different here in Dharamsala for good reason. I expect a solemn ambience at the monastery at this late-evening hour, but I’m greeted by a buoyant atmosphere; it’s debating hour and the monks are animatedly clapping & talking in what sounds like the Bodhi language. I can’t help but smile at the prevailing cheerfulness.

The monastery is beautiful, open and airy, as most monasteries I’ve visited before. I seat myself on a bench in the verandah, and watch the clouds play hide & seek with the Himalayas, as they gradually descend to greet us mortals and reveal to us a gorgeous sunset. No power, I assure myself, can rob the people of such natural beauty, and the conviction that comes with it.

Colors of the sky at sunset.