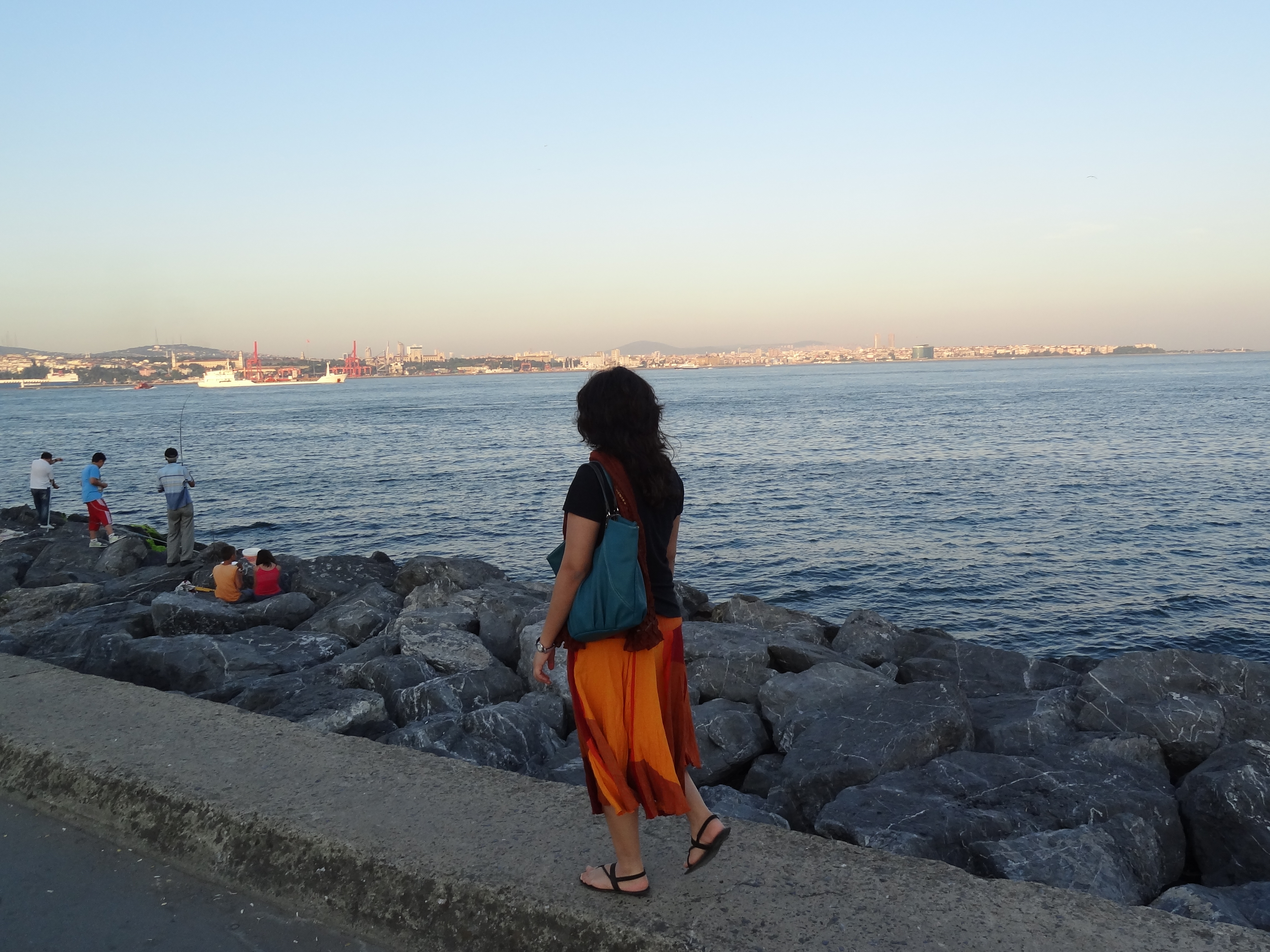 If someone had shown me a picture of the Bosphorus strait before I saw it in person, I would have dissed it as photoshopped; how can a water body in the middle of a major city retain such a cobalt blue color? Istanbul is full of surprises that way, and as I walk to the shore of the Bosphorus through a by-lane of Sultanahmet, the old city, I find myself smiling. Turkish women, wearing colorful head scarves, are picnicking in the park overlooking the blue waters. Their men are precariously balancing themselves on the big rocks along the shore, fishing with such enthusiasm as I haven’t seen before.

If this was India, the sea would’ve acquired a grey color by now and it’s shore conquered by bhel puri wallas. If it was Singapore, they would’ve bought sand from Malaysia and created a fake beach. I like that about Istanbul, it is the way it is; the old and the new, the traditional and the modern, the city and the sea. There is a natural sense of harmony.

I sit at one of the many seaside cafes, on a bench shaded by a tree, which is all you need for a cool breeze to save you from the strong sun. As I sip çay (Turkish tea, pronounced the Indian way aka chai) with a friend like every other person at the cafe, I observe curiously how men here tend to hang out mostly with other men, whether fishing, making a barbeque, having çay, or just idling in the park. I observe the variations in dressing among the women, from short dresses & fancy hairstyles to apparels that clad the body from head to toe, happily dismissing any thoughts on the lack of liberalism or free will in the country.

Men fishing in the Bosphorus.

Women picnic in the park by the Bosphorus.

As the sun starts to set around 8 pm (long are the days here in summer), the sea side life of Istanbul slowly starts receding towards the town of Sultanahmet, whose ancient mosques, minarets, houses and ruins acquire a life of their own in the red and orange after-sunset. Its many by-lanes continue to bustle with life, some transporting us to the pages of history, while others tempting us with the aromas of Turkish bread.

The old city of Sultanahmet at dusk.

We catch a tram to Tophane, an old neighborhood with the city’s best nargile hangouts, and immediately fall in love with the cozy ambiance of the outdoor cafes and the whiff of gul-nane (rose-mint) in the air. This is the Turkey I’ve been dreaming about. As night falls and conversations slow down, I take my leave and walk to Taksim, where the city square is still bustling with life; passersby are buying simit (sesame bagels), pilav (mixed rice) and mussels from roadside carts, well dressed men & women are hitting the night spots, and small shops with doner stands are brimming with people gorging on supper.

A mosque at Tophane.

On a covered walkway, I’m stopped by a Turkish woman, asking for money to help her old mother get a cab to the hospital. Seeing an older woman a few feet ahead seemingly breathing painfully, I consider offering help for a moment, but watching the other nonchalant passersby, my mind darts back to the Turkey scams I read on Wikitravel, and I decide to walk away. A few minutes later, I turn back in search of a place to buy water, and at a doner cafe just after the walkway, I spot the “sick” mother & her daughter gorging on a kebap! I dart them a glare and can’t help laughing as they smile back with a hint of hostility.

Back in my small by-lane neighborhood of Taksim, my Turkish brother-sister hosts found via Roomorama, are still awake to let me in, ask about my day, and tuck me in for a good night’s sleep. It’s just my second day in Istanbul, and despite a near scam, I’m already in love with the city and its laid back way of life. If I stay here any longer, I’ll never want to leave.

Have you been to Istanbul? Did you fall as much in love with the city?