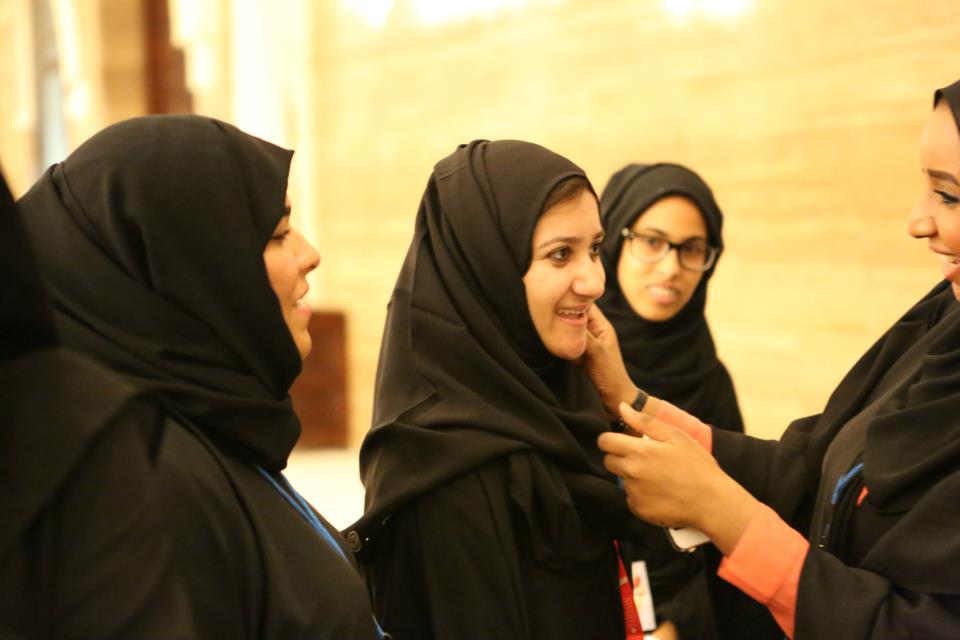 Wearing a flowing black abaya, my head covered in a black hijab, I enter the gracious dome of the Grand Mosque of Bahrain. Under the high, intricately designed ceiling, a massive open space appears to welcome us – Christians, Jews, Muslims, Hindus, Free Thinkers from over twenty countries – with arms wide open, into the frontiers of Islam. We gather in a circle, around a scholar of Islam, ready to fire questions related to the religion, that we have harbored since stepping foot in Bahrain, or much before.

Arabic coffee is served, sip by sip in the traditional Bahraini way, and the topics slowly change from conversion to after-life, from karma to the morality of fornication and stone pelting.

I choose to kill the elf in the room by asking about the inequality of rights among women and men, and below is a snippet of the conversation that ensues (in my own words):

Me: I’m curious to understand why the interpretation of Islam is different in different countries, when the Quran is considered the ultimate word of god.

Mawlana: How do you think the interpretation is different? Can you give me an example?

Me: For instance, women in Bahrain can drive and to a certain extent wear what they choose, while in its neighbour Saudi, the same is not true.

Mawlana: This has more to do with the cultural differences in the countries, and it’s true that some try to use religion to justify it. As far as women are concerned, there are some rules that the Quran dictates they follow – like they should cover their bodies at all times when they are around men, so they are not looked upon with lustful eyes.

Me: Does that rule apply to men too?

Me: I’m asking because the world over, we are fighting for equality of rights between women and men, but if the “word of god” itself suggests that the two don’t have equal rights, then is this equality even worth fighting for?

Mawlana: It’s not that men and women have unequal rights as per the Quran. They have different rights. Men have the responsibility to provide financially for the family. Women don’t. However if they do, they do get extra credit.

The debate continues, but truth is, none of us, with our feisty stance on women’s rights, is even expecting to find a satisfactory explanation. There are many ways to look at the debate, and many theories to explain the misinterpretation of the book. But we have to accept that this, like every religion, has its skeletons to deal with.

The call for prayer breaks our lines of thought, and the men make their way to the central area of the mosque to pray together. The Bahraini women among us start walking towards a separate area, and ask anyone of us interested in praying, to follow them. Out of curiosity, I do.

The men pray in the mosque. Photo by Prathamesh KriSang.

We stand in a straight line. Their eyes are shut. Mine remain open to be able to follow their actions. We raise our hands, their lips shivering as they pray. Allah-u-akbar. We fold our hands over our chests. We raise our hands, we bow. We kneel, we touch our foreheads to the ground. Standing up, my loosely tied head scarf falls. My mind races: should I break the drill and bend down to pick it up? I decide not to. We raise our arms. Someone steps up from behind, picks up my scarf, ties it on my head. We continue praying. The music of the recital is soothing to the ears, calming even. There is serenity around us, and within us. On either side of me, I hear the women sobbing. I look left, then right, concerned. They are deep in prayer. The music ends. We look right, then left, to greet each other. Their eyes are red, but there is peace on their faces. We slowly walk back to join the rest of the group.

The traditional meets the modern! Me in a hijab. Photo by Prathamesh KriSang.

Later that night, I ask a Bahraini friend why the women were crying while praying. They must be deep in prayers, asking for forgiveness or giving thanks, he says.

The photographs in this post are taken by my friend and photographer, Prathamesh KriSang. Find him on Facebook.

Note: I visited Bahrain as part of the Discover Bahrain program; opinions are always my own.