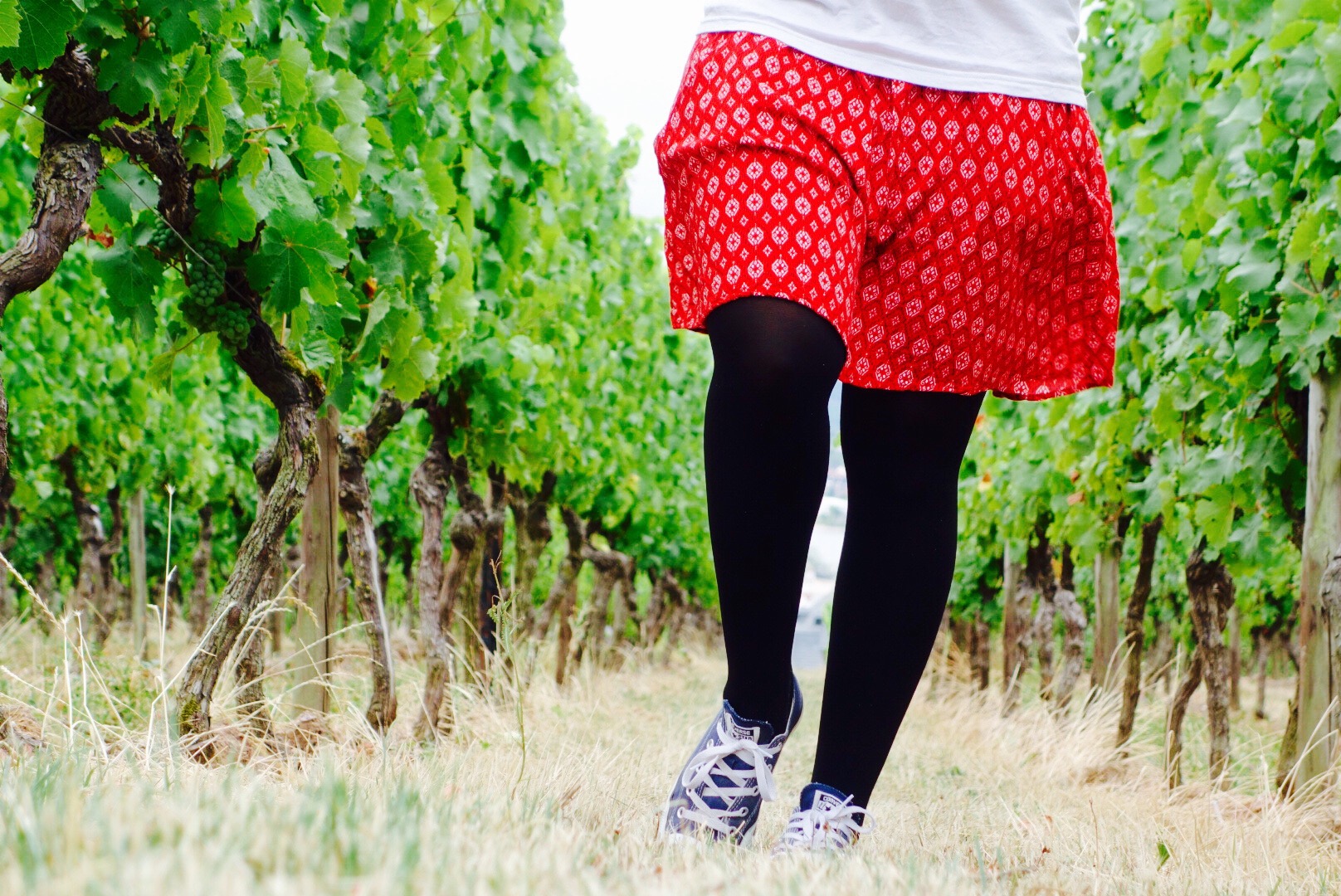 I had an unshakable image of Germany in my head – drinking freshly brewed craft beer at an open-air beer garden, hearing locals cheer “prost” with every chug and watching women dance in traditional dirndls. But two weeks ago, when I arrived in the Rhine Valley, an hour from Frankfurt, that image was shattered.

The Rhine River flowed gently amid hills covered in steep vineyards, Rudesheim’s cobble-stoned streets brimmed with wine stalls, wine gardens tucked away under vines replaced beer gardens, and my first drink was not a Radler (like on every other trip to Germany) but a Riesling from a small family-run winery!

A moment on solitude on the hike above the Rhine river.

I found myself in Rudesheim as part of the Must Love Festivals project, which has bloggers traveling across the world to showcase quirky traditional festivals! Here’s why the Rüdesheim Wine Festival is a great introduction to Germany’s lesser-known wine culture:

Hiking meets wine-tasting in the vineyards

The vineyards of Rudesheim.

My withdrawal symptoms of Georgia gradually dissipated on the first afternoon, when the festivities began with a hike through the vineyards of Rudesheim! Barring me and two other English-speakers, the forty odd people were all locals from the Rheingau region and other parts of Germany, and along the seven kilometre hike, wine growers from Rudesheim greeted us and offered us their finest wines to taste. A surprising yet intimate way to bond with this wine region and get into festive mode.

Also read: #NotJustBeer: Why I’m Going Back to Germany

I’m no party animal and would go to great lengths to avoid a party where I don’t know anyone (yeah, the introvert), but this one was dedicated to “wandering shoes” – how cool is that? It was a party the townies threw for the hikers upon our return, complete with a mini parade on stage, a lot of dancing and a lot more wine.

Wine in the vineyards.

Considering the number of people who made it to (or have even heard about) the Rudesheim Wine Festival, I thought it was a pretty recent affair – but I was wrong. For 81 years, Rudesheim has proudly celebrated its love affair with the Riesling, and I heard that dwellers of the Rheingau region await it all year long. These days, there are wine festivals through summer and autumn in every village along the Rhine and the Moselle, but Rudesheim Weinfest is one of the oldest and most traditional. That is reason enough to put on your party hat and coincide your Germany trip with this festive weekend in mid-August.

Rubbing shoulders with the “Wine Queens”

The Wine Queens of Rheingau.

In the olden days, wine queen was the figurative title bestowed upon the daughters of wine merchants. The tradition has evolved since, and today, each wine-growing village in the Rheingau region has a wine queen – the ambassador of the village’s wineries and a warehouse of wine knowledge. Wine Queens from all across the Rheingau meet annually at the Rudesheim Wine Festival, and watching these ladies parade around town in a special train, I felt like I was  transported to another era.

A (different) taste of German culture

Getting my Riesling on!

On the last night of the wine festival, after all the tourists (from other parts of Germany and the cruise ships that dock daily at Rudesheim) had left, I walked in on a fascinating gathering of locals in the town square; they sang songs about Rudesheim and the River Rhine, drank wine late into the night, gorged on freshly baked flamkuchens, and danced uninhibitedly. I think that also forever changed the image of German people for me!

Also read: Incredible Ways to Experience the World of German Wines (including sleeping in a wine barrel!)

There are wine festivals across the Rheingau region through summer and fall. If you’re going this year, catch one of these:

Have you experienced a traditional festival in a different country?

Note: I travelled to Rudesheim as part of Must Love Festivals, and was hosted by German National Tourist Board and Expedia. Opinions here are always my own.