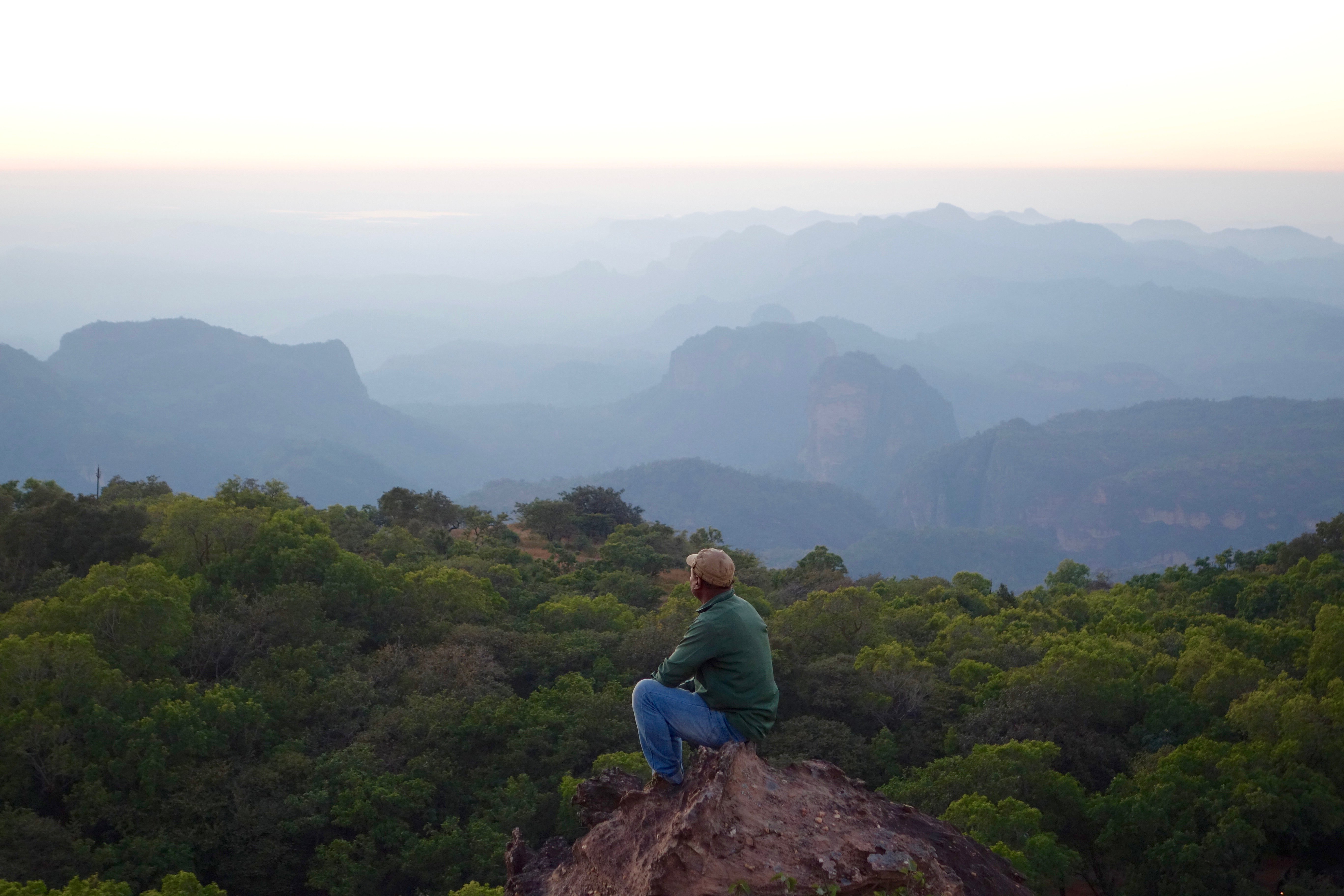 My adventures in Satpura National Park, including Satpura Tiger Reserve, the Denwa River and Pachmarhi hill station in Madhya Pradesh, while staying at the incredible Forsyth Lodge.

The forest is so silent that I can only hear the rustle of the sal leaves under our feet. The white, barren ghost tree holds my gaze awhile. The sun’s golden rays shine through the tree’s branches, as the forest sleepily awakens. Our naturalist and guide are deep in discussion about the previous day’s unexpected bear sighting. They suddenly stop in mid-conversation, for the distinct sound of a sambar deer’s alarm call has broken the unusual silence of the forest. A predator – most likely a tiger, bear or leopard – is in the vicinity. As we head in the direction of the deer’s call, langurs chime from the trees above, their cough-like alarm call giving me goosebumps.

Perhaps you have been on a safari in an Indian national park, and felt the hair-raising excitement of being on a predator chase? I felt it too, except mine was laced with a tinge of cold fear.

Because we weren’t in a jeep as we drew nearer to the alarm calls. We were on foot… with only a stick and pepper spray to protect us from a potential predator in the forests of Satpura National Park in Madhya Pradesh!

Over the years, I’ve fallen in love with the protected national parks, tiger reserves and wildlife sanctuaries of India in Madhya Pradesh, Maharashtra and Uttarakhand. Including Panna, Bandavgarh, Kanha, Pench, Tadoba and Jim Corbett. But in Satpura National Park, while staying at the environmentally-conscious Forsyth Lodge, I fell even more in love with the forests, the rivers, the sunsets, the hills, the stories, and starry, starry night skies.

Here are all the reasons Satpura National Park is unlike any other I’ve been to:

Floating in the mist: Canoe safari on Denwa River

As an orange ball of fire rose from the misty horizon, we floated along silently, the stroke of each paddle taking us further from the roar of jeeps and the chatter of people. The Denwa River, perhaps fierce and free-flowing once, meandered gently after being dammed several kilometres from here. On its shores played snipes and wagtails, and grazed wild boars, oblivious to the three figures on our rustic canoe.

I’ve always associated early mornings in Madhya Pradesh’s national parks with the rumbling of jeeps, but to see and hear the forest wake up without feeling like an intruder, was my kind of safari.

Footsteps in the forest: Walking in Satpura Tiger Reserve

As we followed the alarm calls of sambar deer and langurs on foot, I shuddered at the idea of sharing the ground with a tiger, leopard or bear. The four of us – my friend and I, and our naturalist and guide, barely took a breath in those few minutes which felt like an eternity, as we tip-toed closer to the dense foliage which seemed to be the sight of the commotion. Adrenalin rushed through my body and goosebumps covered my arms, as we quietly speculated what the predator could be.

Then just as suddenly as the alarm calls had started, they stopped, even as I imagined hoarse breathing piercing my ears. Too bad we were no tigers, for a bunch of jeeps and their curious spectators were gawking and flashing their shiny cameras at us when we emerged from the forest to cross the nearby jeep trail!

Also read: Wildlife tourism: Are we saving the tiger?

On two wheels: Cycling in the buffer zone

It is one thing to walk in the safe company of a naturalist and guide, quite another to be one of two lost souls cycling through the buffer zone of Satpura Tiger Reserve. We crossed blooming yellow mustard fields, carried our bikes across a dry riverbed (presumably having lost our way), and cycled on the edge of a deep gorge, with no plan B if we came face to face with a big cat. Oh, the thrill! Luckily for us, the wilderness was alive with chirping, and the only eyes that met ours were those of eagle owls, camouflaged in the bushes.

Also read: Panna National Park: The most beautiful in India?

I couldn’t shake off the idea of Panchmarhi, a hill town tucked away in the vast Satpura National Park, and jumped at the chance of driving there with my naturalist from Forsyth Lodge, two hours from Satpura Tiger Reserve. Those winding roads, dense sal forests and British-era churches made me forget that I’m still in Central India. Away from the characterless town, we hiked with a renowned local guide to secret panoramic sunset spots, a hill with almost a dozen vulture nests (viewed from a safe distance across a gorge), and spotted the rare tree shrews.

The biggest surprise – driving at night to an open field to see a million twinkling stars in the night sky above us… and spotting a civet running into the bushes as we drove back!

With much anticipation, we took the public boat across the Denwa River and hopped on to a forest jeep on the other side – because those forest trails, brimming with activity on the ground and up in the air, never fail to get my adrenalin racing. A mugger crocodile basking in the sunshine on the banks of a pond with its mouth wide open; a wild gaur with a one day old calf; a giant squirrel playing in the branches of a tree; magnificent birds (my memory always fails me on names); a jungle cat in the bushes; a sloth bear casually nibbling on grass and crossing the path before us, and another one wandering further into the wilderness… oh, can I go back to the forests of Satpura already?

Confession: I feel sorry for those who miss out on the wild ways of the forest by only being interested in spotting a tiger.

I can still close my eyes and walk by the light of dimly lit lanterns, my head turned skywards as stars begin to appear everywhere above me. I can still hear stories from Greek Mythology, of Orion and Artemis, as we decipher constellations in the dark skies. I can still taste mahua – a local liquor brewed from mahua flowers (the sloth bear’s fav) – as we talk about the day’s sightings with the naturalists and fellow travellers. Those pre-dinner drinks and starry skies on the rooftop of Forsyth Lodge… I can’t wait to go back someday!

Also read: My most memorable sunrises, sunsets and night skies of 2016

The nearest airport to Satpura National Park is in Bhopal, from where the park is a 3-4 hours drive. It’s worthwhile stopping at the UNESCO World Heritage Site – Bhimbhetka Rock Shelters – enroute.

I absolutely loved my stay at Forsyth Lodge, located in the buffer zone of Satpura Tiger Reserve. The lodge was set up by a naturalist who has been instrumental in bringing a conservation-focussed model of tourism to Satpura. The huts are built with mud and slate in local architectural style – minimalistic yet luxurious – and only 10% of the total land has been used for building. The remaining barren acres are being transformed with indigenous trees and shrubs. Most of the produce is sourced from local farmers… a special shoutout to the chefs for some incredible vegan food and desserts (inform them of food preferences beforehand).

Like most national parks in India, Satpura is closed from July to September for the rainy season. Spring and autumn are refreshing, weather-wise, and perfect to experience the beauty of the forest. Summer is sweltering hot but great for sightings.

Have you been to Satpura National Park? Which national parks in Central India do you love most?

I was hosted in Satpura by Forsyth Lodge; lucky me!