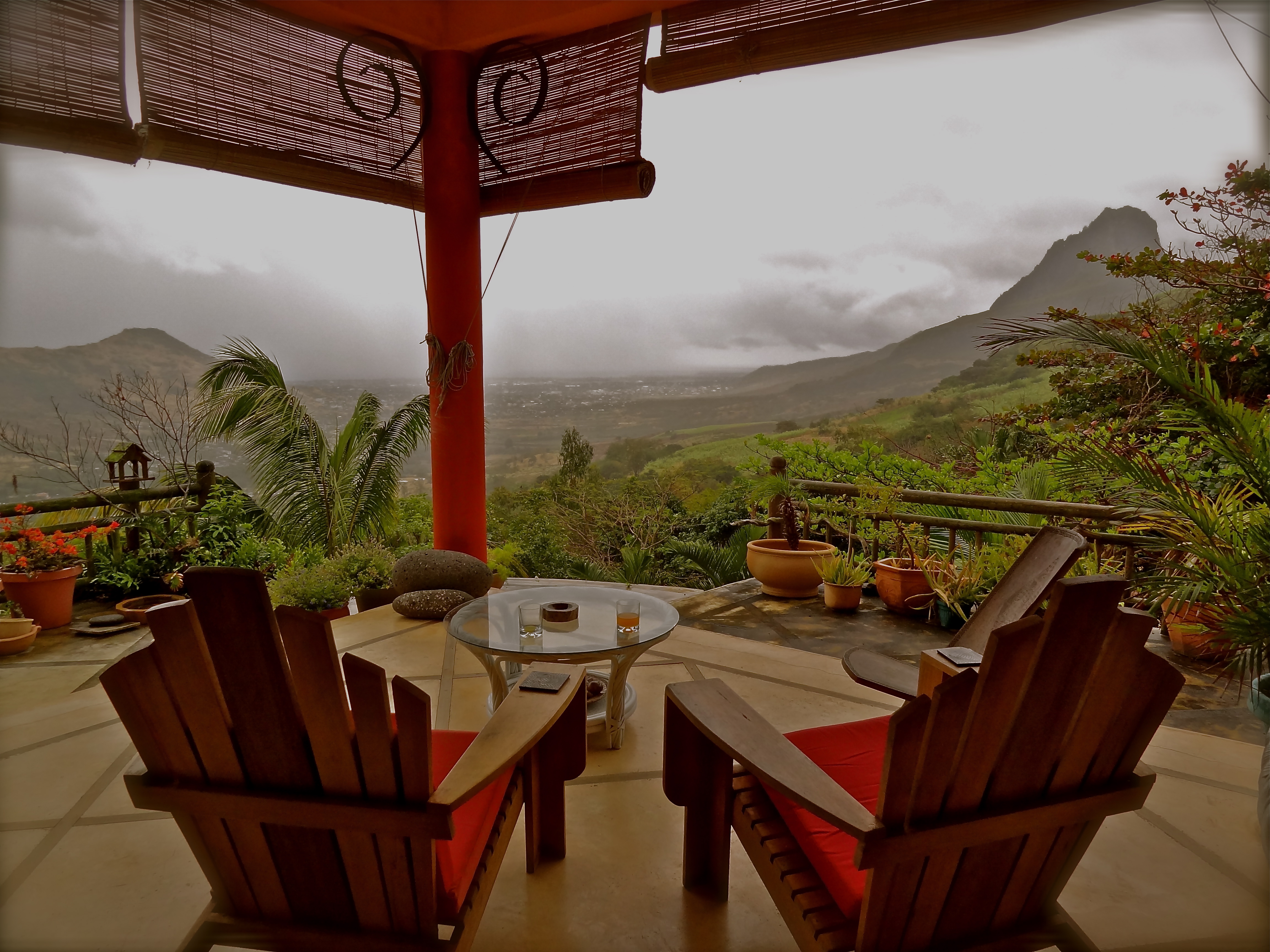 We leave behind the traffic of Port Louis and maneuver our way through a small winding road that leads us uphill for a good twenty minutes. At an unassuming orange-colored French villa where we pull up, the warm hospitality of Jean-Michel and his wife Joan awaits me. We exchange niceties and my request for water quickly gets upgraded to a rum punch. I’m in Mauritius after all, and it doesnt matter that it’s just after mid day or that I’ve just landed here after a sleepless 7.5 hour flight from Delhi!

After a quick glimpse at my homely room, I join my hosts in the verandah of the villa, which is designed to be open on all sides, except the shelter above, and offers the most spectacular views; the green valley below, Port Louis beyond and a glimpse of the blue sea further ahead, the sugar cane fields and patches of vegetable farms at eye level, and the rocky mountains above. This is not the tropical postcard Mauritius you see in travel magazines. This is one of the last surviving green pockets of the island that haven’t been infiltrated by tourism yet, and this is the attempt of a Frenchman, native to the island, to keep it that way with his ecotourism efforts.

We talk about the weather and the soil, the rum and the food, the sugarcane fields and tourism, and Jean-Michel tells me that Vallée des Prêtres, where we are right now, is predominantly a Hindu village, where rituals like coal walking and body piercing (thaipussam) are still practiced. Indian immigrants arrived here in Mauritius in the 19th century, from Bengal, Tamil Nadu, Bihar and UP, to work on the sugarcane plantations during the British rule, carrying with them nothing but mental imagery of life and religion in India. More than 150 years later, ancient Indian traditions have survived the independence, development and westernization of the island, and the influences of inbound tourism. As have the Hindi and Bhojpuri languages, which are most fluently spoken on the island, after Creole and French.

I settle into my cosy room, whose large windows and balcony face the valley and the fields. When the sun hides behind the clouds, I set out for a hike in the mountains above. 700 feet above the ground, these rocky mountains jut out almost spontaneously, their peaks taking on shapes ranging from a resting Egyptian mummy to a pyramid of finely balanced stones. As I walk along the sugarcane fields, a small group of women laughingly nod at me, and seem delighted to hear that I speak Hindi. On their recommendation, I follow a dirt path leading up towards the mountains, and find myself at a clearing surrounded on all sides by the mountains, except a small opening towards Port Louise below and the sea beyond. I later verify that the valley, as evident by these landscapes, was formed out of a volcanic eruption, during which the lava flowed towards the sea; that also accounts for the shimmering city lights I’ll see in the region after dark.

See any shapes in that peak?

The lights of Port Louis from Mon Choix.

The clear blue sky suddenly turns ominous with dark clouds, and the strong winds leave the sugarcane fields swaying with an almost magical intensity. The sun disappears before its time, and I scramble to find my way back home in the fading light. After a light drizzle, the clouds move west, revealing a starry sky; it takes me some time to acquaint myself with the alignment of the stars, halfway across the globe, and I end up spotting only the Big Dipper. Conversations and drinks follow, and I settle in for the night, thinking that this face of Mauritius may never find its way to postcards or tourism maps, but anyone who wanders along these forgotten paths can never leave untouched by their sheer beauty.

Breakfast in the mountains!

If you go to Mauritius, would you like to discover its wilderness too, or is the ocean too tempting to stay away from?