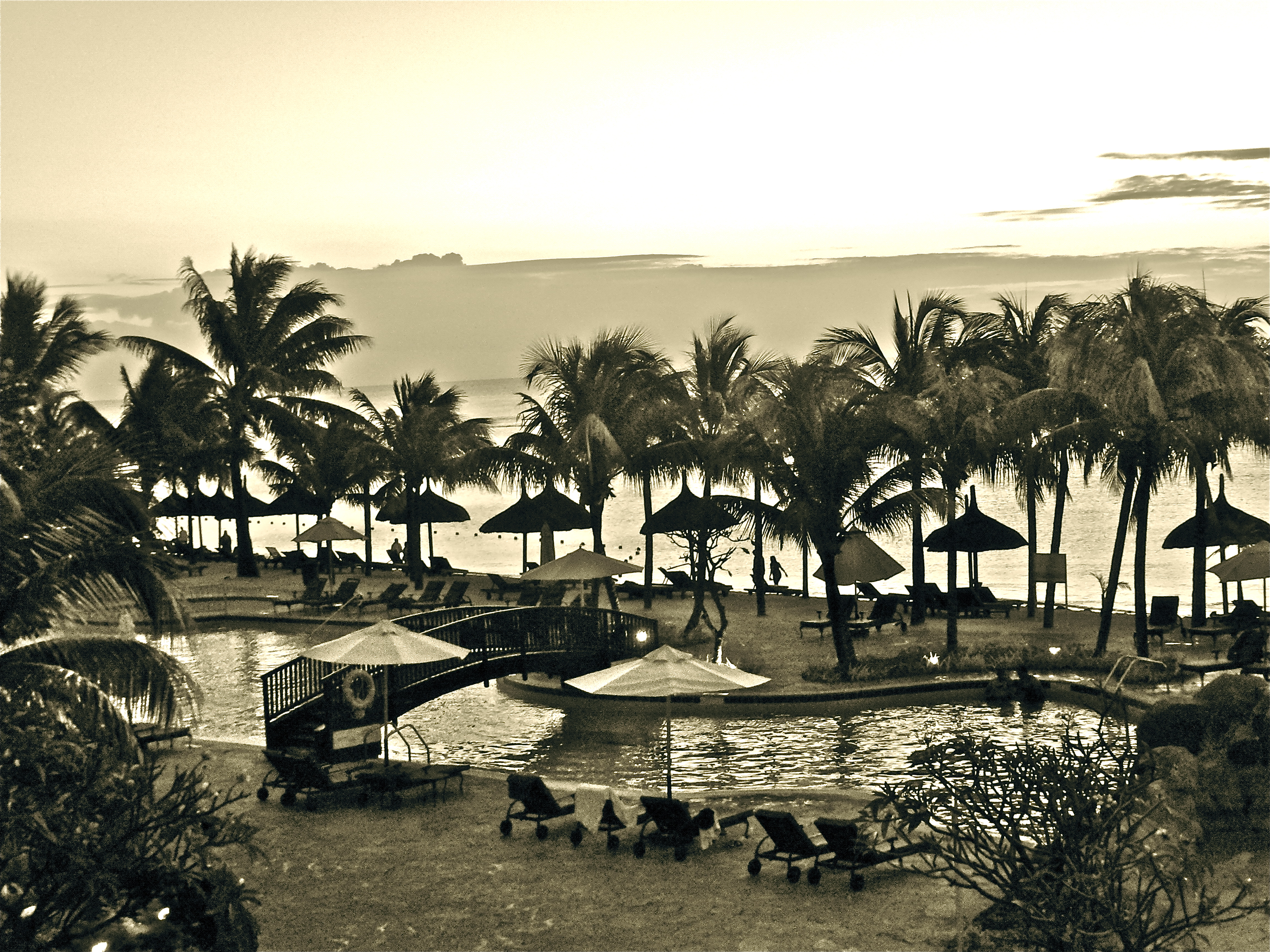 Since I announced the Dreaming of Mauritius Contest on my blog 1.5 weeks back, a lot of you have tweeted and emailed me asking what it’s like to stay at Le Meridien, and why I chose a luxury hotel over my typical preference for boutique hideouts. The answer to the latter is that I didn’t want to miss out on the paradisiacal island experience that has put Mauritius on the world map, and a large part of this experience depends on where you choose to stay. The answer to the former? Brace yourself, this might make you want to jump to their website, pack your bags and head right out that door!

I’ve been so pampered by all the family-run lodges, homestays and B&Bs that I’ve stayed at, that while prepping to move out from my hideout in the mountains of Mauritius with a French family to one of the biggest luxury resorts on the island, I continuously wondered just how much I would miss the personal attention and interaction. Turns out, not much at all.

From the moment I walked in to the Le Boi Cheri bar-cum-lobby-cum-reception, I only made friends; the bartender who wouldn’t reveal the recipe of the spicy welcome drink, the fellow hiking enthusiast at the reception, the buggy driver who would never refuse a ride, and the water-sports instructor who I spent hours talking to about life on the island. I’ve stayed in hotels before, and I’ve stayed on islands before, but the genuine friendliness of the staff at the hotel, unaffected by whether or not they were tipped, was something that immediately blew me away.

I’ve already teased you enough with pictures of my cosy room overlooking the Indian Ocean, but it reminded me precisely of what I had envisioned for my digitally nomadic self. I spent hours sitting in my private balcony, mesmerized by the changing shades of blue on the ocean, spotting colorful birds in the garden directly below my room, and watching the sun set from behind the clouds at the end of the day, all while working on my (well travelled) Macbook.

After a day of riding around the island on my scooter, I would return to find indulgent dark chocolates decorated on my pillows, and have the option of either giving in to the temptation of a relaxing bed or soaking myself in the bathtub with hot steaming water. It was these little indulgences, I realized, that I missed having on my travels every once in a while.

I almost always opt for Aroma Therapy at any spa I go, but in the spirit of going local, I opted for the Sugar Ritual Spa treatment at the Explore Spa at Le Meridien. In fifty minutes of bliss, I was foot-washed in lemon water, scrubbed with locally produced sugars, and cleansed and massaged with oil and honey. I’m convinced my skin smelt and felt sweeter than it ever has before!

I came to the resort with a plan to set off every day to discover a new corner of Mauritius, but ended up spending much more time at the resort itself. I tried water skiing on the choppy waters, went snorkeling in the bay, took a glass bottom boat into the ocean, caught a Tuesday evening traditional Sega dance performance at the Le Boi Cheri bar, and  sneaked around to watch a small wedding affair by the beach. Between trying another rum cocktail at the pool-side bar, catching another sunset at the jetty, swimming for a few more minutes in the pool, and dreamily soaking in the colors of the ocean, time flew.

Saying “I do” by the beach, for the romantics.

When I did convince myself to step out, I quickly realized that I was perfectly placed in the north of Mauritius to ride my two wheels through the sugarcane fields, along the coastlines, and right up to the northern tip of the island, and still be home before the light faded away.

The Beach & The Pool

A kilometer long private beach, complete with sparkling white sands, turquoise blue waters, canopies, lounging beach chairs, a swimming pool, and a pool side bar;who would want to step out of the resort, right? I spent my entire first day lounging on a beach chair with a Sega or a Planter’s Punch (both cocktails made with the local Mauritian rum) in hand, and then at the jetty, which extends right into the ocean, and feels a little like standing at the deck of a ship and looking at nothing but the horizon. Interestingly, it seemed as though the ‘honeymooning’ code of conduct never let more than one couple at a time occupy the jetty, except at sunset, and I played my part to reflect the privacy of the lovestruck!

Lounging by my own private beach.

I had read about the Nirvana wing, but up until I saw its infinity pool, I couldn’t fathom why anyone would want to pay a premium for it. You can never get enough of the illusion of the pool seamlessly blending with the ocean.

Nirvana: where the pool meets the ocean.

I was surprised by the dearth of continental cuisine in most of Mauritius, but the La Faya restaurant at Le Meridien happily bridged that gap. The soups were excellent, and the pastas were made to order without any fuss. I had a dinner engagement on one night and ended up eating a double dinner to satisfy my La Faya craving (and now you think I’m a hog)! Unfortunately I could save space for dessert only once, and the combination of fried chocolate, marshmellow, chocolate sauce, and ice cream was sinful. The seaside setting perfectly complimented the food; I spent too many nights sipping Sega cocktails to the sound of the crashing waves and a thousand stars in the sky.

A Sega to start the night.

The 180 Degrees restaurant satisfied my need for choice, with themed buffets every other night, ranging from Mauritian Creole cuisine to Oriental food, with a dedicated corner to Indian dishes.

The vegetarian options on the menu were quite limited as compared to the restaurants, but room delivery from the restaurants had to be ordered way in advance. As someone who works nocturnally, I ended up eating a LOT of vegetarian submarine sandwiches!

The Same Drinks Across All Restaurants

Is it common practice? I’m not exactly complaining because the rum cocktails were all I needed, but the human mind automatically craves choice (especially after a few drinks).

WILL I RECOMMEND IT?

My cosy room, sleeping to the sound of the waves, waking up to see the turquoise blue waters from my balcony, the indulgent dark chocolates left on my bed every evening, the mediterranean food, the warmth of the hotel staff, chilling with a Sega cocktail by the beach, watching the stars from the jetty, I loved all of it. And especially the Sugar Ritual Spa, I still dream about it.

How could I not love it?

~ Whether the regular or the Nirvana wings, opt for an ocean view room. You don’t want to miss waking up to the turquoise shades of the Indian Ocean.

~ While planning your to-do list, speak to the concierge and probe for recommendations according to your taste; the island may seem tiny, but there’s enough to keep you on your feet for days, and no one knows the local treasures better than the local people.

~ Opt for a half-board stay, which comes with a ton of complimentary water sports and activities that you can try as many times as you want. If you have stronger shoulders than me, you’ll become a pro at water-skiing and windsurfing before the end of your stay, and if not, there’s glass bottom boating and snorkeling amid colorful corals, fish and whatever else you can spot in the ocean.

~ There are revolving buffets at the 180 degrees restaurant, so be sure to check what’s on there before you head to La Faya. Or head to La Faya anyway!

WILL I STAY AT LE MERIDIEN ILE MAURICE AGAIN?

Maybe I’ll go back for a table for two 😉

Note: I was hosted by Le Meridien Ile Maurice on my trip to Mauritius, but opinions, as always, are entirely my own.

Would you like to stay at Le Meridien on your trip to Mauritius? What do you think you’ll like most?

Enter my ‘Dreaming of Mauritius’ Contest to win a four nights stay for two people at Le Meridien Ile Maurice, Mauritius. If you win, you can travel anytime until September next year!