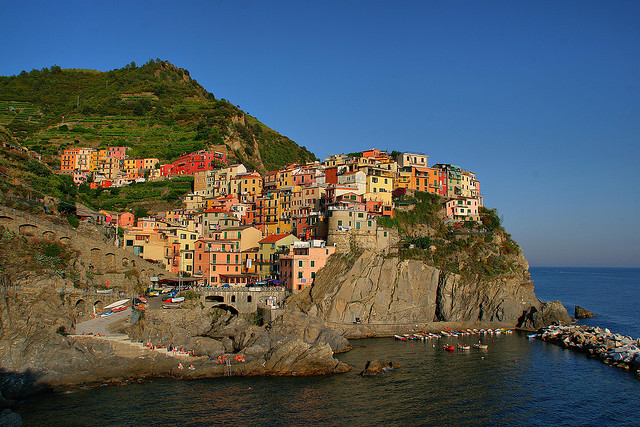 Cinque Terre is the collective name for five villages perched upon hills by the Italian riviera. The landscape here is truly unique; on a raised stretch of land by and above the azure waters thrives a whole civilization.

Azure waters. We could see the base of the Mediterranean Sea even from halfway above the hiking route.

We stayed in Montorosso Al Mare, which happened to be the first of the villages in our journey from the French border via Aosta & Torino. We were surprised to land among swarms of people even in the month of May, many of them tourists out for a weekend of sun and sand.

Montorosso, perched upon the azure water.

The other villages are 2 hour hikes away, through narrow mountain paths cut into steps. That’s perhaps the best way to get an aerial view of the perched villages, but we chose the 10 minute train route instead. According to both lonely planet & wikitravel, Vernazza is the most picturesque of the 5 and hence also the most commercial. It was hard to look beyond the crowd and validate this claim.

More people than mountains or water at Vernazza.

Riomaggiore was a breathe of fresh air in comparison, and from here it’s easy to see, even on land, how a large part of the village is perched upon a stretch of land arising out of the water.

On the bus ride to Porto Venere, another small town by the riviera, we realized that the perched landscape is almost typical of the Italian riviera. Cinque Terre‘s claim to fame is really the hike between the villages, which took farmers a thousand years to carve amid the mountains.

Porto Venere has the ruins of what seems like an old fort and cathedral by the Mediterranean Sea. The architecture is as beautiful as the landscape, as elsewhere in Italy. It’s touching to think of the amount of effort and warmth that goes into anything that’s made in Italy and France (and probably elsewhere in europe).

Porto Venere. An old cathedral & fort by the Mediterranean Sea.

Despite it being my first visit to Cinque Terre, I can imagine the serene beauty of the villages sans the tourism. I wish we could find a way to restore the original charm and typical life in the region.

Also read:
From Italy with love.
Reflections on Lake Garda.