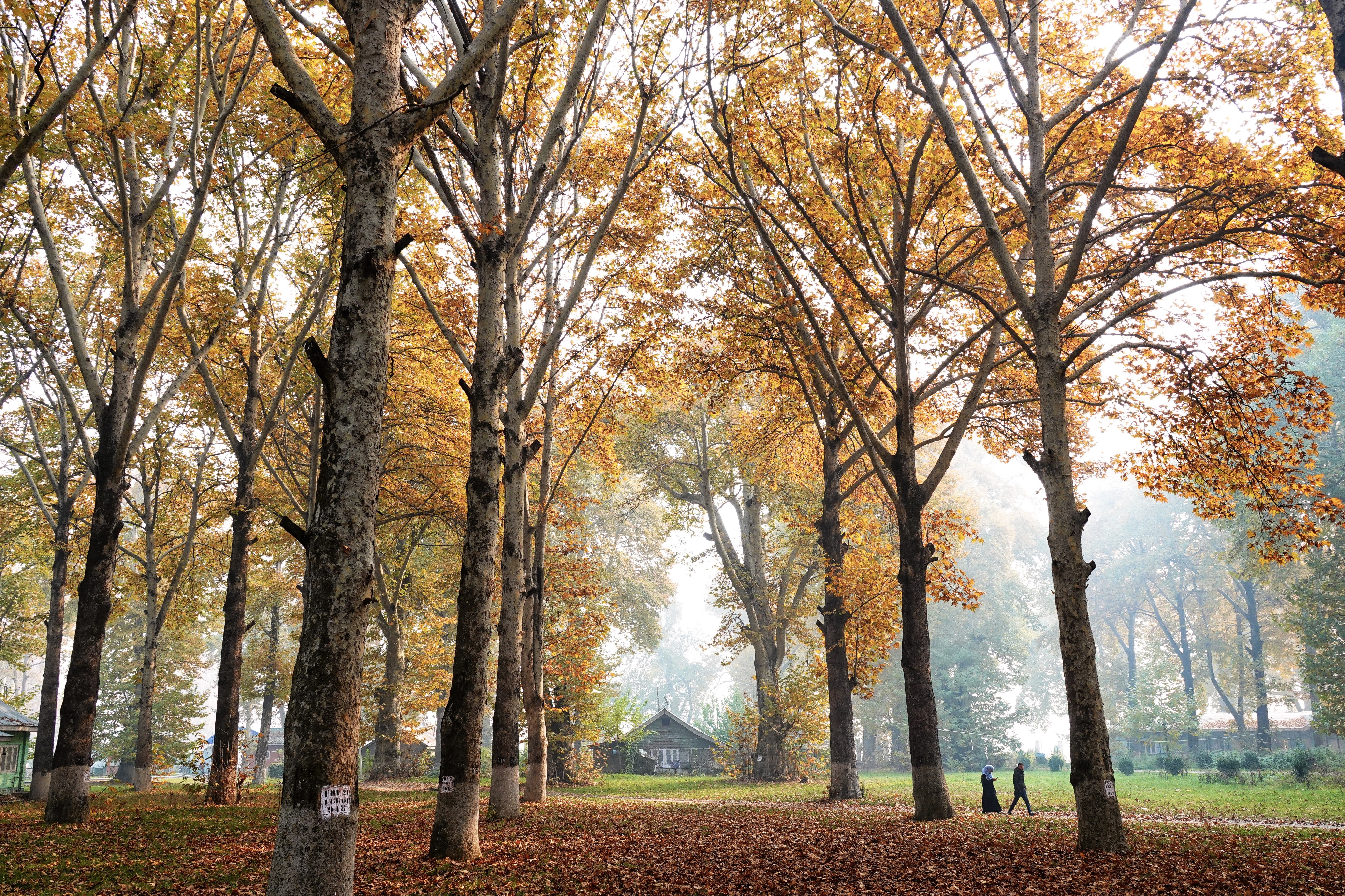 Two weeks before we set out for Kashmir, some heartbreaking targeted killings had disrupted peace in the valley. Worried about whether it would be safe to travel, we contemplated cancelling our long-awaited trip.

To help decide, I sent a message to our Airbnb hostess in Srinagar, asking about the situation on the ground. She replied, quite astutely, that there’s trouble everywhere but only in Kashmir is it constantly reported in the media.

Others I reached out to in Kashmir had similar advice. So we decided to take a leap of faith and arrived in Srinagar on a nippy autumn evening.

There are many layers to Kashmir

On our second day in Kashmir, we drove to the outskirts of Srinagar with a local friend. He turned off the main road into a by-lane, and drove into a desolate, abandoned military compound, with only barbed wires and no sign of human activity.

As my heart skipped a beat while he parked, I began to hear the faint strains of a guitar pour out of a Stalinist-style nondescript barrack. It turned out that we had arrived at one of Kashmir’s only music academies, run by singer duo Irfan-Bilal! Over the next few hours, we heard aspiring young musicians play the ancient rhubarb, and women from far-off reaches of Kashmir play the guitar to Sufi rhythms. The school is bringing about a renaissance of devotional Sufi music by making it more appealing to the youth – who have seen years of turmoil in the valley.

Every single day in Kashmir, we peeled back layer after layer, of Kashmiri history, culture, music, nature and politics – realizing how little actually makes it to mainstream news channels and travel blogs.

Fear, not hope, is the dominant emotion

Having read much about Kashmir, I went in fully prepared to expect military and police presence everywhere. But to see armed officers in bunkers and bushes across Srinagar and other populated towns, patrolling the streets at all hours, often stopping young men on bikes and scooters, is unnerving to say the least.

On a day trip from Srinagar, we had to squeeze our car next to a roadblock as an unexpected convoy of military vehicles whizzed past us. Hoping to create more space for them, our friend took advantage of a short gap between vehicles to squeeze further on the left. But an armed military guard across the road noticed, came to our window, and started scolding him aggressively. He tried to explain, but that only made it worse, so he apologised profusely, fear etched across his otherwise calm face.

Everyone has a story of their relatives, friends or neighbors being picked up over the past three decades. So it’s no surprise that for the ordinary Kashmiri, fear reigns supreme. I met businessmen, students, artists, farmers, guides – and left with the feeling that fear, not hope, is the overriding emotion that drives their decisions.

We had some animated discussions with locals about the relationship between Kashmir and India.

And yet, despite the complexity of emotions that Kashmiris feel towards the country, we were received with incredible warmth as Indian travellers. So many people, from cab drivers to Gujjar families, invited us home to stay or have a cup of kahwa. Acquaintances turned friends went far out of their way to connect us with interesting locals, drove us to places off the beaten track and treated us to sumptuous vegan meals! A local we met on Dal Lake messaged me everyday to ask after my well being while I was in Kashmir.

Also read: Why You Should Drop Everything and Travel to Iran now

But unfortunately not all tourism is the same

For our first 10 days, we pretty much managed to shield ourselves from domestic tourism in Kashmir by virtue of the places we picked to stay and explore. I constantly heard from folks in the sustainable tourism space in Kashmir about the unwieldy crowds and the challenges of overtourism, but began to wonder where all the tourists were.

Then finally, we landed bang in the middle of them, in Gulmarg. I expected a stunning, quiet, pristine spot, but what we encountered were endless queues of tourists lining up to take a gondola into the higher reaches to witness snow (so long that we ultimately sold our tickets and found other hiking trails). We faced constant harassment from guides looking to make a quick buck, got annoyed at boisterous selfie-snappers, and felt heartbroken for puny ponies being ridden by visitors who were perfectly capable of walking.

That’s when I realized that this is likely the only side of Kashmir that many travellers get to experience. The fear bred by media channels compels them to travel like an island, in taxies or tour buses, on the Gulmarg – Pahalgam – Sonamarg route, hardly interacting with everyday life in the valley, and therefore leaving with the same skewed perspective.

And that’s a shame because travelling is supposed to broaden our worldview and challenge our pre-conceived notions of a place and its people.

We spent many a quiet, contemplative afternoon in Srinagar – walking, reading or picnicking under 400-year-old chinar trees, watching their leaves slowly turn from green to orange and red as autumn settled in.

Under the turning chinars, Kashmiri women and men go about their lives in pherans (traditional overdress), carrying a burning kangri (a basket full of burning embers to keep warm) underneath. University students linger after class, chatting or playing cricket amid the chinars. Older men gather at pyends (raised platforms) to smoke hookah.

With it, autumn brings the feeling that no matter how permanent things seem, the times will change, the colors will turn. That’s my hope for Kashmir too.